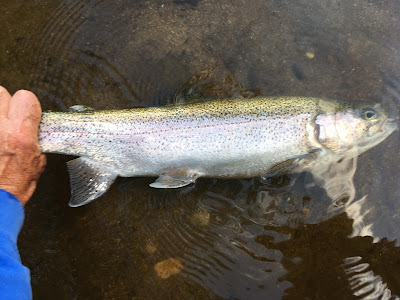 21" Farmington rainbow caught Thursday afternoon by customer & outdoor writer Will Ryan, on a flashy blue nymph, one of Grady's favorite flies. Attractor nymphs like that have worked well here this year, it's not always about exactly matching the hatch (but sometimes it is!), sometimes some flash or a splash of fluorescent color gets the job done better. I often combine a drab, imitative nymph with a gaudier one to give the trout a choice, and then depending upon which fly I'm doing well on, I'll tweak my fly selection.

The entire Farmington River is now Catch & Release from 9/1 until Opening Day in April (21 miles straight from Goodwin/Hogback Dam in Riverton down to Rt 177 Bridge in Unionville). If you see anyone keeping trout, POLITELY inform them that it's C&R now- not everybody is aware of this, especially when it first kicks into gear this month. The state stocked the river a last Friday from just below the Rt 219 bridge in New Hartford, all the way downstream to Unionville. Later this month, the FRAA will stock 1,000+ rainbows & brookies in the upper river- we are still collecting donations to fund this stocking, just drop them in the jar next to the cash register. The more we get, the better the stocking.

Total flow is 139cfs in permanent Catch & Release (C&R)/TMA, and the water temps are close to ideal (upper 50s to mid 60s). Long range highs are running mid 60s to mid 70s, and lows are averaging low/mid 50's. Feels like fall. What this means is you can fish the entire river now, from the dam in Riverton down to the sections along the river walk/bike bath in Collinsville/Unionville. Tricos remain the morning glamour hatch, with the spinners falling when air temps are in the mid/upper 60s. The other morning hatch is the summer/winter Caddis (early to mid mornings). Big Stonefly Nymphs shucks are all over the rocks in fast water, they emerge in the mornings.

The Trico hatch (#22-26 ) has been unusually good in 2017, the spinners are the main event and typically fall in early to mid mornings, but cold nights will delay this to later in the AM. The spinners tend to fall at an air temp of about 68 degrees. They should be all the way up into Riverton by now. Summer/Winter Caddis #18-24 is the other significant AM hatch, usually occuring in early/mid morning. Dry fly wise, afternoons are more about terrestrials, and look for Flying Ants (#18-24) if we get a warm & humid day. Later in the day, look for Isonychia #10-14 (about 4-5pm 'till dark, earlier on cool/cloudy days), small Blue Wing Olives (BWO's) & Rusty Spinners #22-26, and Cahills/Summer Stenos & White Flies #12-16- stay until dark for the best evening dry fly action.