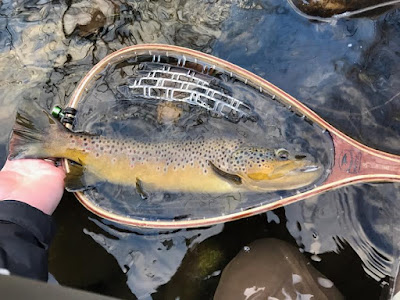 A very nice Farmington River winter brown by UpCountry customer Chris. The water may be cold, but the trout still eat. Looks like a winter wonderland out there, with 2 significant snow dumps over the past 5 days. Weather through the weekend looks good after today,  with most days above freezing, even well into the 40's this upcoming weekend. Total river flow is currently a moderate 163cfs through the permanent Catch & Release in Pleasant Valley/New Hartford (60cfs at USGS Riverton gauge, plus 103cfs from the Still River). Keep an eye out for Winter Stoneflies, first we normally see the Tiny Winter Blacks (Capnia) in February, they run #18-24 on our river, and then we see the somewhat bigger Early Blacks & Early Browns in the #12-16 range (March is the big month for the Early Stones, but they often start to show up in February, especially on milder days).

Look for water temps in the 30's (mid to late afternoon water temps will be the highest, especially on sunny days). You may see slush in the mornings after colder nights, if so just head upstream to Riverton, above the Still River, and it should be slush-free. When it happens, slush normally clear out by lunchtime, unless it's really cold & cloudy. Hatches still include Winter Caddis (mornings primarily, but sometimes into the afternoon), Midges (typically afternoons, but can start earlier), and start to look for Winter/Early Stonfeflies now (see paragraph above). Hatching activity has ranged from light to pretty good, depending upon the day and location. The Winter Caddis hatch best after cool to cold nights (teens to 20's), mild nights actually make for light hatches of them. Nymphing remains the most consistent producer of trout, but streamers are catching too at moments.

Pat Torrey has limited availability his February "Tying the Wet Fly & Soft-Hackle" two-day class, see "Classes" page for info, call store at 860-379-1952 to sign up before it totally fills. Aaron Jasper still has room in his "Dry/Dropper Tying & Fishing" class on 2/25, call store to sign up

Posted by UpCountry Sportfishing at 9:55 AM