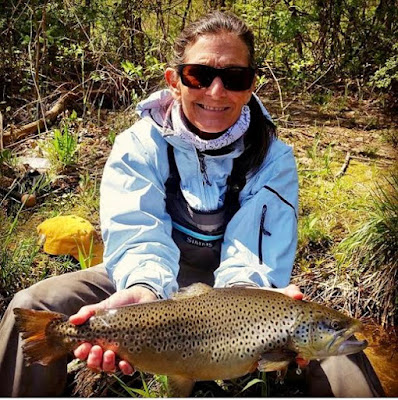 Here's a FAT May Farmington River brown trout Zach's client Francis caught, it taped 20 1/4" in length with a 12" girth- my favorite formula put it at just shy of 4 pounds. That's a solid fish, a multi-year holdover no doubt (clipped adipose & some dorsal fin deformation). FYI I've heard people say that any trout here without an adipose clip or an elastomer tag/dye mark is wild, and that is completely inaccurate. Most of the trout stocked in the Permanent Catch & Release/TMA are indeed marked by the state (about 10,000), but the other well over 30,000 stocked trout are NOT marked in any sort of way, so with unmarked fish you have to look closely (especially at the dorsal & pectoral fins) before you can pronounce it "wild". On a true wild brown, the dorsal should have perfectly straight rays, no damage, and be thin & translucent (as in so thin and transparent you could read a newspaper through it)- being in a hatchery typically deforms the dorsal and causes bents rays with scar tissue/thickening/stiffening. The pectorals should be large and well formed, with sort of an arrowhead shape to them. Look for red on the adipose, red dots on the fish, iridescent gill plates (often with a blue dot), and a nice tail with no flat spots on the top & bottom.

Afternoon Flow Update:
As of 9am this morning, the release from Goodwin/Hogback dam in Riverton was slightly increased (by 61cfs) from 279cfs to 340cfs, bringing the total flow to a high but clear & fishable 824cfs in the permanent Catch & Release (C&R)/TMA as of 1:30pm this afternoon (381cfs at Riverton gauge, plus 443cfs from the Still River). I got 51 degrees for a water temp after work Sunday evening in the C&R/TMA below the Campground, and 47 in Riverton above the Still River. Long Range weather looks nice, with high averaging upper 60s to mid 70s, and lows mostly in the 50s- Wednesday/Thursday will be mid to high 80s! The only wildcard for this week is what the MDC will do with the releases from the dam, as they need get to get Colebrook reservoir down (it's full and then some)- it's likely they will increase the release again as the Still River continues to drop. We did not get as much rain as originally predicted this past weekend, but we did get a decent amount. Keep checking back, we will update the flow situation as it changes.

Hendricksons remain the glamour hatch, with good hatching reported from Collinsville/Canton up through the permanent Catch & Release (C&R)/TMA and at least as farm upstream as Pipeline, with rumors of light hatching up in Riverton. Some of the larger pools (Whittemore,  School Bus, Church, Greenwoods, Boneyard, the Wall, Black Bridge, etc.) may have rising trout, you are looking for spots without a lot of current. This is an afternoon deal, usually coming off sometime between early & late afternoon (2-4 pm is typical, but can vary from day to day), with a spinner fall in the evenings. However, sometimes the spinners mix with the afternoon hatch, and sometimes they fall in the mid/late mornings. The spinners are fickle and don't like cold temps, wind or rain. The hatch, however, comes off every afternoon regardless of the weather. Dunno why, but this is one hatch where the trout seem extra particular, so make sure to cover ALL stages/variations- nymphs, soft-hackles/wets, emergers/cripples, duns (light & dark), and spinners (some with yellow egg sacks too). If they don't rise where you are fishing, be prepared to fish nymphs and/or wets/soft-hackles- I catch some of my biggest trout every year on Hendrickson nymphs and #12-14 Pheasant Tails.

The state stocked the permanent Catch & Release/TMA on 4/28 with the larger & obese Two Year Old Survivor Strain Brown Trout, and on 4/21 they put in the adults/yearlings. The upper river from Whittemore to the dam was also restocked recently. The 2 Year Olds they stocked in the TMA have a left eye red elastomer, and the yearlings/adults have a right eye orange elastomer- all have a clipped adipose fin. The entire river has been stocked top to bottom multiple times now, and there are literally trout everywhere- if you don't catch fish now, you have no excuses anymore! Haha. Many above average holdover and even some wild trout were landed recnetly both in and out of the permanent TMA/C&R. It's a combination of rising water temps & bug activity. We are seeing more & more bugs on mild afternoons including Hendricksons, Blue Wing Olives, small dark Caddis, Midges, etc.

Most of the peak bug activity is in the afternoons, but depending upon the day you may see insects in the AM & PM:  Hendricksons & Hendrickson Spinners (rusty) #12-14, Baetis/Blue Wing Olives #16-18, Midges  #20-26, and a few Paraleps/Blue Quills #18, plus assorted small dark Caddis. If you find mayflies hatching & rising trout, emergers will often outfish traditional dun dry flies- fish #12-14 Hennys in emergers, duns (both light & dark) & spinners (rusty). Hendrickson nymphs #12-14, Frenchies #14-18, Quasimodo Pheasant Tails #12-18, Caddis Larva #12-16 (olive, green), Baetis/Blue Wing Olive nymphs #16-18, and bigger #8-12 Stonefly nymphs have been hot of late, especially in the AM. Make sure to also try Attractor Nymphs #14-18, Mops, San Juan Worms/Squirmies, Green Weenies, and Egg Flies. Streamers have been very effective on both the fresh stocked trout and also the big holdover and wild fish. Experiment with colors & retrieves to find what will attract the trout- olive, black, and white are good starting points, but also try brown, tan, and yellow or combinations thereof.
Posted by UpCountry Sportfishing at 8:59 AM