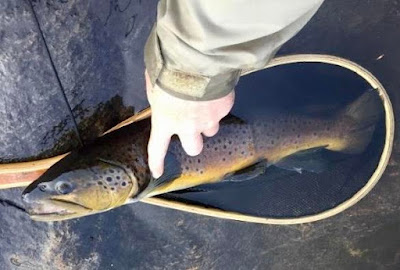 The unseasonably warm temps of late has the trout fired up, some bigger browns have shown up in angler's nets this week. Shaggy (aka Tyman) caught this perfect 21" male brown Thursday on a nymph- he said the fish was laying in relatively fast water. Total flow is currently a normal 382cfs through the permanent Catch & Release in Pleasant Valley/New Hartford (97cfs at USGS Riverton gauge, plus 285cfs from the Still River)- Riverton flow is low but improved due to snowmelt, and below the Still River we finally have a normal late February flow! The spring-like conditions also has the bugs active & ahead of schedule, we are seeing all of the Winter/Early Stones- Tiny Blacks sz 18-24 (Capnia), Early Black sz 14-16, and Early Brown sz 14-16. Sometimes trout will rise to the Stones, but typically they choose to feed on the nymphs. Specific imitations work, as do generic flies like Princes, Pheasant Tails and Hare's Ears. #18 Midge larva/pupa nymphed deep are still very effective. Despite "the experts" saying the best fishing in the winter is 11am-3pm, I often do best from mid-afternoon until dark, when water temps are normally highest (except during times of heavy snowmelt). Expect water temps in the upper 30s to low 40s, depending upon time of day. Other than the Winter & Early Stones, hatches include Winter Caddis sz 18-24 (mornings primarily, but sometimes into the afternoon), and Midges sz 22-32 (typically afternoons). For Midge larva & pupa nymphed deep, you can go #18-20 (black, olive, red).

The new book "Nymphing The New Way: French leader fishing for trout" is back in stock again- it focuses on Euro-style nymphing using very long leaders, which is deadly indeed. The first batch sold out in a week or two. Keep your eye out for "Nymph Masters" by Jason Randall coming out in March/April (they keep changing the release date), and this batch is now almost sold out.

If you like our fishing report, please consider buying your gear from us. We generally ship the same day, for free anywhere in the country on all but the smallest orders. Our shop can only exist with your patronage.
Midges sz 22-32 (typically afternoons, but can start earlier). The Winter Caddis hatch best after cool to cold nights, mild nights actually make for light hatches of them. Stones usually hatch better on mild days. Nymphing remains the most consistent producer of trout, but streamers are catching too at moments (just remember to fish them slow & deep first, and if that doesn't work, strip them in faster, but make sure to get them down in the water column).
Posted by UpCountry Sportfishing at 8:59 AM