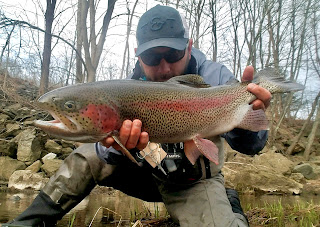 Many of you picked up on our "Farmington River Steelhead" April Fool's joke yesterday on our Facebook & Instagram pages.

Here's the real back story on that fish. I bumped into Zach after work Saturday, and he said he thought he stung & lost a big trout. He went back to the same spot, Easter morning, and hooked & landed the big rainbow you see pictured. It taped out at 24" even, making it as big as many Great Lakes Steelhead. Guess he won the Farmington River Easter Egg Hunt haha.

Back to our "In Season" hours starting today, Monday 4/2: 8am-6pm Monday through Friday, and 6am-5pm on weekends.

Weekend fishing reports varied, but we had quite a few good ones. Some trout have been poking their noses up in Church Pool for things like Winter Caddis & Midges, and we've seen some Stoneflies and a few Blue Winged Olives too. The best reports are coming from the nymphers, both in terms of numbers and fish size. Tip: Quasimodo Pheasant Tails in #14-20 will imitate quite a few of the nymphs drifting by the trout every day.  Quite a few quality, above average trout getting both landed & lost.Water temps have been rising into the mid 40s in the afternoons. This will raise get both the trout and bugs more active. It will improve the nymphing, as well as the dry fly action.

Anglers are catching a mix of recent stockers, and medium to large holdovers & some very nice wilds. If you want quality fish and are willing to work for them, hit the permanent TMA/Catch & Release (C&R). If you want easier fishing and better numbers, hit the stocked sections mentioned in the paragraph below. Remember that recently stocked trout often pod up, so move around the pools until you locate them. Most trout are still holding in moderate speed water- they want some current, but generally not a lot in cold water. The exception to this is warm afternoons with good bug activity- this will often suck fish up into medium to medium-fast speed riffles & runs to feed subsurface on nymphs/larva/pupa.

The river has been heavily stocked over the past month (except the permanent C&R, which currently has plenty of sizeable holdovers & wilds) from Goodwin/Hogback Dam down to Rt 177 in Unionville/Farmington, and is open to catch & release fishing.

CT Trout Stamp:
The new $5 Trout Stamp is now available for purchase at our store and now necessary if you are fishing the Farmington River (even if you catch & release), and on most other streams/lakes/ponds that have trout all across the state. The last budget cut $200,000 from the hatcheries, so this is some much-needed funding that is expected to generate about $300,000 for the DEEP fisheries.

Flows:
9am 4/2 Flow Update:
MDC is reducing release from the dam by 31cfs. 220cfs in Riverton, 410cfs total in the permanent Catch & Release section in Barkhamsted. The upper 2 miles in Riverton (below the dam) are currently medium and below typical early April levels. The permanent C&R is clear and in nice shape, with a medium flow, very nice conditions.

Currently hatching are Winter Caddis (mornings, especially after cold nights), Midges (afternoons), Tiny Winter (Capnia) & Early Black Stoneflies (afternoons), and we are starting to seeing some #18-22 Baetis Tricauditus (Blue Winged Olives). When fishing this time of year, pick your spot carefully if the water is up, and remember that water temps are still on the cold side, which effects where the fish hold & lay. Trout will seek out refuge from the current, especially in cold water. Typically this means they move closer to the bank, out of the heavier flows. Look for wider pools, and also spots where the river goes from narrow to wider (it make current breaks on both sides of the main flow). Inside turns provide nice soft water for the trout to hold in, and are relatively easy to fish and figure out where the trout are. Streamers are very good for targeting better fish when the water is up, and nymphs are also an excellent choice. Don't be afraid to fish "Junk Flies"- Mops, San Juan/Squirmy Worms, Green Weenies, Eggs/Eggstasy flies, Cased Caddis, big Stoneflies, etc.

Hatches:
We are seeing more & more Stoneflies, especially the Early Black (#14-16), and still some Tiny Winter Black (Capnia, #18-24). Midges are hatching, mostly dark colored (black/gray)- if you are fishing Midges subsurface use flies in the #16-22 range (red, black, olive, brown), on top more like #22-28 (gray to black). They normally pop during the mildest part of the day, typically in the afternoons, but will sometimes start in mid/late morning when it's mild. The Winter Caddis #18-24 is normally an early to late morning deal, frequently providing some surface activity. We have started seeing some early season Baetis (Blue Wing Olives/BWOs) that run about a #18-22, sometimes even a #16. The nymphs are moving around, so try a #16-20 olive colored mayfly style nymph or a Pheasant Tail in the afternoons.

Simms new 2018 version of the G3 wader is 190% more breatheable (!), 30% more puncture resistant, has fleece-lined handwarmer pockets with side zips, a velcro docking station for a fly patch, and a G4-style reinforced seat/butt area. And the best part: NO price increase! They are now better than the G4 Pro Wader, but at a much lower price. We also have new redesigned versions of their Freestone, Guide & G3 vests.
Posted by UpCountry Sportfishing at 9:13 AM