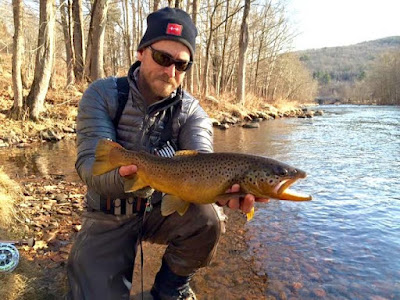 Derrick of CT Fish Guides on a busman's holiday yesterday with a fat Farmington butterbelly. The clipped adipose fin shows it to be a holdover Two Year Old Survivor Strain brown. As you can see, fish are eating well this winter, and the fishing reports from many were good to fantastic this past weekend. Getting some good reports of fish rising to Winter Caddis in the mornings, and the nymphers who know what they are doing are consistently putting up numbers regardless of whether or not trout are rising. Streamers are catching less fish, but some quality specimens. The mild weather Sunday brought out anglers like an early April day, and in fact it felt like April, with highs that pushed well over the 50 degree mark. Look for water temps to push into the upper 30's on milder afternoons, and on the warmest days you might even see it crack 40 degrees.

The Farmington remains 181cfs from the Goodwin Dam in Riverton, downstream to the confluence of the Still River, 69cfs from the Still River, giving us a total flow in the permanent Catch & Release area is 250cfs. This is a good winter level, very wadeable, and water clarity is excellent. The Winter Caddis #20-24  hatch is providing some decent dry fly fishing for a few hours in the morning. Typically the hatch is an early to mid morning deal, but that can vary depending upon the day, with winged adults often on the water after the hatch in late morning/early afternoon. On warmer afternoons we are seeing Midges #22-32 with some trout feeding on the surface in the larger pools. Our hardcore nymphing crew has been doing very well with Zebra Midges #16-20 (black, red), Green/Olive Caddis Larva #14-16, Cased Caddis #12-14, Quasimodo Pheasant Tails #14-18, small Egg Flies, Squirmy Worms, Rainbow Warriors #16-18, Hot Spot Nymphs #14-16 & Stoneflies #8-14 (brown, black, golden/yellow).

Most of our Farmington trout are in winter lies (slow to medium speed water with some depth). Skip the faster water and focus on pools, deeper pockets, moderate riffles, and deeper runs. Look for fish around current edges, drop-offs & structure; anywhere there is a break from the faster current combined with some depth. Trout are cold blooded so in the winter they don't have to eat as much and conserve energy by moving out of the faster water and holding in slow to moderate water. Having said that, when nymphing we are still hitting a lot of fish in medium speed water, especially where moderate riffles start to drop into deeper water. While you may still hit fish in knee-deep water, spots with 3-5 feet of depth seem to be holding the lion's share. Trout will often pod up this time of year, so where you find one, there may be a bunch more. Nymph slow & deep and expect strikes to be subtle. Get your streamers well down into the water column using weight or sinking lines and don't fast strip them, but rather swing, twitch, and slow retrieve them. Winter trout like their streamers slow, deep & easy to catch.

Rich Strolis' new book "Catching Shadows- Tying Flies for the Toughest Fish and Strategies for Fishing Them" is now available. It covers 20 of his best original fly patterns, the rationale for developing the fly and how/when to fish it. He will be doing a book signing at UpCountry on this upcoming Sunday, February 7th, noon to 3pm.

Our apartment is now closed for the season, and will be available again starting April 1st.
Posted by UpCountry Sportfishing at 8:50 AM