Zach St. Amand's son Nolan with a grin and a nice Farmington River brown trout!  He's up from Florida, and Zach has been working on getting him dialed in, and it looks like it's working. That's what it's all about.

I ventured out yesterday, and had to work for them (I got spoiled last week!), but still managed a very good catch that any normal person would be happy about (FYI I'm definitely not normal...). Best fishing for me was in early afternoon. Midges were hatching, and the trout got active for 2-3 hours, I did best on #18 beadhead Midges, but picked up fish on Pheasant Tails, Hot Spot Nymphs & Mops also. Trout are podded up, so often where you find one or two, there are a bunch more. Once the bugs got active, the fish spread out a bit and were actively feeding, When the bugs stopped, so did the good fishing. 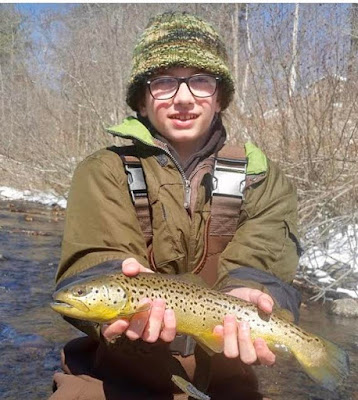 March came in like a lamb, as did Spring, then it got a little lionish, and now it looks like March will also go out like a lamb, with Long Range highs running in the 50. Look for highs in the 40s through this weekend and warmer next week. Total flow through the C&R area in Barkhamsted is a nice and easily wadable 225cfs.

Best fishing lately by far is still in the areas that were recently stocked, especially upriver from Whittemore Pool to the dam in Riverton. . The permanent C&R section (6+ miles, from the bridge abutment above the Campground down to Rt 219) has plenty of holdover & some wild trout in it already if you are looking for quality over quantity. The freshly stocked areas are fishing better than the permanent C&R, and the fresh stocked trout in those areas are making the holdover and wild trout bite better due to competition.

We have been receiving mass quantities of various products literally every day, we are unpacking 2 big boxes of fly tying materials that arrived Thursday from Wapsi, and a big Hareline order arrived earlier in the week.

With normal flows here lately, some larger sized nymphs (#14-16) are working, along with the smaller #18-20 Midge Pupa/Larva & Pheasant Tails that have been so effective the past month. Even some good reports on big #8 Mop flies lately too, especially on the recent stockers. Bigger Stones #8-12 are pulling less but bigger fish. If you are looking for rising trout, target the soft water in the big wide pools (generally Caddis in AM, and Midges & Stones in afternoons, but that is a very general rule and varies from day to day).

Winter & Early Stones are all hatching, especially on milder/sunny days- Tiny Winter Black Stone #18-24, Early Black Stonefly #14-16, and Early Brown Stonefly #14-16. Trout do rise to the Stoneflies when conditions are favorable and we have some great flies here tied by our own Don Butler & Bruce Marino to imitate them, however, the nymph imitations are more consistent producers. Bruce has a new Early Black Stonefly nymph pattern out that we just put in the fly bins. that has been working well. For Midge larva & pupa nymphed deep, think black, olive, red, or yellow (yellow doubles as an imitation of certain small Caddis larva too).