It was a busy weekend, especially Saturday with the warm weather and no rain. Might have been the first day I didn't hear a single fisherman complain, it sounded like almsot everybody had a good to excellent day. Conditions have all lined up, with medium/normal flows, pleasant weather, lots of assorted bugs, rising trout at moments, and lots of hungry trout- some big. Just what every fisherman dreams of. Sulfurs, Vitreus, various assorted Caddis, March Browns are all in the mix. Just starting to get a few reports of big Isonychia (Iso's) downstream in Canton/Collinsville/Unionville, not up into the permanent TMA/Catch & Release (C&R) yet, but probably soon. Nymphs and wet/soft-hackles/wets continue to be the most consistent producers of fish, especially bigger ones, but a lot of fish are rising when bugs are hatching now, due to the finally normal water levels and mild weather. Streamers are still good, especially in low light (early & late in the day)- we have a bunch of cool new streamers in the bins, ask and we will show you.

Multiple hatches are now occuring throughout the permanent TMA/Catch & Release (C&R). Caddis typically hatch in the afternoon and egg-lay at dusk, most of the various mayflies are hatching more toward the evenings. Hot weather can push the evening activity closer to dusk/dark, and conversely cool/cloudy days can make it happen earlier. Nymphing with Caddis pupa  (and Larva) is very effective from about mid morning through late afternoon. Mayfly nymphs are at their best from mid/late afternoons through evenings. Non of these hatch times are set in stone, so be sure to be observant & experiment. Streamers tend to be most effective during low light (early & late in the day), and on overcast or rainy days, and also in higher, off-color water. If you fish them on a bright sunny day, look for structure (downed trees, big rocks, undercut banks, overhanging bushes) in the shade. Wet flies & soft-hackles can be effective any time of day, but especially when the nymphs, pupa & egg-laying bugs are active/hatching.

We got in a veritable pile of flies from Fulling Mill recently, and we have a ton of streamers in the bins now, plus some cool new nymphs and lots of Frenchy Pheasant Tails. Got some cool patterns in this order from the Fly Fish Food guys, such as the Complex Twist Bugger, Ice Caddis pupa, and Masked Maurauder in a golden stonefly version, George Daniel's Sculp Snack streamer, Tim Flagler's Euro Golden Stone (good anchor fly), Joe Goodspeed's Juvenile Crayfish, and many other deadly new patterns.

Now is a great time to experiment with fishing a pair (or even better yet a trio) of soft-hackles/wet flies, it is both fun & very effective. It's an efficient and pleasant way to cover a lot of water, and you can hit those thin water lies near the banks that are hard to nymph- big browns often hold in water like that, especially during hatches & low light. It's also deadly during a hatch, as a lot of the bugs get
eaten by trout just under the surface, and that is where you are presenting these flies. The people fishing soft-hackles & wet flies are giving me some excellent reports, try soft hackles with Hare's Ear bodies, as well as Partridge & Yellow/Green/Orange these flies will cover your Caddis, Vitreus & Sulfurs. I recommend fishing 2-3 at a time, on tag end droppers, spaced about 20-30" apart. If tangles are a big problem, go to 1 fly only, but be aware 2-3 at a time are more effective and allow you to animate the flies in ways that you cannot do with a single fly (eg. "dancing the top dropper").

Vitreus #14-16 & Sulfurs #16 are both at least as far up as Pipeline/Lyman Rock. Assorted Caddis #14-18 are heavy throughout the TMA/C&R, below it, and up into Riverton.  March Browns #10-12 are now also all the way up to about the Still River. Sulfurs are typically an evening hatch so don't leave early! Vitreus are typically evenings also. If it's cool & cloudy they can start in early/mid afternoon, but on hot sunny days they will hatch later in the evening. Caddis typically hatch in the afternoons and egg-lay in the evenings, and March Browns sporadically hatch from late afternoon through evening.

If you are nymphing, think about fishing a #14-16 olive/green to tan Caddis Pupa or Larva, #14-16 Mayfly type nymphs (can be a Pheasant Tail, Hare's Ear, Frenchy, Sulfur Nymph, etc.), or something 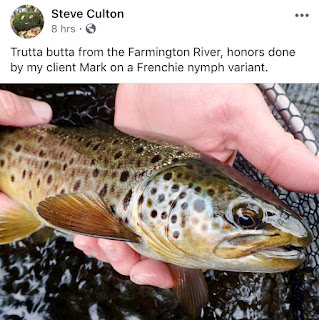 smaller & olive in the #16-20 range to imitate the Baetis/Olives (especially think Olives on cloudy days). The Pheasant Tail is a very effective imitation of Olives and many other mayflies. Also #10-12 Fox Squirrel Nymphs & big Hare's Ears do a great job imitating March Brown/Gray Fox nymphs, they get very active subsurface starting 1-2 week before they hatch, they migrate from faster water into the shallower stream edges. If you are targetting the semi-recent stockers, I'd try pairing a natural looking nymph with a Junk Fly like a Mop or Squirmy Worm, or maybe a flashy/gaudy hotspot nymph- deadly combo!

The Two Year Old Survivor Strain browns the state stocked in the Permanent TMA/Catch & Release (C&R) this spring are extra big, quite obese with a good number in the 18" plus range and some even bigger in the 20-21" range. They are putting smiles on a lot of angler's faces . Some big holdovers & wild fish are mixing in with the stockers.

Wanna catch trout? Obey the following  4 rules, laid out years ago by Jack Gartside:
-Rule #1 is find the fish and fish where they are
-Rule #2 is don't spook them!  (FYI big wild trout spook easily)
-Rule #3 is fish something they want to eat
-Rule #4 is present it in such a way they they will eat it (dry fly guys take note: this may mean you
have to fish subsurface!)
I would add Rule #5 fish when the fish are feeding, with hatches being prime-time, especially when they intersect with low-light periods (big browns love to feed in low light). Fishing subsurface a couple hours before a hatch with the matching nymphs/pupa can also be deadly.

Flow as of Monday morning 6/17/19:
Currently the total flow in permanent TMA/Catch & Release per the USGS gauge this morning is normal & medium at 365cfs (the Still River is 86cfs), and in Riverton the in the 2 miles above the Still River the Farmington is medium at 279cfs. USGS average historical total flow for today is 329cfs. The Still River joins the Farmington River about 1/4 mile below Riverton Rt 20 bridge, roughly 2 miles below the dam. East Branch release was 0cfs late I knew, it joins the West Branch about 3/8 mile below UpCountry near condos & sewage plant. The Still River drops every day we don't get significant rain.

Water Temps:
Look for water temps to average in the upper 50s in the permanent TMA/Catch & Release (upper 40s/low 50s in Riverton above the Still River), but will vary depending upon the weather, time of day, and specific location. Downriver in Collinsville/Unionville will rbe slightly warmer, probably upper 50s/low 60s. Long range highs average 70s/low 80s, with lows upper 50s/low 60s. Warmer, sunny days will see the biggest water temp increases. The exception to this will be during high water releases from the dam, as the colder water from deep in the reservoir chills down the river. Highest water temps will occur in mid/late afternoon, with sunny days seeing the biggest temperature increases. Typically the best bug activity (and fishing) correlates to the most pleasant time of the day for us humans.

-Report by Torrey Collins
Posted by UpCountry Sportfishing at 10:23 AM