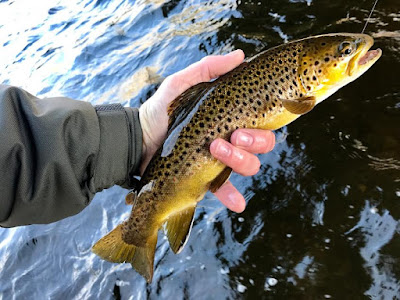 One of a good number of pretty trout yesterday. My nephew Tom & I headed out Thursday and braved the cold. We found a river devoid of anglers, with some willing trout in it. It was a slow start without many bugs in evidence, but as we got into the afternoon and the water temps bumped up slightly, the trout started feeding on nymphs and we had an easy double-digit afternoon. No monsters, but some pretty fish & plenty of action for a while. You will often find that in winter, when you are fishing subsurface, there will be a period where for no apparent reason, the trout turn on for an hour or two and actively feed. I find it often happens in mid/late afternoon, problem a combination of higher water temps intersecting with lower light. Total flow in the permanent Catch & Release/C&R/TMA this morning is a moderate 190cfs (64cfs from the dam in Riverton, plus 126cfs from the Still). Pat Torrey has a couple of fly tying classes in February, "Tying Flies That Trigger Trout", and "Tying the Wet Fly & Soft-Hackle"- see Events/Classes page for info, call store to sign up if you are interested.

Fishing remains good for many anglers- be flexible in your approach, and move if you aren't catching fish or the fishing slows down. Don't be a one-spot angler if you aren't catching, move and keep showing your flies to new fish and your catch rates will improve. Morning Winter Caddis hatches have varied, with some mornings seeing heavy hatching & rising trout, and other mornings having minimal hatching. We've also been seeing Midges many afternoons. Regardless of whether you find risers, nymphing is consistently productive if you know how to do it, and slowly/deeply fished streamers are also picking up fish (sometimes bigger trout). FYI the water from the dam runs slightly warmer in the winter (and colder in the summer), and so normally does not to freeze or slush-up in the upper 2 miles or so, even during really cold snaps. Often, especially on sunny days, if there is morning slush in the permanent Catch & Release are, it clears out by lunchtime.

Right now hatches are: Winter Caddis sz 18-24 in the mornings (sometimes going into the afternoon), and Midges sz 24-32 in the afternoons. Ideally look for days that are not windy if you want to target rising trout. Water temps will typically be in the 30's, depending upon weather, time of day, and distance from dam- it can crack into the lower 40's during warm/sunny spells. This means trout have mostly dropped out of faster water and moved into their deeper, slow to moderate current winter lies. Colder water leads to a slower trout metabolism, which means they don't need to eat as much. They look to conserve energy by holding in water with less current, that also has some depth (for security). However, they will often move into moderate riffles at the pool heads to feed on nymphs/pupa/larva when sunshine raises the water temps at midday, which both increases their metabolism and gets the bugs more active.

FYI the new book "Nymphing The New Way: French leader fishing for trout" is now in stock at UpCountry, and it looks really good. Update: temporarily sold out, but give us your name & phone # and we will call you when it's back in stock (early January 2017).

The MDC did their fall trout stocking in early November. This batch was stocked in the upper river from the Goodwin/Hogback Dam in Riverton downstream to Whittemore Pool.

UpCountry acquired a ton of Simms closeouts that are on sale. There is still a large selection of Men's & Women's: Gore-tex jackets, packs, slings, shirts, pants, tee shirts, and a few shoes/wading boots/waders. Sizes are limited (the Men's is mostly in Large, and the Women's is all in Medium) and there are only a couple of each item so when they are gone they are gone.

If you like our fishing report, please consider buying your gear from us. We generally ship the same day, for free anywhere in the country on all but the smallest orders. Our shop can only exist with your patronage.
. Simms Tee Shirts size large are buy one get one free. We have a limited selection of Simms & Umpqua Packs and Vests 40% off.  In addition to these items, UpCountry will price match just about any sale or deal you can find on the internet.... we appreciate your business and recognize that sometimes a deal will pop up online that you can't resist.... just bring it to our attention.
Posted by UpCountry Sportfishing at 8:56 AM