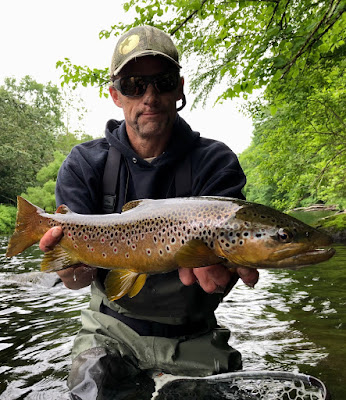 Some beautiful browns were landed Monday. Up top is customer John Holt with a flawless wild male brown of about 21” on a streamer- check out the hook jaw, awesome color, and flawless fins. Next down is Zach’s client Rick with another great brown. Mr Consistent! Third pic is Chris Chase with really nice holdover brown. Fourth down is a flawless wild brown laid on Cody Varza’s net.

We have some availability for our awesome upstairs apartment rental- go to our Lodging page to check if it’s available. Great place to stay riverside, completely furnished with a kitchen,big flat screen TV,and a deck that gives you a view of the river out back. All that and very reasonably priced. 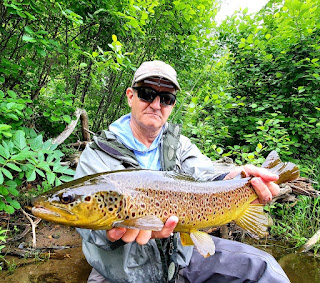 I went out every night from Thursday through Sunday, and had decent to excellent action every night. Bug activity ranged from light to moderately heavy, I fished different locations each night. Saw more Sulfurs (mostly #16, but some #14 and #18) than anything, but plenty of Attenuata, big March Browns, Vitreus, a few Isonychia, and all sorts of Caddis. At dusk there were egg-laying Caddis & spinners (March Brown, Sulfur). I was able to avoid the crowds (lots of anglers out!) but still have good fishing, with a mix of stocked rainbows, browns & brook trout, along with various sized wild browns. I stayed mostly out of the permanent TMA/Catch & Release. I was nymphing, but I saw some BIG trout rising here and there. I may have to dust off my dry fly rod…. 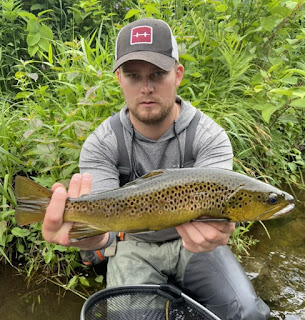 Sulfurs remain the #1 hatch, but there are other bugs too. Heavy localized rain Monday morning didn’t affect the flow much at all, especially since the MDC cut the dam release back by 45cfs yesterday. We are still low 400cfs range & slowly dropping. “Normal” for today would be about 350cfs, so we are close to that. Most anglers looking for rising fish are finding them in the afternoons & eves. Remember that a lot of the bug activity is going to take place where there is more current & choppy water. This is where many nymphs/pupa hatch into duns/adults, and also where Mayfly spinners & Caddis adults do all their egg-laying. The guy 100-200 yards down the pool in the flat water sometimes has minimal action, while the fisherman near the riffle at the head of the pool has lots of bugs & rising trout. Blue Winged Olives like to emerge on cloudy, cooler days like today, and in the slow to moderate water. Whereas other bugs like March Browns/Gray Fox & most Caddis hatch and egg-lay in faster, broken/riffly water. It pay to know your bugs, their habitat, and their hatching behavior. Sulfurs like medium-slow to medium-fast water.

Attenuata have joined the fray recently, they often get mistaken by anglers for a small Sulfur- but they are NOT. Size is #18-20, and the winged dun pops out of the nymphal shuck on the stream bottom, and then rises/swims to the surface (like the Quill Gordons & Vitreus). The color upon first emerging is a bright greenish yellow, sort of an apple green- and yes, we have the matching dun pattern that Don Butler ties for us. I’ve been seeing them pop in the gentle riffles in New Hartford around 7pm’ish, about the same time I’m seeing the #16 Invaria Sulfurs. We’re also seeing an afternoon hatch of the Sulfurs in the afternoons sometime between 1pm and 5pm in the middle to upper river. Still some evening Vitreus averaging #14 in the mid to upper river too, they tend to emerge in faster water/riffles, that hatch is getting near the end. And at dusk #16 Sulfur spinners & #10-14 March Brown/Gray Fox spinners. Both will fall over the riffles and drift down into the pools, helpless & spent on the water. The March Browns in particular will often fall over heavier pocket water. They typically sporadically emerge in faster water, along the edges, from late afternoon through eves. 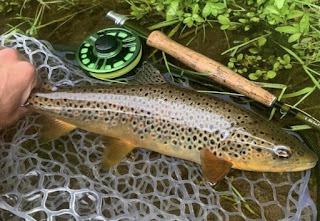 Various assorted Caddis (#12-22, averaging #14-18) remain a staple bug, with the pupa consistently producing subsurface- the adults come back in the evenings to egg-lay in faster water. Tans & olive/green are common colors, but also gray, brown & black. Keep your eyes out for spinner falls of Sulfurs & March Browns in the eves,this can bring some large trout to the surface. Caddis are a possibility at any time. They tend to hatch here in the mornings/afternoons in riffles & faster water, and then come back at dusk and egg-lay/dive in the riffles & faster water. A Caddis pupa is a great choice for nymphing any time of day, but especially during emerge, and even during egg-laying, just be sure to let them swing out a the end of each drift. Large Stoneflies averaging #6-10 are starting to emerge/crawl out in the early to mid mornings now- you will see their empty shucks on the rocks in the fast water. That is also the water type you want to focus on when nymphing imitations of them in the mornings-this can produce some BIG fish. Pair them up with a Caddis Pupa or a smaller Pheasant Tail/Frenchy/Mayfly nymph.

Weather has cooled down and is back to normal. On some of the hotter, humid sunny days we saw Flying Ants on the water- normally that’s an August/September deal. Terrestrials such as regularAnts & Beetles are both good options this time of year during non-hatch times as the milder weather has them active. If it ain’t happening on the surface, the nymph fishing underneath has been good. Imitations of all the bugs mentioned above are good choices. And if you are out in early to mid morning, try a big Stonefly nymph #6-10, as they are active and hatching/crawling out on the rocks now.

Flow:
The Farmington is running upper end medium at a total flow of 413cfs this morning in the permanent TMA/Catch & Release (C&R). It was reduced to 310cfs below the dam in Riverton, and the Still River is adding in 103cfs and dropping – it dumps in a little below the Rt 20 bridge in Riverton. The Still River currently runs warmer (60s) than the water from the dam (upper 40s) this time of year, and so right now it has a positive affect on water temps (raises them well into the optimum range in the 50s). The East Branch is releasing no water as of today- it comes in about 3/8 of a mile below UpCountry. Unionville USGS gauge is 508cfs & dropping this morning- that’s a medium flow for that section this time of year. Riverton water temp was 49 degrees at 8am, Sunday afternoon it reached 51 degrees at the Riverton gauge (water temps are higher downriver, and can reach mid/upper 50s currently, low 60s in Collinsville/Unionville during hot sunny afternoons).

Posted by UpCountry Sportfishing at 10:32 AM