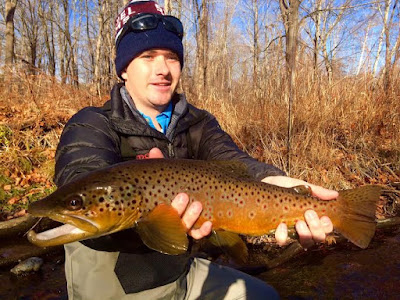 The unusually nice weather is bringing fishermen out, and this month we are also starting to see more big fish being caught. Witness this beautiful 20" plus brown caught by Derrick's (CT Fish Guides) client Jed Drake on a nymph- he's done 2 guided trips with Derrick, and this is the 2nd trip in a row he landed 20" class fish (and he landed other big fish on this same outing). This one looks wild to me, absolutely perfect fins, and no adipose clip or dye mark behind the eyes. Farmington Gold. Flow is a medium-low 218cfs total in the permanent Catch & Release area (181cfs from the dam in Riverton).  Normally (AM hatch of Winter Caddis excepted) you want to focus on the late morning through mid-afternoon period from now through March, but with these above average air & water temps, the fishing lately has generally been better in the mornings (even subsurface), with afternoons being slower. Interesting. Good fishing reports from many anglers this past week (but not all), with fish coming to nymphs, streamers & dries. Quite a few 16-18" fish reported by anglers, with some up to 20+ inches. Experienced nymphers are catching the most & biggest (no surprise there), however dries & streamers have both been effective at moments. Change spots and/or techniques if you are not catching trout, experimentation is key to success right now. Mild weather combined with nice flows has been driving some above average December fishing by warming the cold water up and speeding up the trouts' metabolisms. Water temps vary depending upon distance from dam, sunshine, daily high, and daily low- they've been averaging in the mid 40's. Normally water temps would be in the 30's in an average December. Trout haven't set up in the slow water winter lies yet, they are anywhere from medium-slow pool water to riffles, to softer/deeper pockets. Eventually when temps go inot the 30's (probably not until January!), you will see most trout migrate into the slower/deeper pool water. Most browns are post-spawn right now and as such are feeding, but moving around too, so cover lots of water if you can.

Our apartment is now closed for the season, and will be available again starting in April 1 2016.
Posted by UpCountry Sportfishing at 9:21 AM