Monday 12/9/19 Farmington River Report: Is it Winter or Spring?? 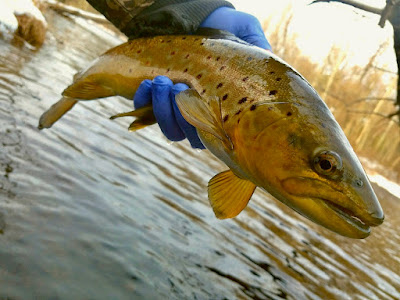 From Winter snow & cold, to April weather with highs in the low/mid 50s and rain. Make up your mind Mother Nature! Trout are still getting caught no matter what the weather is on any given day. You will see a flow bump from the rain today/tonight combined with snowmelt. Can always go up to Riverton above the Still River for lower flows if the levels rise above what you like, upper 2 miles below the dam usually sees minimal changes in water levels due to the steady dam release. Current hatches are Winter/Summer Caddis in the early/mid mornings, and Midges in the afternoons. Subsurface with various nymphs has been the most consistent, and streamers are pulling less but sometimes bigger fish.

Check out the beautiful wild brown Zach nailed Sunday after his guide trip. Not too many people ventured out Saturday, but the somewhat warmer temps & less wind had a few anglers out Sunday and fish were caught, albeit you had to work a bit for them.

Subsurface is the most consistent, just make sure to fish slow & deep, target the softer/moderate water, and expect strikes to be subtle/gentle. For dries it's mostly either Winter Caddis in early/mid mornings (the big exception to fishiing late morning to late afternoon this time of year), or Midges in the afternoons. Blue Wing Olives are pretty much done, they were light this fall. Nymphwise, Midges, egg flies, small Mayfly nymphs, big Stoneflies, and Caddis Larva have all had their moments. Junk Flies like eggs/Mops/worms have been good in the mornings, and more imitative bugs like Midges, Stones, and Mayflies have generally been better in the afternoons- makes sense because as the water temps rise the bugs get more active. Streamers are another good choice in the mornings before the bugs get moving, and also great again at the day's end when light levels drop and the bigger brown trout come out to play. 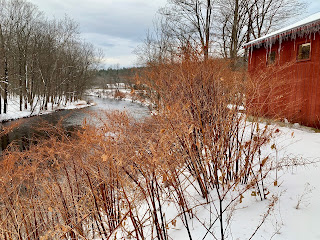 Generally afternoons have provided the better fishing lately (higher water temps = more active trout & bugs). The most consistent action for bigger fish has been subsurface with nymphs & streamers. Makes sense, as that's when most of the real insects are active. With streamers, experiment with colors & retrieves, and make sure to get them deep. Colder water normally means slower retrieves/swinging presentations will generally outfish a faster strip when it comes to streamers- but there will still be occasional moments the trout want a faster strip, so make sure to experiment.

Less hatches this time of year and dropping water temps means the trout won't normally be in the faster water, so start targeting deeper runs, pools, and softer/deeper riffles. Trout may move into the heads of runs/pools/riffles as water temps rise in the afternoon, so keep that in mind. In the mid afternoons look for rising trout in the softer pool water where the riffles slow down and below that- same in early/mid AM when the Winter/Summer Caddis are popping.

Junk Flies (Eggs, Mops, Squirmies) are still top producers almost anytime of day, especially when nothing is going on (they are independent of hatching insects). Midges #22-28 have been the main afternoon hatch. Before & during the afternoon hatches, the nymphs/pupa that imitate them can be very effective- usually something in #18-22 will get the job done, even though the adults can be quite a bit smaller than that. The entire river from Riverton to Unionville continues to fish well, so don't limit yourself to just one section or pool, it's literally all good.

Flows:
Total 8am flow today (Monday) in the permanent Catch & Release is medium and normal at 343cfs (243cfs from the dam, and 100cfs from the Still River)- however Still River is rising due to rain/snowmelt.  8am water temp in Riverton was 39 degrees. Lowest water temps will be at first light, highest will be mid/late afternoon. Currently trout are most active when water temps are at their highest and/or moving upward, the early to mid morning period has typically been slow, fishing picks up as the day progresses and water temps rise. Afternoon water temps usually increase anywhere from one to several degrees, and sometimes all it takes is a 1 degree increase to get the trout feeding.