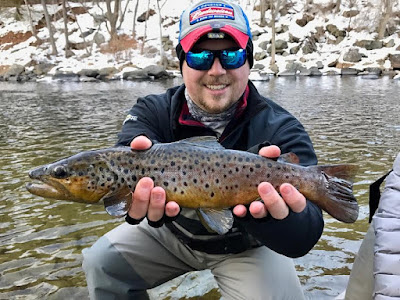 With highs pushing 40s-60s for the 15 Day Forecast, it may technically be Winter, but it seems more like early Spring. Pictured is a nice brown caught nymphing Saturday by a client of Derrick Kirkpatrick of CT Fish Guides. Total flow is currently a medium 266cfs through the permanent Catch & Release in Pleasant Valley/New Hartford (72cfs at USGS Riverton gauge, plus 194cfs from the Still River)- snowmelt Sunday finally put a normal amount of water back in the Still River, so the flow is close to normal from there down, but still low in the upper two miles immediately below the dam.

Wow, were we busy this past mild weekend, the thermometer almost hit 60 degrees on Sunday, and there were lots of anglers out and about! The much warmer temps had the Tiny Winter Black (Capnia) Stoneflies active Sunday, although the trout didn't seem too excited about them. We still have a good amount of snow on the ground as of Monday morning, but it looks like it should be mostly melted later this week, with highs in the low/mid 60s on this Thursday & Friday. Remember that snowmelt on warm/sunny days can actually lower the water temps in the afternoons, so until the snow is gone, take that into account when planning out your fishing strategy. Two things you can do: 1) start early, before snowmelt drops the temps, and/or 2) go upriver above the Still River and focus on the 2 miles between there and the dam- the water coming out of the dam is fairly stable in regards to the temperature, from the Still River and below colder water dumps in when there is snowmelt. The better reports this weekend, especially Sunday, were mostly in the mornings when water temps were slightly higher. Normally it's the opposite in the winter, with mid/late afternoons seeing the highest water temps. As has been the case the past few weeks, Midge Larva/Pupa in sz 18-20 fished deep seemed to be the best fish catchers (try black, red, or olive). By the weekend, the snow should be mostly gone and you won't have to take runoff melt into account, and then afternoons should be good all over the river. Despite "the experts" saying the best fishing in the winter is 11am-3pm, I often do best from mid-afternoon until dark, when water temps are normally highest (except during snowmelt).

Expect water temps mostly in the 30's, but later this week when the snow is gone, it could easily get into the low/mid 40s on warm/sunny afternoons, which could fire up both the trout and insects. Hatches include Winter Caddis sz 18-24 (mornings primarily, but sometimes into the afternoon), Midges sz 22-32 (typically afternoons, but can start earlier), and Tiny Winter Black Stoneflies (Capnia) sz 18-24 (afternoons). We may start seeing the somewhat bigger Early Black & Early Brown Stones, they average #14-16 on the Farmington. They've been all over sticks we've pulled off the bottom when nymphing lately. Hatching activity has ranged from light to pretty good, depending upon the day and location. The Winter Caddis hatch best after cool to cold nights, mild nights actually make for light hatches of them. Stones usually hatch better on mild days. Nymphing remains the most consistent producer of trout, but streamers are catching too at moments (just remember to fish them slow & deep first, and if that doesn't work, strip them in faster, but make sure to get them down in the water column).


The new book "Nymphing The New Way: French leader fishing for trout" is back in stock again- it focuses on Euro-style nymphing using very long leaders, which is deadly indeed. The first batch sold out in a week or two. Keep your eye out for "Nymph Masters" by Jason Randall coming out in March/April (they keep changing the release date), and this batch is now almost sold out.

If you like our fishing report, please consider buying your gear from us. We generally ship the same day, for free anywhere in the country on all but the smallest orders. Our shop can only exist with your patronage.
Posted by UpCountry Sportfishing at 9:06 AM