Well we fooled some of you yesterday with our April Fool's giant Farmington River rainbow, but most of you knew it was a joke. Our apologies to anyone who thought we were honestly trying to pass this off as legit, we try to keep our reports accurate & truthful. Pictured in place of the big rainbow (FYI it was caught in the New Zeland hydro canals where they get Bows & Browns over 30# and sometimes over 40#) is a more typical Farmington Rainbow that was caught by Zach on April Fool's Day. Flows are medium and have dropped almost 150cfs since Monday morning, see below for more detailed info.  FYI we go to our extended summer hours starting 4/1. Also, from 4/1 until 4/13 at 6am (Opening Day), the roughly one mile section in Riverton from where Hogback Rd joins Rt 20 (Canal Pool) downstream to the gas pipe at the head of Pipeline Pool is closed to fishing- this is the section they do the fishing derby for the kids on Opening Day. Beaver Pool remains OPEN to fishing.

Flows bumped up a bit over the weekend due to rain, but are now dropping and we are currently medium in Riverton at just under 200cfs in the first 2 miles below the dam (FYI part of that section is temporarily closed to fishing until 4/13), and below the Still River the total flows has dropped to a medium flow in the mid 400cfs range and steadily dropping (632cfs is historical median flow for today). Reports mostly remain the same: low numbers, but bigger than average fish. Early Stoneflies #14-16 and Baetis/Blue Wing Olives #18-20 are popping in the afternoons. You may see some risers, but expect to go subsurface if not. Most of the big trout you've been seeing posted on here were caught on nymphs or streamers. Slow & deep is the name of the game when fishing subsurface, ya gotta make it easy for the trout to eat. Even though water temps
are creeping upward, they are still cool and the trout's metabolism isn't high yet, so you need to spoon feed them with flies right in their face. Other than streamers, expect the takes to be subtle.

FYI starting Monday April 1st, we go to 8am-6pm on weekdays, and 6am-5pm on weekends.

Fishing remains similar: you are working hard for your holdover and wild fish in the permanent TMA/Catch & Release, but 16-18" seems to be the most common size, with an occasional one in the 20" plus range. Half day efforts are typically 0-3 fish caught for most anglers, but as you can see they are BIG. Quality over quantity. In the sections that were stocked in early March (Whittmore to the dam, and 219 bridge to Rt 177 bridge in Unionville), you have a better shot at numbers, with 12-14" being a more typical size. Water temps were averaging in the low/mid 40s and will vary depending upon the weather, time of day, and section of river. Slightly cooler weather now may drop it to more like upper 30s/low 40s. Sunny days will see the biggest water temp increases. 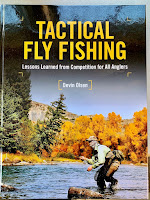 batch is arriving this week. Covers Euro style nymphing, plus a whole lot more. Based upon what he's learned from years of the highest level fly fishing competitions against the best trout fly fishermen in the world. It covers things in an extremely detailed way, and has some great "Case Studies" where he shows you different water type pictures with photo sequences of how they were able to successfully catch fish in them, and what adjustments they had to make in their rigging, approach, presentation & flies to find success. It's a good new option that does NOT duplicate George Daniel's two books on nymphing, but rather it compliments them.

Streamers have picked up less but bigger fish lately. If you wanna throw 4-6" streamers for trophies, you are swinging for the fence and may strike
out, but some days you will hit a home run and catch a giant. Be patient, and cover lots of water. Some anglers are finding fish rising to Winter Caddis, Midges, and occasionally Stoneflies. Look to slower water for dry fly fishing, but be prepared to go subsurface if needed. Sometime they will
eat the Black Stones on the surface, but it's very hit or miss. Junk Flies and various streamers fished slow & deep are also the ticket sometimes. Experiment and the trout will tell you what they want. It can vary from day to day, and even during the same day as water temps, trout metabolism, insect activity, and light levels all change as the day progresses.

While I still recommend focusing on the moderate speed water with some depth in March, this is just a starting point. Some of the better are moving into the faster water to feed in the afternoons. As

water temps rise in the afternoon most days, trout often get more active and feed, and may move more into the current if there are bugs in the drift. When trout are less active due to cold water temps, it typically pushes them into pods in the softer water of pools, deeper runs, and gentle/deeper riffles. But they (and especially bigger fish) will often slide up into the heads of pools/riffles/runs into the somewhat faster water to actively feed. This is most common later in the day (afternoons) when water temps are highest and light levels diminish. It's a combination of rising water temps, bug activity, and light levels that gets the trout feeding.

Nymphing is the #1 producer most days, as there are lots of nymphs in the drift now, but browns are hungry and sometimes want a big bite like a streamer. Many days Church Pool has been offering up morning dry fly fishing in the slower water (some days great, and some slow)- look for mornings that are not windy, preferably following a cold night. You may also see Midges sometime between late morning and the afternoon, and also Blue Wing Olives in about a #20. Other than the Winter Caddis, I usually target the late morning to late afternoon period for the most comfortable temps & best fishing (higher water temps = more active bugs & trout). The low light and higher water temps of the last couple hours often brings bigger browns out of hiding too.

Flow update as of 9am Tuesday 4/2/19:
Total flow in permanent TMA/Catch & Release according to USGS gauge is currently medium at 456cfs and dropping (the Still River is 261cfs and dropping), and in Riverton above the Still River the Farmington is medium at 195cfs. The Still River joins the Farmington River about 1/4 mile below Riverton Rt 20 bridge, roughly 2 miles below the dam. East Branch release is 200cfs last I knew, it joins the West Branch about 3/8 mile below UpCountry near condos & sewage plant.

Hours:
We will be open 8am to 6pm Monday through Friday, and 6am-5pm on weekends.

Water Temps:
Look for water temps to average somewhere in the upper 30s to mid 40s, but will vary depending upon the weather, time of day, and specific location. Highest temps will occur in mid/late afternoon, with sunny days seeing the biggest temperature increases- this often activates both the aquatic insects & trout. After colder nights, it may be wise to wait until late morning, thereby giving water temps a chance to rise a degree or two, which will get the trout (and bugs) more active- streamer fishing can be an exception to this, as it's not hatch-related, as can nymphing with egg patterns or other "Junk Flies" like worm patterns & Mop flies, or flashy attractor-type nymphs that stimulate a reaction bite.

-Report by Torrey Collins
Posted by UpCountry Sportfishing at 9:53 AM