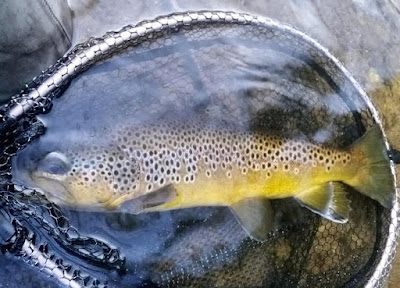 Andy Lyons provides us with yet more nice fish porn, check out this upper teens brown. He reported catching trout this week nymphing with Caddis pupa (tan, olive), Olive nymphs, and Stones. He also said there are so many Rainbow Trout everywhere that it was hard to get past them to the better browns! Fun problem to have. Flow is a medium-low 219cfs in the permanent C&R section (New Harford/Pleasant Valley), with 138cfs from the dam in Riverton, and 81cfs from the Still River. Water temps are averaging low/mid 50's (colder in Riverton near the dam). Saturday & Sunday look very nice, with a mix of sun and clouds, no rain at all.  Still some Hendricksons hatching in the colder water up near the dam, a light hatch was reported yesterday at Pipeline, your best bet is to target them above the Still River, from Hitchcock right up to the dam. However you will still see spinner falls much further downriver, as they go a good week beyond the hatch. Caddis are hatching in the the permanent C&R section now, #16-18, both olive/green bodied & tan ones. Try to catch one, as they all look tan in the air, but trout will often key on the body color and be selective, the right color can make a big difference. If you cannot grab one, then try both colors, the trout will let you know which one is correct.  This hatch can create both dry fly action, as well as excellent nymphing with pupa-type patterns. I catch some of my biggest trout every year on Caddis pupa in the fast water. Caddis  typically emerge in the AM (fish pupa), and egg-lay in the evenings (that's why you will often see them flying upstream).That's a rough rule of thumb, so be flexible in your approach. Air temps & light conditions also have a big influence on hatching activity. Caddis love low-light conditions.

Fishing remains good to excellent, and with the permanent Catch & Release section stocked with 6,000 trout 2 weeks ago (including 1,000 large Two Year Old Survivor Strain Farmington River Brown Trout), as you might imagine its been fast & furious there at moments. Many anglers are doing well lately, with quite a few landing larger trout- both recently stocked and holdovers. Move around if you aren't doing well, the trout are literally all over. Also play around with techniques, because dries, wets/soft-hackles, nymphs & streamers are all catching at moments. Don't be afraid to venture outside of the C&R section, there are plenty of trout outside of it.

The Two Year Old Farmington River Survivor Strain brown trout that the state recently stocked have a clipped adipose and a chartreuse green elastomer tag behind their left eye, and they typically average 14-18" are are unusually fat when stocked. The adults/yearlings are right eye red for 2016, and they will typically run 6-12". Some of these will hold over and become, big beautiful trout, so don't complain while you are catching 6-8" Yearling Survivor Strain browns, they are future trophies with fantastic genetics and will be extra pretty when they grow to a larger size. Weighted Woolly Buggers in colors like black, olive or white are effective on the Two Year Olds for the first 2-3 weeks, then they wise up a bit . Swinging wets & soft-hackles has been good too.

The entire river outside of the Catch & Release section has been stocked multiple times over the past 2+ months. Don't limit yourself to only the more popular sections of the river, as there is literally excellent fishing all over it, and it gets you away from the crowds. I spend a lot of time in the open water, because I like a little elbow room. And FYI, in an average year both my biggest brown & rainbow usually come from OUTSIDE the permanent C&R section. The 2 fish, 12" restriction seems to keep a lot more trout in the river, and you would be surprised at the amount of holdover and wild fish that elude the catch & kill crowd. Recently the rainbows have totally scattered throughout the entire river, even in areas where they didn't stock them, many are 14-16", with a few even bigger, including the occasional monster broodstock fish in the 6-8# plus range.