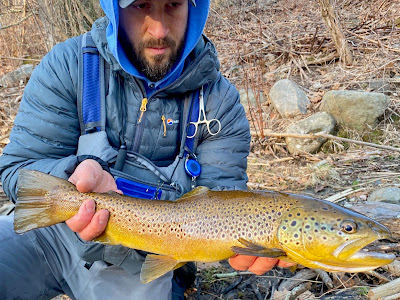 Our store hours through March: Monday through Sunday, 8am-5pm, 7 days a week. We will are now open until 6pm on weekdays (not weekends).When entering the store please try to maintain a 6ft distance from other customers if possible, and as per the governor's decree you must wear a mask/face covering of some sort inside the store. We are happy to deliver curbside if you are uncomfortable shopping inside. Just give us a call.

Farmington River Cleanup:
The annual Farmington River Cleanup on Saturday April 24 9am-3pm will be a team competition this year with awards for the most trash, strangest, biggest pile, shopping carts, and most fishing line. Everyone participating will be automatically entered into a free raffle for a T&T rod, and Simms G3 waders- click hereto sign up. 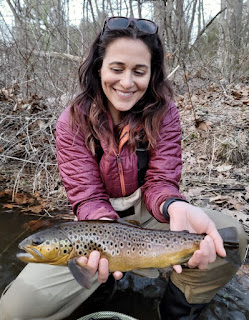 Opening Day update:
As of Thursday March 4th, Governor Lamont announced the early opening of trout fishing season to help alleviate overcrowding during COVID.What does this mean for us on the Farmington River? It’s business as usual here, as we were already open to Catch & Release (C&R) from the dam in Riverton 21 miles downstream to the Rt 177 bridge in Unionville, and that section remains C&R until the traditional Opening Day date of April 10 at 6am. All trout streams with TMAs remain Catch & Release until April 10this year, and onall trout streams that are not TMAs and fall under general regulation you are now allowed to keep a daily limit of trout.

More finned beauties for ya: top pic is Ben Canino with a BIG holdover survivor strain 2 year old brown while guided by CT Fish Guides. 2ndis Angela Ziogas with a really pretty fish that matches her jacket haha. 3rdis once again Zach, with a pretty 19” holdover brown he nymphed up just before dark.

Couple more super mild days (68-70), then back to seasonable Sunday (highs 50s-60s). Saturday looks like the day to be out this weekend with sun & clouds and a high of 70 degrees. Conditions are currently unusually good for the 2ndweek of April. Fishing has steadily been picking up, although not easy, it’s improving weekly- stocking this week should help things out in that regard. There has been limited dry fly activity, with Church Pool & Greenwoods hotspots for that. Think Early Stones & Baetis/Blue Winged Olives (BWOs). Both are an afternoon deal. Subsurface with nymphs & streamers is by far the most consistent, with some big fish coming to lucky angler’s nets. Water temps have been steadily creeping upward- Steve Hogan reported 51 degrees afternoon water temp in Unionville the other day. Riverton at the RT 20 bridge is 41 this morning, and reached 46 yesterday. Water temps are higher downriver, and reach their highest temps later in the day. With numbers like that, the Unionville/Collinsville should start seeing Hendrickson hatches downriver sometime in the next week or so. FYI it is usually a week later in the permanent TMA. 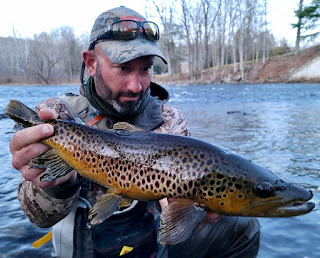 Stocking Update: This week the upper river from the dam to Whittemore was stocked, along with the lower Collinsville dam down to Rt 177 in Unionville, and also Rt 177 down to Rt 4 in Farmington. For those of you who have been struggling, it may be worth giving these sections a try. Hard to go wrong with Woolly Buggers (black, olive) & Junk Flies (Mops, Eggs, Squirmies, Green Weenies).

Lately it seems there is often an early to mid morning nymph bite, and then another in mid to late afternoon when it turns on again. This may be due to Behavioral Drift- a phenomena where a certain percentage of the nymphs & larva free drift downstream to redistribute the insect population early & late in the day during low light. It’s not technically a hatch, but to the trout it is- lots of bugs in the drift all at once, can make for some very good nymphing. Typically bugs in the drift will be stuff hatching in the near future, so think about what bugs will be going in about a month, and fish imitations of them, albeit maybe a size smaller. Things like Caddis Larva (regular and cased)& Pheasant Tails/Frenchies in appropriate sizes are good choices to imitate some of the Behavioral Drift bugs. FYI Blue Wing Olive nymphs are a super common item in behavorial drift almost all the time.

Posted by UpCountry Sportfishing at 9:12 AM