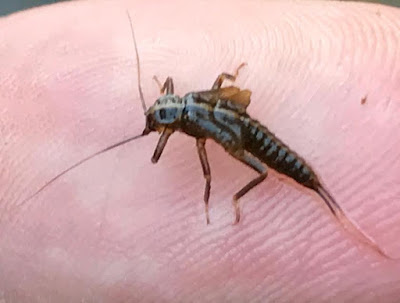 One of the many cool Farmington River bugs trout eat- here is an Early Brown Stonefly nymph I pulled off a stick that my nymph caught on this week- it was about a #16. Early Black Stones are more common to see, but the Early Browns are really neat. Looks like a winter wonderland after Thursday's snow, we received 1 foot plus of powder, with another 3-5" on the way overnight, and then a mild and sunny Saturday with a high of 42 degrees. Mostly good reports from Wednesday when it hit about 50 degrees, quite a few anglers were out and found success in the permanent Catch & Release and upriver in Riverton. I made the decision to stay way downriver away from all the other anglers, and evidently I made a bad decision, haha. It was a pleasure being outside on such a beautiful day. Total flow is currently a moderate 177cfs through the permanent Catch & Release in Pleasant Valley/New Hartford (59cfs at USGS Riverton gauge, plus 118cfs from the Still River).

Look for water temps in the 30's (mid to late afternoon water temps will be the highest, especially on sunny days). You may see slush in the mornings, and if so just head upriver to Riverton, upstream of the Still River, and it should be slush-free. Most days slush clears out by lunchtime, unless it's really cold & cloudy. Hatches still include Winter Caddis (mornings primarily, but sometimes into the afternoon), and Midges (typically afternoons, but can start earlier). Hatching activity has ranged from light to pretty good, depending upon the day and location. The Winter Caddis hatch best after cool to cold nights, mild nights actually make for light hatches of them. Nymphing remains the most consistent producer of trout, but streamers are catching too at moments.

If you like our fishing report, please consider buying your gear from us. We generally ship the same day, for free anywhere in the country on all but the smallest orders. Our shop can only exist with your patronage.
Posted by UpCountry Sportfishing at 8:47 AM