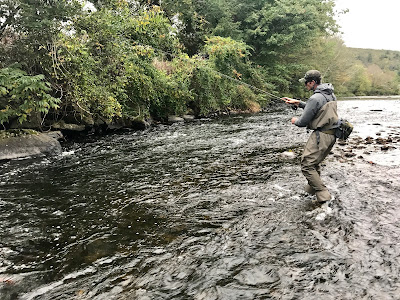 George Daniel gettin' it done on the Farmington this past Saturday. We fished together in the evening after work, he did two nymphing clinics for us this past weekend. We picked up a mix of rainbows & small wild browns. Water temp was 59 degrees. For those who don't know, George is a world-class angler who competed successfully on Flyfishing Team USA, coached the Youth USA Flyfishing Team, and authored two books (and currently finishing up a third one which he asked me to contribute several fly patterns to) and many articles. He is from Central PA and was mentored by Joe Humphrey's and George Harvey, and currently guides, writes and does clinics/seminars/presentations when he's out standing in a trout stream. We will have him back again in fall 2018 for more clinics. Great guy, superb angler, and a powerhouse of fishing knowledge.

Well fall is here and it certainly feels like it most days now. There's a little foliage color, but I'd guess the peak will be in later October starting around the 3rd week or so. River remains low & fishable, with a total flow in the permanent Catch & Release (C&R)/TMA of 75cfs (64cfs from dam in Riverton, plus 11cfs from the Still River). This is similar to the low flows we had last fall. Colebrook Reservoir (it's the big one along Old Rt 8 on CT/Mass line and right above Hogback/Goodwin) needs water, and until we get substantial rainfall, expect mostly minimal releases from the dam. Last I knew, an additional 25cfs was being released from Lake McDonough into the East Branch (it dumps in 3/8 mile below UpCountry), making the total flow below that an improved 100cfs. Significant rain events will increase the flow in the Still River and the Farmington River below it (that includes permant C&R/TMA), as will any temporary fall lowering of Highland Lake (goes into Still River) or Otis Reservoir (in Mass). FYI, the low flows last fall led to plenty of rising trout and good dry fly fishing when bugs were hatching (eaiser/more efficient for trout to feed on the surface during a hatch when the water is shallower/slower). Recent weather has been highs in the 60s with lows in the 40s, so water temps are now excellent and mostly in the 50s now, making the entire river from Riverton to Unionville VERY fishable for trout. Other than two warmer days this Wednesday/Thursday, temps look great with high averaging upper 60s/low 70s, and nights in the 50s- very comfortable weather indeed. FYI, the further you go downriver the less fishermen you will see, and there are plenty of trout throughout the entire river all the way down to Unionville.

We are looking for volunteers to help with the FRAA trout stocking on the afternoon of October 10th- call store at 860-379-1952 to sign up. They will stock 1,000+ rainbows & brookies in the upper river- we are still collecting donations to fund this stocking, just drop them in the jar next to the cash register. The more we get, the better the stocking.

Cherry pick during low flows and only fish the better water where you have some flow & depth (depth is a relative thing, when flows are down, a 2' pothole in a 1' riffle can hold a big trout). The upside to low water is that it's easy to read the water and figure out where the trout are, it congregates the fish, and if there is a good hatch you will typically see plenty of rising trout. The downside to low flows is spookier trout and less good holding water. A big key to success during these conditions is a stealthy approach, smaller flies, and using longer leaders (12-15' or even longer). Stay a bit further away from the trout, wade slowly & carefully, and if you have a lighter line weight rod (#2-4) now is the time to use it for a more delicate presentation. A longer/lighter tippet (3-5' of 6x-7x) will greatly assist in getting a drag-free float with your #16 and smaller dry flies (5x is fine for bigger bugs like Isonychia).

We are seeing a lot more Tan Caddis averaging #16-18 now. They can be on the water at any time, but especially mid/late mornings and again later in the day. Terrestrials (beetles, ants & hoppers) remain a good midday choice. You can even combine a buoyant dry with a small beadhead nymph for a Dry-Dropper combo. Tie 1-3' of tippet to the dry fly hook bend, and run the beadhead nymph on the other end. Go longer (2-3') when there is not much hatching and/or you are fishing deeper water, go shorter (12-18") when there is hatching activity and/or you are fishing shallower water.

Other bugs:
Assorted Caddis #14-22 (tan, brown, black, olive)- think mornings & evenings, but they can be on the water anytime. If you want to blind fish Caddis dries in the riffles and broken water, stick to slightly bigger ones around #14-16. Pupa in #14-18 are excellent choices to nymph with. October is the month we see a few #8-12 Giant October Caddis, with dusk a peak time (they come out to egg-lay). Isonychia ("Isos") #12-14, typically hatch about mid afternoon until dusk in the faster water. They get smaller as the season progresses, and will average #14 in October. Blind fishing Iso dries can be effective, as can fishing Iso nypmphs or swinging Iso wets/soft-hackles. We are still seeing some Cahills/Summer Stenos #12-16 & Blue Wing Olives (BWOs/Olives) #22-26 in the eves (BWOs also hatch on cloudy afternoons). Sometimes fish will key on BWO spinners, which are typically change to rusty brown, not olive. If you look on the rocks in fast water, you will still see big Stonefly nymph shucks, as well as #14-20 Yellow Sally Nymph shucks (look for them on downstream side of rocks, shucks will be very light in color). The best dry fly activity has often been in the riffles and the upper end of pools including Pipeline, Roberts, Whittemore, People's Forest, Church Pool, Greenwoods and the Boneyard.

The Farmington River is now Catch & Release from 9/1 until Opening Day in April (21 miles straight from Goodwin/Hogback Dam in Riverton down to Rt 177 Bridge in Unionville).

In the fall, many nymphs/larva are immature and therefore smaller, plus some like the fall Blue Wing Olives are also tiny, so when nymphing make sure to downsize your flies (doubly true when flows are lower). #18-22 nymphs are often the key to success, with fly size more important then the exact pattern (although I prefer either a little flash or a fluorescent hot spot in my small nymphs).  I like 5x-6x flurocarbon tippet for fishing small nymphs (5x is usually light enough, but they will sink quicker on a long 6x tippet due to decreased water drag from thinner tippet, and also may present more naturally do thinner tippet being more limp/flexible). If you like to go light on your tippet, I HIGHLY recommend the new Cortland Ultra Premium Fluorocarbon, it is stronger and more durable than any other fluoro on the market and will save you both flies & fish. 6x in this stuff will break less than 5x in other brands. Some days small flies are the difference between struggling to hook trout versus catching a bunch. The biggest exceptions to the small flies would be Isonychia nymphs #12-14, big Stonefly nymphs #6-12, and #8-12 Giant October Caddis (Pycnopsyche). Isos are typically active later in the day, say late afternoon through dusk. The big Stonefly nymphs emerge by crawling out onto rocks overnight and in the early mornings, making early/mid mornings prime to fish their large imitations for larger trout.  Giant October Caddis are most active at the end of the day,  after dark, and also at first light. If you do have a big fly on, make sure you also have another pattern in your rig no bigger than a #18, it's more in line with what they are seeing this time of year. Or pair it up with a #14-18 tan/brown Caddis pupa.