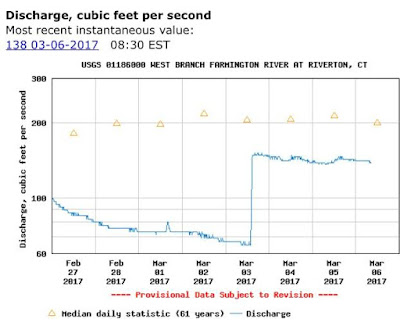 After 7 months of low releases from the dam the MDC has bumped the release to 130cfs. So at least for a while, expect normal flows. From a fishing viewpoint, the flows are a good thing, and combined with all the mild to normal weather, should lead to more good fishing. Water temps are in the low/mid 40s. with upward temperature swings in the afternoons below the junction with the Still River & downstream on sunny/mild days.

We have been seeing the Winter/Early Stones lately- Tiny Winter Black Stone sz 18-24 (Capnia), Early Black sz 14-16, and Early Brown sz 14-16. Trout do rise to the Stones, but feed even more on the nymphs. Specific Stonefly imitations work, as do generic flies like Princes, Pheasant Tails and Hare's Ears. Despite "the experts" saying the prime fishing in the winter is 11am-3pm, I often do best from mid-afternoon until dark, when water temps are normally highest (except during times of heavy snowmelt). Other bugs to look for include Winter Caddis sz 18-24 (mornings primarily, but sometimes into the afternoon), and Midges sz 22-32 (typically afternoons). For Midge larva & pupa nymphed deep, think black, olive, or red. The Winter Caddis hatch best after cool to cold nights, mild nights actually make for light hatches of them. Stones usually hatch better on mild days. Nymphing remains the most consistent producer of trout,  but streamers are have been effective as well(just remember to fish them slow & deep first, and if that doesn't work, strip them in faster.

Streamers have been excellent in the past few days. Experiment with colors & retrieves to find what's best at any given moment (it changes). I would also try to make your presentations mostly slow & deep due to the cooler water temps, both swinging and slow retrieves are good choices. Experiment though, sometimes even in cold water the trout will respond to a fast retrieve, but overall in winter they like it slower.

If you like our fishing report, please consider buying your gear from us. We generally ship the same day, for free anywhere in the country on all but the smallest orders. Our shop can only exist with your patronage.
Posted by UpCountry Sportfishing at 9:13 AM