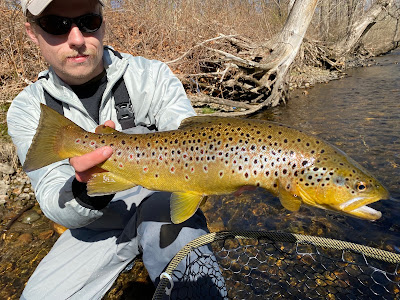 Plenty more big trout. Aiden, a client of Derrick this past weekend, with the biggest of SIX (!) 18" plus fish landed on a guide trip- this wild fish taped out at a little under 22"!!! Next is a clean looking brown by Lane Finely, and 3rd is Gordon Perkins with a quality fish. 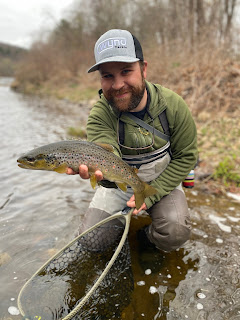 We just got in one last batch of Strolis Infant Stones, tungsten #14s- 100 brown, 100 black. The brown ones can also double as a Hendrickson nymph. Great fly pattern, get 'em before they sell out again.

So here is the latest: Fishing is finally picking up recently, albeit it's still mostly subsurface with nymphs, streamers & wet flies/soft hackles. Everything but the permanent TMA/CAtch & Release (C&R) was stocked last week. The Hendrickson hatch is imminent- a few have been spotted in Canton/Collinsville/Unionville, but not enough to call it a "hatch" yet. I imagine it will get going in that section sometime later this week, and once it starts there it should should up in the permanent TMA/C&R about a week later and work it's way upstream over time. Cold weather Thursday/Friday may stall the hatch out a bit, but it goes back up into the 50s over the weekend (60s today & Wednesday!). There has been limited dry fly activity, with Church Pool & Greenwoods hotspots for that. Think Early Stones & Baetis/Blue Winged Olives (BWOs). Both are an afternoon deal: BWOs like crappy, overcast cooler days, Stones like warmer/sunny days, so it's usually one hatch or the other, but not both. Subsurface with nymphs & streamers is by far the most consistent, with some big fish getting caught.

Stocking Update: Last week the entire river outside of the permanent Catch & Release (C&R)/TMA was heavily stocked. Hard to go wrong with Woolly Buggers (black, olive) & Junk Flies (Mops, Eggs, Squirmies, Green Weenies) it you are fishing for fresh stockers. #14-16 Hare's Ears typically work well too. The permanent TMA/C&R will get stocked at some point later this month (Rt 219 bridge in New Hartford upstream to bridge abutments at tailout of Whittemore, just above the Campground entrance.) 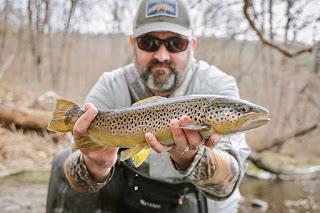 Posted by UpCountry Sportfishing at 10:56 AM