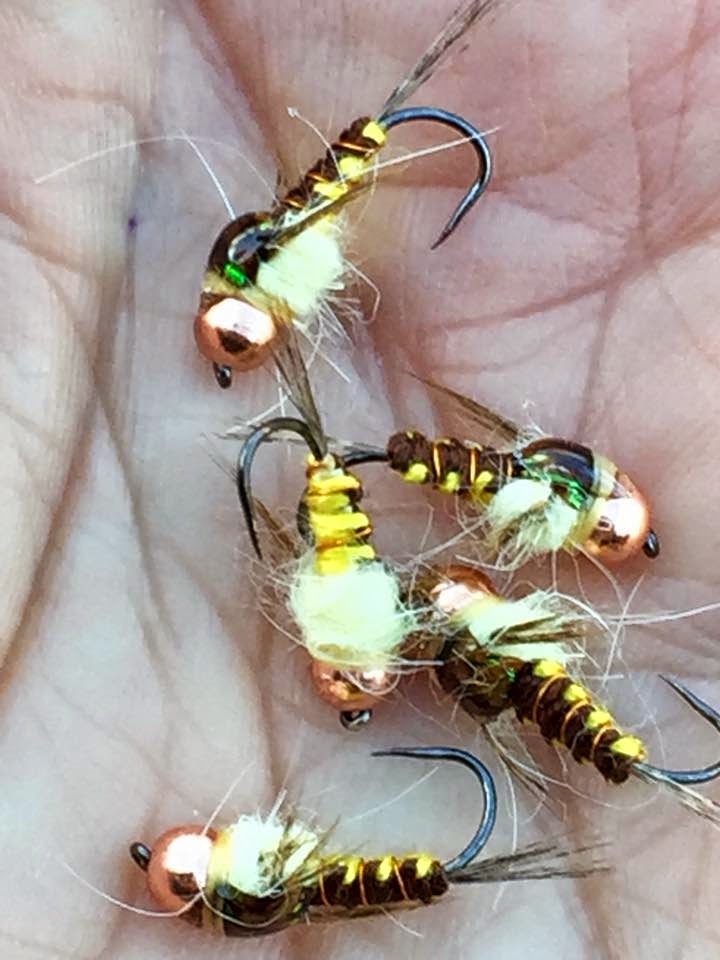 Rich Strolis dropped off another batch of flies this morning, including his Tungsten Woven Mayfly Nymph, which could also double as a smaller Golden Stone. Opening Day is today, Saturday April 11th. Started out cold & gray, but the sun peeked out finally, and air temps have crept into the 50's but it's windy- Sunday will be sunny and a balmy 67 degrees, and not windy at all. Flow in Riverton is a medium & very fishable 278cfs, but from the Still River down it's pretty high (but clear) at just over 1,200fs & steadily dropping. Should be 1,000cfs or less by Sunday. Morning water temps have been averaging in the upper 30's over the past week, but look for them to go up this week- highs will all be in the 60's, and nights will average in the 40's. It's about time!!! This will ultimately push afternoon water temps into the mid and even upper 40's as the week progresses. Although cool temps have made for some slow fishing at moments, expect things to pick up a bit every day over the next week as water temps rise, and water levels drop. Fishing will be better & more comfortable Sunday. In my opinion there is no need to start early, the highest water temps & best fishing are typically in the afternoons in April. If fishing the higher water below the Still River, think nymphs & streamers, and fish closer to the banks, anywhere there are current breaks. The takes by the trout have been LIGHT in the colder water, the fish are lethargic and you have to put the fly right in their face. Stick to the wider pools & also inside bends. High water scares many fishermen away, but the fish are still there and catchable if you approach them correctly. They simply move closer to the banks, out of the heavier current. You can upsize your nymphs & streamers, no need for light tippets, and make sure to fish your flies slowly, down near the bottom. 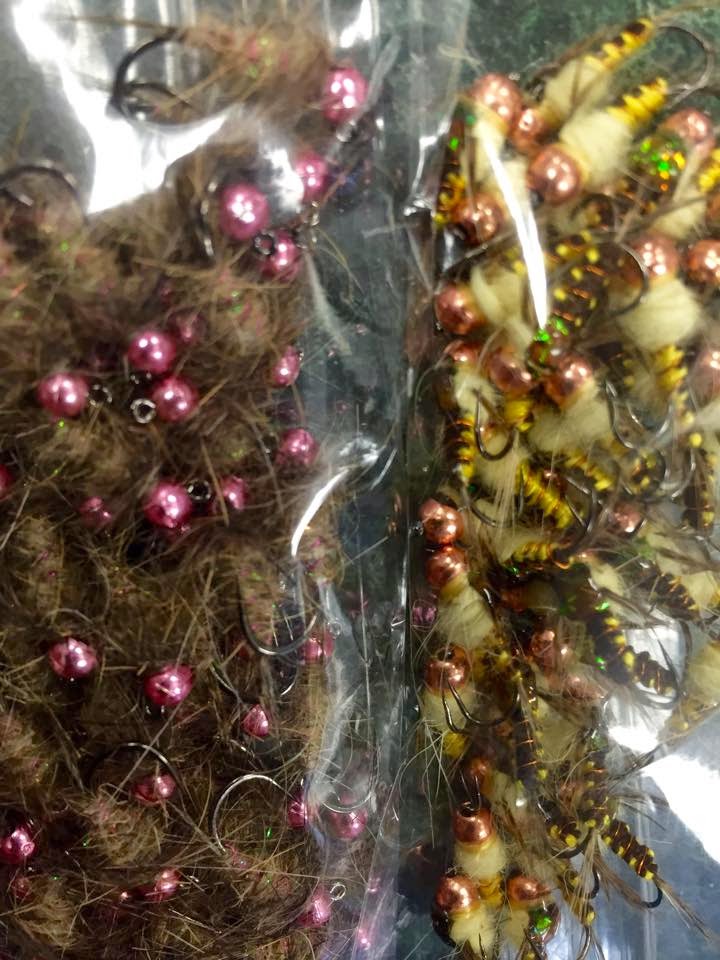 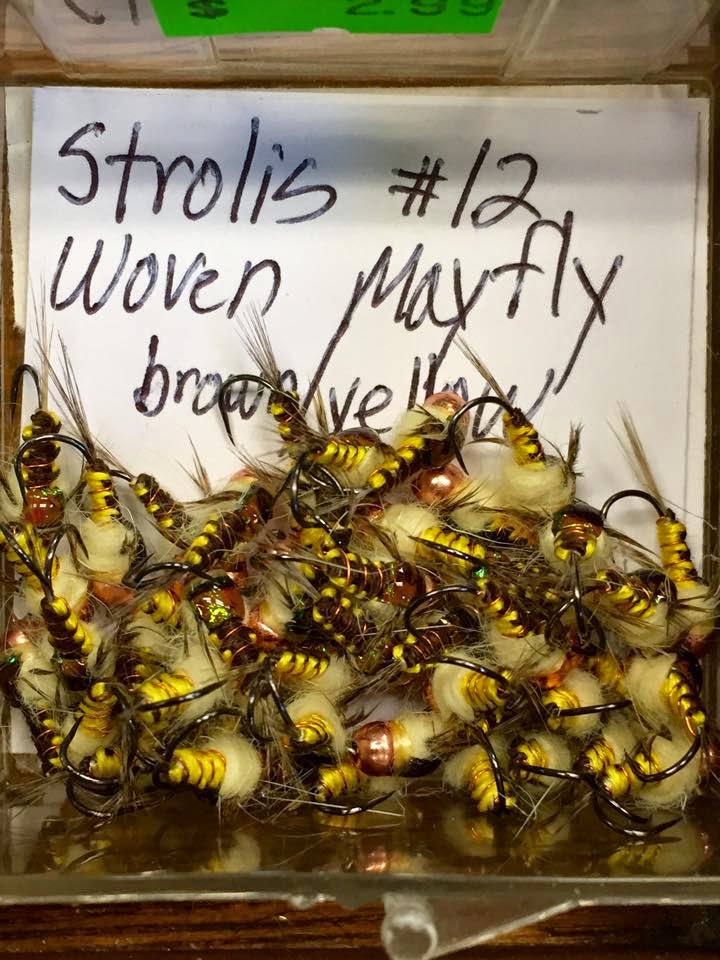 The DEEP was back stocking more trout throughout the river last week for the 3rd time in 2 weeks. The dirt road into Greenwoods & Boneyard is once again drivable now that the snow is mehighs lted. Best action lately, due to the higher flows below the Still River, has been streamers such as Rich Strolis's Ice Pick, Jack Smola's Wooly Jack, plus heavily weighted nymphs including larger stoneflies, green and olive caddis larva, egg flies, San Juan Worms, Hendrickson nymphs, larger Pheasant Tails, Princes, and Pink/Silver Lightning Bugs.
I had a good outing on Wednesday 4/8, catching a bunch of recent stockers, plus a nice wild brown. #14 Pheasant Tails did the trick at 900cfs flows, water temp was just over 37 degrees. Felt more like winter. Fishing reports have varied greatly, depending upon the day and who you talked to, with some anglers doing quite well and others struggling. As flows drop & temps warm over the upcoming week, look for afternoon water temps to push well into the 40's. Up in Riverton, temps will stay colder due to cold water release from the bottom of the dam (still mid/upper 30's up there). So from the Still River downstream, especially on mild/sunny days, the water will be noticeably warmer, which often translates into more active trout. Those who have found pods of freshly stocked trout recently have racked up the biggest catches, but some bigger holdovers are mixing in here & there. Fish a spot, but if it's not producing, move on, don't linger. Lately the more water I cover lately, the better I do. I might come up empty in 2-3 spots, and then bang fish in the 4th. Nymphs & deeply/slowly fished streamers are the most reliable fish catchers in the cooler waters of the early season, especially when flows are up. The dry fly guys have been back at it when flows have been normal, and catching some fish at moments (ideally look for days without much wind). Big, flat, wide pools like Church, Greenwoods, Whitemore, Campground & Beaver Pools are your best bets if you want to fish dries. The Winter Caddis (AM) are waning but you may still see some, in the afternoons you should see Midges (#20-28) & Early Stones (#12-18). With the Caddis & Stonefly dries, try both dead-drifting them and also lightly twitching them, Midges should mostly be dead-drifted. Larger #16-18 early season Olives (Baetis Vagans) will be hatching soon, followed by Hendricksons. Both are afternoon hatches.
Subsurface, it's not too early to start fishing Hendrickson nymphs, they get active and end up in the drift a good month before the hatch begins, and Bruce Marino ties us a DEADLY nymph for this- ask and we will point you toward it Hendrickson nymphs catch me a lot of BIG trout in April. A bigger #12-14 Pheasant Tail can also work well. Hendrickson Nymph patterns can also pull double-duty as early season stoneflies. Early Black & Early Brown Stoneflies (sz 12-16), Pheasant Tails (sz 12-18), olive/green caddis larva (sz 8-16), cased caddis larva (sz 8-16), midge larva/pupa (sz 16-20, especially in red), attractor nymphs (sz 12-18 in Red Headed Stepchild, Copper Johns, blue Lightning Bugs, Yellow Prince, Rainbow Warrior, and egg flies (sz 10-18) are still a good choice (rainbows & suckers are both spring spawners in March/April, contributing fish eggs to the drift), etc. Don't be afraid to fish some some gaudier/flashy/attractor-type nymphs, the trout sometimes show a preference for them, doubly true for recently stocked trout. If you are fishing streamers, remember that a slower presentation (swinging and/or slow stripping & twitching) matches up with the slower trout metabolism due to cooler water temps- but as always, play with your presentation and let the trout tell you how they prefer it, they may still want a bit faster strip at moments. Try using a floating line and slowly bouncing/hopping a weighted Fishskull Skulpin Bunny on the bottom- use a 0x-2x tippet with this pattern & method, that fly is heavily front-weighted and rides hook point up. If you are using unweighted or lightly weighted streamers, use something to get them down- sinking line, sink-tip line, sinking leader, or split shot. Slow & deep is typically the name of the game until water temps get up near 50 degrees (probably late April if you are downstream of the Still River).
-Torrey
Posted by Unknown at 11:54 AM