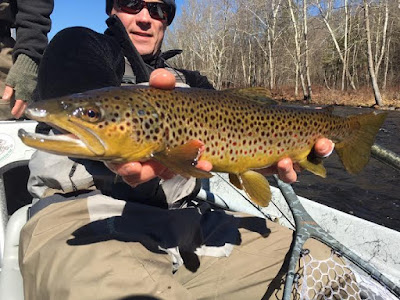 Starting this week on Monday 3/7, will will be open on weekdays 8am-6pm (instead of 5pm), weekends will remain 6am-5pm year 'round.

Pictured is local celebrity fly tyer/fly fisher/author/fly designer Rich Strolis with a very nice Farmington River brown trout he recently caught. The river was stocked last week, from the dam in Riverton down to Whittemore (just above the Campground), and from just below the Rt 219 bridge in New Hartford down to at least Canton/Collinsville. The permanent C&R section (Campground to Rt 219) will get stocked in latter April. There were already plenty of trout all over the river, so this will only make the fishing better. The recently stocked trout will be the easiest to catch, the holdovers/wild ones will be pickier but bigger. It's good to have options. For the fresh stockers, the 'ol Woolly Bugger in black, olive or white is pretty deadly. So too are various nymphs, especially egg flies. A Woolly Bugger with a nymph trailed 18" behind it can be deadly- start your drift with a dead-drift, going into a swing, and then strip it back in after it's below you. Can be DEADLY sometimes, and it gives the fish options.

River is in sweet shape and at a medium water level, total flow per USGS in the permanent Catch & Release area is 418cfs- 201cfs from the dam in Riverton, with 217cfs & dropping from the Still River. Clarity is excellent. Fishing has been good in the stocked areas for browns & bows averaging 12-14". With a good chunk of the river freshly stocked now, it should help spread the pressure out. That will be a good thing this upcoming week, because with air temps in the 50', 60's & 70's, many will be taking a vacation or "sick" day to play hooky this week- Wednesday is predicted to exceed 70 degrees, and Tues/Thurs will both top 60. I'm expecting to see heavy hatching of the Early Black Stones (#12-16) this week, as warmer weather in March gets them cranking. We've already been seeing modest numbers of them the past 2 weeks, so it will only get heavier. The smaller #18-20 (and smaller) Tiny Winter Black Stones (Capnia) have also been hatching for a while. When the Early Black's pop, they often skitter along the surface, sometimes leading to explosive rises. In addition to specific #14-16 black Stonefly nymph patterns, Princes in that size range can be deadly. For dries, if you have fish feeding on top, try CDC patterns & Elk/Deer hair patterns in that same size range. Try both dead-drift & skittering with the dries, often the trout will only hit ones that are moving. This winter I've had my overall best success by nymphing with two flies in 3-5' of slow to medium speed water around drop-offs, current breaks/current edges and submerged structure (rocks/trees).

Fishing has been good to excellent many days this winter, especially for the skilled nymphers, but trout have been eating dries & streamers as well. Blue Wing Olives (#22-26), Midges (#22-32 and Winter Caddis #20-24  hatch have been providing some good dry fly fishing on the warmer days, looks for this to kick into gear again as flows return to normal shortly. The Winter Caddis hatch is an early morning to early afternoon hatch this time of year., Mild afternoons bring the Blue Wing Olives (#22-26) Midges #22-32 with some trout feeding on the surface in the larger pools some days. Our nymphing crew has been doing well with Zebra Midges #16-20 (black, red, olive), Green/Olive Caddis Larva #14-16, Princes #12-18, Cased Caddis #12-14, Quasimodo Pheasant Tails #14-18, small Egg Flies, Squirmy Worms, Rainbow Warriors #16-18, Hot Spot Nymphs #14-16 & Stoneflies #8-16 (brown, black, golden/yellow). Don't be afraid to fish bigger #8-10 Stonflies in golden or brown, there a plenty of the matching naturals in the river, they are on a 2-3 year underwater life cycle.

Most of the Farmington trout are still in classic winter lies (slow to medium speed water with some depth). Skip the faster water and focus on pools, deeper pockets, moderate riffles, and deeper runs. Look for fish around current edges, drop-offs & structure; anywhere there is a break from the faster current combined with some depth. Trout are cold blooded so in the winter they don't have to eat as much and conserve energy by moving out of the faster water and holding in slow to moderate water. Having said that, when nymphing we are still hitting a lot of fish in medium speed water, especially where moderate riffles start to drop into deeper water. While you may still hit fish in knee-deep water, spots with 3-5 feet of depth seem to be holding the lion's share. Trout will often pod up this time of year, so where you find one, there may be a bunch more. Nymph slow & deep and expect strikes to be subtle. Get your streamers well down into the water column using weight or sinking lines/leaders and don't fast strip them, but rather swing, twitch, and slow retrieve them. Winter trout like their streamers slow, deep & easy to catch. You can even nymph small to medium sized streamers under a strike indicator.
Posted by UpCountry Sportfishing at 10:25 AM