Monday 6/20/16- Summertime is Trout Time on the Farmington 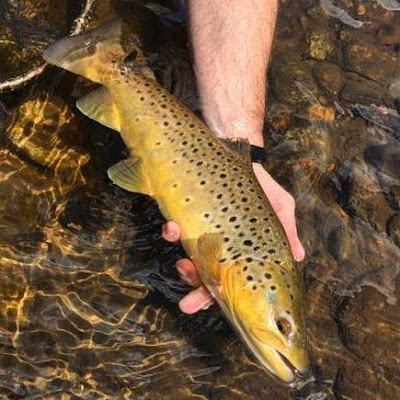 Yet another perfect brown by Farmington regular Andy Lyons this past week. Summer officially arrives today, and unlike most other trout streams, flows & temps remain excellent on the Farmington River all year due to us being a tailwater (meaning we are a cold water bottom release out of a deep reservoir). Many reports of 18-21" trout from customers lately. Water level, temps & clarity all remain beautiful & normal for late June: medium 313cfs total flow in the permanent Catch & Release section (New Harford/Pleasant Valley), with 294cfs from the dam in Riverton, and 19cfs from the Still River. Water temp is averaging mid/upper 50's in permanent Catch & Release section (colder up near dam, warmer downriver). The Ten Day Forecast has highs mostly in the 80's, with lows in the 50's-60's, and a couple of days going into the 90' too (ouch!).  I went out after work Sunday night, I saw a good amount of #16 Sulfurs (prob Dorothea), assorted Caddis (mainly tan in #16-18), a few #10 Iso's, and sporadic hatching of #10 yellow mayflies (either Varia or Potamanthus, not sure which). Occasionally large trout were rocketing vertically out of the water near the stream edges. Guide Zach St. Amand reported seeing plenty of Needhami (Chocolate Dun, #22-26) hatching in the afternoon on Sunday, not sure if he was downriver or in the C&R section. Don't neglect terrestrials such as ants & beetles this time of year, they are an excellent choice, especially during lulls in hatch activity.

We are currently seeing various hatches on & off all day long. Sulfurs remain the glamour hatch, and the past week or so we've been getting two batches each day: first hatch is from noonish to mid afternoon, second is in the evening. Afternoon Sulfurs are #14-16, evening ones seem to be averaging #16, with some 14's & 18's too. I suspect the afternoon ones and bigger ones are the Invaria Sulfurs, and the evening ones look like the smaller Dorothea's to me (smaller & a more intense yellow). Also we are seeing good hatches of assorted Caddis #14-20 (especially tan averaging #16-18, but also olive/green, black). In the C&R we are on the tail end of the March Brown/Gray Fox #10-14 hatches, you may still see a few, but you should see them in Riverton for another week or two. Other bugs we are seeing but in smaller quantities: Isonychia #10-12 ("Iso's", we are seeing a few in permanent C&R, but there is legitimate hatch downriver of the C&R, especially in Canton/Collinsville/Unionville), and Light Cahills #12-14 (evenings). Haven't had any Vitreus ("Pink Lady") reports lately, but there might still be some in Riverton. Nymphing has been a consistent producer of trout whether or not there is hatching activity. I would have a Caddis pupa on my rig while nymphing about 100% of the time right now, and the 2nd nymph I'd match to whatever else I was seeing hatching.

We are starting to see big Stonefly shucks all over the rocks in fast water. The large varieties of Stones crawl out to emerge at night and in the mornings, so it can pay to hit the water with Stonefly nymphs at first light when they are most active. They will range from #4-12, I usually match them with #8-10 patterns in either golden/yellow or brown. Focus on the medium to fast water, that's where they live. Riffles, pocket water, runs, pool heads, and rapids are the best spots to fish them. Don't neglect the edges of the stream, especially early in the morning before fishermen have walked all over the river. The bugs often migrate to the edges to crawl out, and the trout will follow them. The bigger species of Stoneflies live 2-3 years, so they are always present and are a good year 'round nymph choice when paired with a smaller nymph.

Isonychia, or Iso's, are just beginning to show up in the C&R section, but they are a legitimate hatch down in Canton/Collinsville/Unionville. Like the March Browns/Gray Fox, they are a "trickle hatch", coming off one here & one there, heaviest from mid/late afternoons through early evening normally. Cooler, cloudy days can see them start earlier. They are a big bug, with a gray/brown body (females can even have an olive tinge due to the olive-green egg mass they carry) and medium to dark gray wings, and very light colored legs. They like faster water- pool heads, riffles, pocket water & rapids. The nymphs are excellent swimmers, they can rapidly dart 6-12", just like a small minnow. The June/July batch averages a #10 on the Farmington, but they can be as big as a #8, and as small as a #12. They get smaller later in the summer, and even smaller in the fall. You can blind fish Iso dries, and nymphing with Iso-type nymphs can be very effective. If nymphing, try both dead-drifting, swinging, and stripping them. Overall I do best on the dead-drift, but I've seen many days when the trout won't eat your nymph if you don't move it. Some Iso's migrate shoreward and often crawl out on rocks to hatch, but some also emerge on the surface just like most other mayflies. Swinging wet flies such as a big Leadwing Coachman can be effective- the best presentation angle is standing near or on the shoreline and swinging them toward the shoreline (that is the direction the naturals migrate). Specific Iso nymphs, emergers, duns & spinnners all have their moments. You can also fish bigger #10-12 Prince Nymphs & Adams dry flies to match this bug.