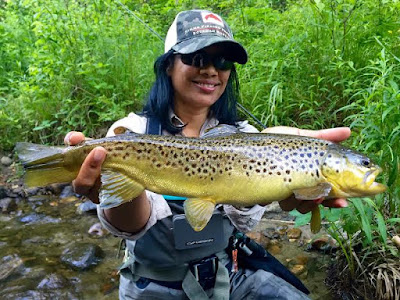 My girlfriend Mandy with a nice brown from last night. We went out for the last few hours of the day Thursday in the upper end of the Catch & Release area, and the nymphing in the fast water was very good with various nymphs, especially #16-18 olive nymphs, #8 Stones, #14-16 Caddis pupa, and #16 hot-spot patterns. We saw a very good Attenuata hatch- it's a light colored Blue Wing Olive in #18-20, and the trout were gently sipping in the winged duns in the slow to medium speed water. Mandy lost two significantly larger browns, both hooked in the fast stuff. I saw a couple of #10 Isonychia, a few bigger #16 Cornuta Olives, and a smattering of #16-18 Sulfurs, but the trout were definitely keyed into the Attenuata/Blue Wing Olives, they were the dominant bug by far. Fishing was good, and surprisingly we saw almost nobody else. Water temp was 60 degrees at 7pm in the C&R, and at the end of the night I stopped in Riverton and took a temp at the Rt 20 Bridge and got an icy cool 50 degrees. Despite a virtual drought, flow is about normal at a medium-low 259cfs (medium-low) total flow in the permanent Catch & Release section (Pleasant Valley/New Hartford), with 15cfs of that coming from the Still River. Weekend will see highs in the 80's, lows in the 50's. Ten Day Forecast is hotter with highs moving into the mid 80's to low 90's, and lows in the 60's. 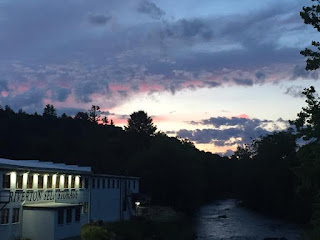 Bugs you may see include: Blue Wing Olives, assorted Caddis, Sulfurs, Light Cahills, Stoneflies, Needhami, Summer/Winter Caddis, Ants & Beetles, Craneflies & more. Different bugs are hatching in different sections of the river, so read this paragraph if you want to hit a specific hatch. The Sulfur hatch is mostly confined to the upper river now, I's say your safest bet is Riverton, from about the Rt 20 bridge up to the dam- you may see some downstream of that, I'm not sure what the lowest point for them is. We have been getting 2 batches a day, with one around 11am-2pm, and then again later in the day. Evenings have also been bringing Blue Wing Olives #18-20 to the C&R section, and #12-14 Light Cahills which present on this river in a deep yellow. The evening Olives are a very light bright greenish/olive-yellow, and easy to confuse with Sulfurs from a distance. They are very light colored when hatching, but darken up while they drift.  Mornings in the C&R have been seeing Summer Caddis #18-22 hatching in the riffled water, and very good Needhami Duns #22-26 hatching in the mornings, and often going into the afternoon. Ants & beetles of all sizes are working during the midday on the entire river. You can also blind-fish the banks, riffles & pocket water with bigger terrestrials such as Mini Chernobyls & Monster Beetles. Isonychia are still best below the C&R section, I'd stay from below 219 in New Hartford, all the way down to Collinsville. Look for them to start going in the lower C&R anytime now. I've been seeing a few there, but other bugs are hatching better and the trout seem to be keying on them instead of the Isonychia. Remember they hatch in FAST water, not the slow stuff. For you nymphers, overall the faster water has been the most productive lately.

The scoop on Stoneflies:
If you look you will see big Stonefly shucks on the rocks in fast water. The larger varieties of Stones crawl out to emerge at night and in the mornings, so it can pay to hit the water with Stonefly nymphs at first light when they are most active (they crawl out at night and in the mornings on rocks in the fast water). I usually match them with #8-12 patterns in either golden/yellow or brown. Focus on the medium to fast water, that's where they live - riffles, pocket water, runs, pool heads, and rapids are the best spots to fish them. Don't neglect the edges of the stream, especially early in the morning before fishermen have walked all over the river. The bugs often migrate to the edges to crawl out, and the trout will follow them. The bigger species of Stoneflies live 2-3 years, so they are always present and are a good year 'round nymph choice when paired with a smaller nymph. I like to nymph the fast water in the morning with a big stone paired up with a #16 Caddis Pupa (usually tan).

Isonychia are a "trickle hatch", coming off one here & one there, heaviest sometime from late afternoons through the evening normally. Cooler, cloudy days can see them start earlier, hot days can push them off closer to dusk. They are a big bug, with a brown to gray-brown body (females can even have an olive cast due to the olive-green egg mass they carry) and medium to dark gray wings, and cream colored legs. They like faster water- pool heads, riffles, pocket water & rapids.  If nymphing, try both dead-drifting, swinging, and stripping them. Overall I do best on the dead-drift, but I've seen many days when the trout won't eat your nymph if you don't move it  Swinging wet flies such as a big Leadwing Coachman can be effective- the best presentation angle is standing near or on the shoreline and swinging them toward the shoreline (that is the direction the naturals migrate). We sell a variety of specialty Isonychia nymphs and dry flies to match the hatch. Some of my biggest dry fly trout have come on Iso patterns, it's probably my favorite mayfly hatch, due to the size, duration, the fast water it hatches in, and the big trout it entices to eat.

If you like our fishing report, please consider buying your gear from us. We generally ship the same day, for free anywhere in the country on all but the smallest orders. Our shop can only exist with your help.
Posted by UpCountry Sportfishing at 9:20 AM