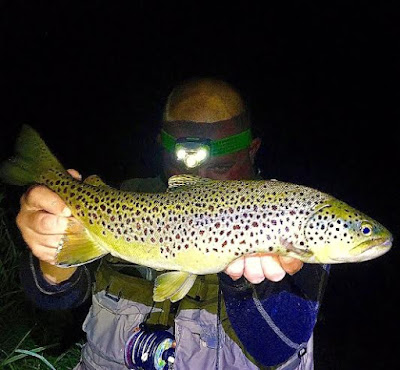 Big brown by customer Mike Andrews, mousing on the night shift this past weekend. Big mouse patterns fished on the surface after dark sometimes result in bruiser browns, and July is a peak month for that. See bottom of report for another really nice customer trout by  D.J. Clement. The past 3 days have seen customers give us many good reports, including some big browns up to 23" (on a dry!). Even those who are struggling are getting plenty of shots at rising trout. Have to be on your "A" game right now though, these fish have seen a lot of flies & bad presentations in 2016. You need accurate, dead-drift, stealthy presentations now. Ten Day Forecast sees highs from the low 80's to the mid 90's, with nights averaging in the 60's. Hatches in the Catch & Release section are best in mornings & evenings, but the upper 2 miles in Riverton are an exception due to the colder water (still getting a Sulfur hatch in Riveton sometime between 11am-3pm, and again in early evening). Total flow is 234cfs in the permanent Catch & Release area, with 11cfs from the Still River- this is medium-low and normal for July, very fishable. I drove up the river taking water temps after work Sunday night, and I got 66.5 degrees in Pleasant Valley in the middle of the C&R, and 56.5 degrees at the Rt 20 bridge in Riverton (temps vary daily, and depend upon time of day, weather, and distance below dam). I'd say you're fine fishing anywhere from New Hartford Rt 44 bridge by Satan's Kingdom up to the dam in Riverton. You can probably fish right down to Canton during this hot weather, but keep an eye on water temps if you are downriver, and if it's 70 or higher head upriver to cooler water. Early to mid morning is best time to fish downstream of UpCountry, as the water temps downriver are lowest in the morning, and rise as the day progresses. tiny Needhami & small Winter/Summer Caddis are still the dominant AM hatches in the C&R, with Iso's & Blue Wing Olives (#18-26, and Rusty Spinners too) late in the day when things cool off a bit. Tan Caddis in #16-20 can mix in anytime, especially early & late in the day. Nice Big #10-12 Iso's are hatching throughout the river (but not up in Riverton yet)- hot, sunny days (like the current weather) will typically push the hatch later in the evening, cool/overcast ones can see it start in late afternoon. Stay until dark for the best evening dry fly fishing (Riverton excepted, evening hatches both start & end early there). Terrestrials such as ants & beetles in #10-20 are top choices in July all over the river, just about anytime (and especially midday on hot days when they are most active and hatches are dormant). Trout are getting very PICKY, so make sure to read the two paragraphs below.

Summertime Fishing Advice:
For detailed hatch info, see several paragraphs down. Fish are getting pickier and some fishermen are struggling to hook up, which we see happen every year in the Summer. The trout have been getting caught & released for months, and most of the bugs (Iso's & Stones excepted) are getting smaller, with most in the #18-26 range (Olives, Attenuata, tan/black/brown Caddis, Summer/Winter Caddis, Midges, etc.). Trout sipping tiny bugs on flat water is some of the toughest dry fly fishing out there. Learn how to do a Reach Cast, which helps present your fly to the fish before your leader, and also usually makes it easier to get a drag-free float. Longer leaders, lighter lines, lighter tippets, smaller flies, proper fly selection, accurate casts, and drag-free presentations are the keys to unlocking the puzzle. Many anglers THINK they are getting a drag-free float, when in reality they are getting micro-drag they cannot see. Longer tippets & shorter casts will help give you a natural, drag-free presentation, and as flies get smaller you need to lighten your tippet. For all but the biggest dries, think 6x & even 7x tippet (for tiny flies like the #24-26 Needhami for example), for Iso's and big foam terrestrials you can do 5x and even 4x (it's a bigger, more wind resistant fly, and you are fishing it in the fast water). FYI if it's not too windy and you are able to turn your dry fly over, lengthening your tippet out to 3 or even 4 feet will do wonders for reducing drag, it will give you the same effect as dropping down 1-2 tippet sizes.

For nymphers, some of the same advice for the dry fly guys applies to you too. Longer leaders, accurate casts, and drag-free floats are all very important. While there are exceptions (#6-12 Stonefly nymphs & #10-12 Iso nymphs), I frequently find smaller nymphs (no bigger than #16-20 patterns if tied on short-shank curved scud hooks, and #18-22 if tied on standard hooks) to be the key to success many days in July, August & September. Most of the natural bugs are smaller this time of year, and our highly pressured trout seem less suspicious of smaller flies too. Use a two fly rig with a bigger fly, but make your second pattern something SMALL. If one of your flies is gaudy, flashy or has a hot-spot, make sure your second pattern is drabber & more natural (maybe beadless or with a black or brown bead instead of a shiny gold, copper or silver one). Usually 5x fluorocarbon tippet is light enough, but sometimes in pressured spots (like Church Pool) I'll go down to 6x, especially if it's in the second half of the day after the fish have been punished & it's sunny and the flies are small. No need to go light in the heavy pocket water, especially if you are fishing bigger flies. Lots of trout pile into FAST water in the summer, so make sure to make some casts there. Big Stones, many Caddis larva/pupa, and certain Mayflies all live in faster water, so put your flies where the food (and the trout) are.

We have a bunch of both demo & new Sage ONE's, Circa's and ESN's on sale, priced to sell, get 'em while we still have 'em- current stock of them is listed on our website if you can't make it in to the store, and you can also purchase them directly off our site. We also recently received 50 pairs of Snowshoe Rabbits Feet in natural colors (cream, tan), and then we received more in light & medium dun. The past couple of years they have grown increasingly hard to get from our suppliers.

Hatches Update:
The Isonychia (#10-12) hatch is up to Pipeline/Lyman's Rock, but I still  haven't had any reports of them above the Still River in Riverton, nor have I personally seen them up there as yet (soon!). Remember they hatch in FAST water, so focus on pool heads, pocket water and faster riffles. They normally hatch later in the day, and the hotter it is the later they start up. Other bugs hatching include: assorted Blue Wing Olives, various Caddis, Sulfurs (Riverton only), Light Cahills/Summer Stenos, Stoneflies, Needhami, Summer/Winter Caddis, Ants & Beetles, Midges, Craneflies & more. Different bugs are hatching on different sections of the river, so read this paragraph if you want to hit a specific hatch. People are consistently misidentifying both the evening Olives & Cahills as Sulfurs. The Sulfur hatch is ONLY in the upper river now, I'd say your safest bet is Riverton, from about the Rt 20 bridge up to the dam- you may see some a little downstream of that, but not much below that- try Van's, Canal & Beaver Pools. We have been getting 2 batches a day, with one between late morning and mid afternoon, and then again early/ mid eves- focus on the pools, especially where the riffles dump in and soften out. Still seeing various evening Blue Wing Olives #18-26 to the C&R section. Some nights we've seen #12-14 Light CahillsSummer Stenos, anywhere from #12 down to #20 or so- all Stenos have TWO tails, not three. Look also for #10-12 Iso's hatching in the fast water, they aren't in Riverton yet, but are up to Pipeline- July is usually the peak month in the C&R for the first season's batch of bigger Iso's. Evening Caddis typically run #16-20 and tan is the most common color, but not the only one (brown, black, olive/green), and some are even smaller. Mornings in the C&R have been seeing Summer Caddis #18-22 hatching in the riffled water, and very good Needhami Duns & Spinners #22-26 in the morning (some days going into the afternoon). Ants & beetles of all sizes are working during the midday on the entire river. You can also blind-fish the banks, riffles & pocket water with bigger terrestrials such as Mini Chernobyls #12-16, Stimulators #8-16 & Monster Beetles #10 (killer new fly in our bins). For you nymphers, overall the faster water has been the most productive lately- trout PILE in there during the summertime.

Iso Info:
Isonychia are a "trickle hatch", coming off one here & one there, heaviest sometime from late afternoons through the evening normally. Cooler, cloudy days can see them start earlier, hot days can push them off closer to dusk. They are a big bug, with a brown to gray-brown body (females can even have an olive cast due to the olive-green egg mass they carry) and medium to dark gray wings, and cream colored legs. They like faster water- pool heads, riffles, pocket water & rapids.  If nymphing, try both dead-drifting, swinging, and stripping them. Overall I do best on the dead-drift, but I've seen many days when the trout won't eat your nymph if you don't move it  Swinging wet flies such as a big #10-12 Leadwing Coachman can be effective- the best presentation angle is standing near or on the shoreline and swinging them toward the shoreline (that is the direction the naturals migrate). We sell a variety of specialty Isonychia nymphs and dry flies to match the hatch. Some of my biggest dry fly trout have come on Iso patterns, it's probably my favorite mayfly hatch, due to the size, duration, the fast water it hatches in, and the big trout it entices to eat. No light tippets for Iso patterns, I'm usually fishing them on 4-5x whether I'm using dries (hard to turn over leader with anything lighter) or nymphs, and with the violent strikes wets can produce I'd go 3-4x with them.

The scoop on Stoneflies:
If you look you will see big Stonefly shucks on the rocks in fast water, this will be true right into October The larger varieties of Stones crawl out to emerge at night and in the mornings, so it can pay to hit the water with Stonefly nymphs at first light when they are most active (they crawl out at night and in the mornings on rocks in the fast water). I usually match them with #8-12 patterns in either golden/yellow or brown. Focus on the medium to fast water, that's where they live - riffles, pocket water, runs, pool heads, and rapids are the best spots to fish them. Don't neglect the edges of the stream, especially early in the morning before fishermen have walked all over the river. The bugs often migrate to the edges to crawl out, and the trout will follow them. The bigger species of Stoneflies live 2-3 years, so they are always present and are a good year 'round nymph choice when paired with a smaller nymph. I like to nymph the fast water in the morning with a big stone paired up with a #14-16 Caddis Pupa (usually tan). Keep your tippet size for big Stones mostly in the 4x-5x range, no need to go lighter unless you like donating flies to the bottom & the fish. 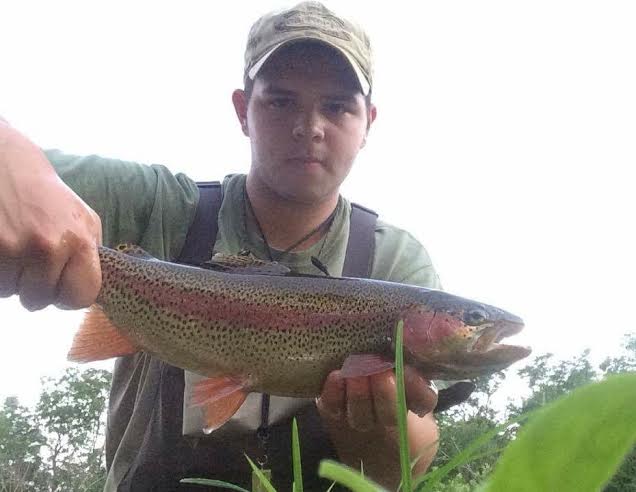 Posted by UpCountry Sportfishing at 9:29 AM