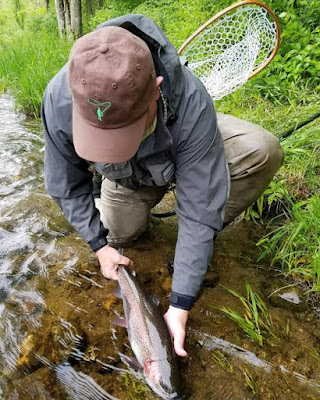 Big fish pictures just keep rolling in- Zach St. Amand's client got this 22" (yes, measured) 'Bow this week, and I've had multiple other people bring me pix of some really nice fish lately, both browns & rainbows. Caddis have been the glamour hatch up and down the river from Unionville (and below) all the way up to the dam in Riverton. If they aren't rising, then nymph deep with Caddis pupa, that's been a deadly tactic lately. Vitreus (Pink Lady/Pink Cahill/Pink Sulfur) & March Browns are starting to mix in, they are at least as far upstream as the lower 2 miles of the Catch & Release (C&R)/TMA in New Hartford, and with the milder weather here now expect them to move upstream daily.

The Farmington is medium and clear at about 450cfs & dropping through the Catch & Release area in BarkhamstedNew Hartford/Pleasant Valley/ (about 300cfs in Riverton above the Still River). Tan body/tan wing Caddis have joined the olive body/tan wing Caddis, both mostly in the #16-18 range, with some tan ones as big as a #14. Fish are rising at moments, and both streamers & wet flies/soft-hackles are catching too. Caddis are currently the main hatch all over the entire river, but the Vitreus #14-16 & March Brown/Gray Fox #10-14 will now increasingly be a factor as the hatches progress upriver. FYI the Vitreus are an Epeorus species, just like the Quill Gordon- they have only 2 tails, and the duns hatch out of the nymph near the stream bottom and swim to the surface, making flies like a Partridge & Orange a good choice to swing during the hatch. .