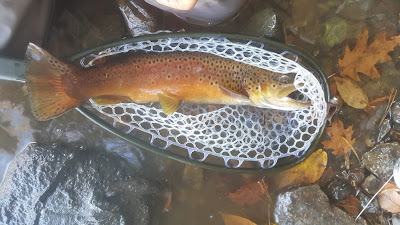 Net-filling 20" Farmington River brown caught recently by UpCountry customer Joe McFadden, on a nymph. Fall is an above average time to tie into a big brown trout, they come out of hiding and become catchable. Plus they get colored up beautifully, as you can see.

Total Flow in the permanent Catch & Release is an improved 145 cfs (100cfs from the dam, and 45cfs from the Still River). Rain earlier this week combined with a modest increase in the release from the dam (due to lowering of Otis Reservoir in Mass) has water conditions noticeably improved, and with some rain in the long range forecast, it should stay nice for a while. Hatches are mainly a mix of Caddis (mostly tan) with smaller numbers of Isonychia & Blue Wing Olives (BWOs). Caddis are still the heaviest hatch, but look for BWOs to get heavier in November. Don't be afraid to blind fish Caddis dries in the riffles, it can work quite well at moments, and it is a fun option if you don't want to nymph. Egg flies are in the mix now, especially in early/mid morning before the bugs get active. Small nymphs & Caddis pupa are working underneath. Don't be afraid to toss some streamers now, especially early and late in the day, as trout get more aggressive in the fall due to spawning.

Once again we are stocked up on #16 & #18 Hanak jig hooks, and Solarez resin too (it's by far the best resin on the market- cures fast with zero tack, and it's hard & durable). We now carry Adams Built landing nets. Eggstasy yarn is in stock, and I've used it quite successfully on trout & steelhead now. I just came back from 2 days of Steelhead fishing at the Salmon River in NY, so if you have any questions about that fishery or Steelhead in general, hit me (Torrey) up. We also have the new Hardy Zephrus Ultralite 9' 9" series of rods, from a #2 up to #5. Think of them as a crossover tight-line/Euro nymph rod that will also do a very nice job with dry flies. Although our tent sale is over, we still have many select closeout items on sale from Simms, Korkers and FishPond. We still have some closeout Sage rods & reels, plus some Hardy rods too.

With water temps in the 50s throughout the entire river, you can fish as far downstream as you like- the further you go down, the less anglers. Some anglers are targeting the recently stocked trout in Riverton, while others are chasing holdover and wild trout in the permanent Catch & Release/TMA and below it, even way downriver (Collinsville/Unionville). The easiest fishing though is probably upriver in Riverton, where the FRAA stocked 1,200 trout on 10/10 (mostly 12-14" Brooks & Bows, with about 20 large Brookies in the mix).

Hatches:
Tan Caddis #14-18 remain the bug we're seeing the most of. The October brood of Isonychia are averaging a #14 or so. Still seeing a few Lt Cahills/Summer Stenos #12-16 9(eves), and some Blue Wing Olives #22-26 are hatching in the evening (and on cloudy days), plus some October Caddis #8-12 (dusk). If you look on the rocks in fast water, you will still see big Stonefly nymph shucks, as well as #14-20 Yellow Sally Nymph shucks. Much of the best dry fly activity has been in the riffles and the upper end of pools such as Pipeline, Roberts, Whittemore, People's Forest, Church Pool, Greenwoods and the Boneyard.

November 15th, local guide Antoine Bissieux, "the French Fly Fisherman", will be the presenter at the monthly FRAA meeting- he will be talking about French "secrets" to improve your trout fishing. The French are some of the most skilled river trout fishermen in the world, as evidenced by the winning record of the French team in the World Flyfishing Championships. Both presentations are FREE and will up your fishing knowledge, all are welcome to attend. Location is Unionville Senior Center, meet & great begins at 6:30, with the meeting starting at 7pm.
Posted by UpCountry Sportfishing at 10:29 AM