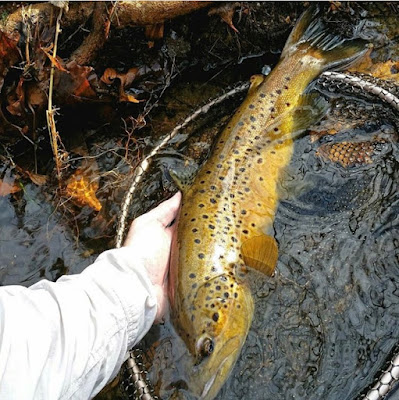 Check out this recent November slab by Andy Lyons, close to 20" of what appears to be a wild Farmington River brown trout. Once again he fooled a bunch of nice trout on nymphs.

One more mild day today (62 degrees), then typical November temps with highs averaging mostly in the 50s (40s on a few days) and nights mostly in the 30s. Time to break out the fleece, thermals & fingerless gloves. Flows are medium & excellent with a total flow of 271cfs in the permanent Catch & Release (C&R)/TMA (123cfs in Riverton plus 148cfs from the Still River). Water temps this week should range from mid 40s to low 50s (depending upon day, time of day, and distance from dam).

The cooler temps of November are usually what trigger our mid/late fall Blue Wing Olives (BWOs) #22-28 on the Farmington. When Olives end on other rivers, our hatch is just ramping up. Look for them sometime between early & late afternoon (typically 1-4pm). Light tippets (6-8x, with 7x the norm) are the rule, not so much because they are "invisible" (they aren't), but because with tiny dries you need the flexibility of the thin line to get that all important natural, drag-free float. The other option is fishing the riffles with smaller #18-22 nymphs that imitate the BWOs, this allows you to fish 5-6x tippet and often results in bigger trout than you catch on the surface. Tan Caddis #14-18 are still in the mix, and a pupa pattern fished subsurface never a bad choice, or even a blind-fished Caddis dry. Try also soft-hackles. Egg flies have been deadly of late. Small nymphs & attractor/hot-spot nymphs are working underneath. Don't be afraid to toss some streamers now, especially early and late in the day, as trout get more aggressive in the fall due to spawning.  Yellow, brown, and white or combinations thereof are all particulary good fall streamer colors.

Now that we have excellent water levels & temps, you can fish as far downstream as you like- the further you go down, the less anglers, and there are still plenty of trout all over the entire first 20+ miles of the river. Some anglers are targeting the recently stocked trout in Riverton, while others are chasing holdover and wild trout in the permanent Catch & Release/TMA and below it, even way downriver (Canton/Collinsville/Unionville). The easiest fishing though is probably upriver in Riverton, where the FRAA stocked 1,200 trout on 10/10 (mostly 12-14" Brooks & Bows, with about 20 large Brookies in the mix).

Hatches:
Tan Caddis #14-18 & Blue Wing Olives #22-26 are the two main bugs, look for Caddis to taper off and the Olives to ramp up as colder November weather moves in. Other bugs you might see in limited numbers include: smaller Isonychia, Cahills/Stenos, Black Caddis, Winter Caddis and Midges. Much of the best dry fly activity has been in the riffles and the upper end of pools such as Pipeline, Roberts, Whittemore, People's Forest, Church Pool, Greenwoods and the Boneyard.

Nymphing:
5x flurocarbon tippet should be about right, depending upon fly size, with 6x for the smallest nymphs. If you haven't yet tried it, the Cortland Ultra Premium Fuorocarbon tippet is amazing, by far the strongest out there with the most abrasion resistance, stretch, flexibility & clarity. Total game-changer, and an extra-good choice if you like to nymph with lighter tippets. Use patterns like Tan Caddis Pupa #14-18, BWO Nymphs #18-22, Mop Flies #8-12, big Stoneflies #6-12 & Pat's Rubber Legs #6-10, Antoine's Perdigons #16 (various colors), Egg Flies #10-18 (yellow/pink/orange), Attractor nymphs #14-20 (Frenchies, Egan's Red Dart, Rainbow Warrior, etc.), Quasimodo Pheasant Tails #16-22, Fox Squirrel Nymphs #12-16, and Zebra Midges #16-24.

November 15th, local guide Antoine Bissieux, "the French Fly Fisherman", will be the presenter at the monthly FRAA meeting- he will be talking about French "secrets" to improve your trout fishing. The French are some of the most skilled river trout fishermen in the world, as evidenced by the winning record of the French team in the World Flyfishing Championships. Both presentations are FREE and will up your fishing knowledge, all are welcome to attend. Location is Unionville Senior Center, meet & great begins at 6:30, with the meeting starting at 7pm.
Posted by UpCountry Sportfishing at 9:22 AM