Fished for a few hours Wednesday night with Mandy, first below the Catch & Release (C&R)/TMA, and later in the midsection of the C&R/TMA. Fishing was decent, we picked up a combined total of about 20 fish, and Mandy beat me haha. There were fish rising in late afternoon to tiny Olives, plus a smattering of Isonychia, March Browns, and a few #16 Sulfurs. Water temps near Church Pool were 52 degrees just before dark. 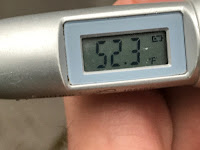 An epic heat wave is moving in (7 days in a row over 90 degrees starting Saturday), and despite the fact that I personally detest hot weather, the Farmington River will stay nice & cold, and actually improve the water temps because they've been running colder than normal. Crazy but true. The constantly changing/variable weather has made it very difficult to pin down hatch times. Plus the same bugs can hatch at different times of the day in different sections of the river, likely due to colder water near the dam and increased water temps downriver. The further you go downstream, the more this river behaves like a freestoner. FYI the water coming out of the dam is still in the mid 40s, and then gradually warms as you move downriver. While this heat wave will shut most freestone rivers down with water temps rising well into the 70s and even 80s, in our case it will bring water temps from the 40s/50s and into the 50s/60s, which should only improve the insect hatches & trout feeding. It will also mean you want to stay at least until dark for the evening fishing (with the exception of Riverton above the Still River, icy water up there means the hatches both start & end earlier than downstream where water temps aren't as cold). 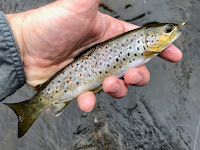 Conditions:
Saturday 6/30/18 7am update:
Water is medium & clear in Riverton at 226cfs, the Still River is coming in at 158cfs (and dropping rapidly), for a total flow in the permanent TMA/Catch & Release (C&R)  of a medium and very fishable 384cfs and dropping. Due to significant rain Wednesday night/Thursday morning, the Still River flow jumped up but already came waaay down. It's been a dry June, glad we finally got some rain (prior to this we were just over 1" total for the month). Water clarity below the Still River is good now with just a light stain (think very weak iced tea). Water temps have been averaging in the 50s in the afternoons lately for most of the river, and Riverton above the Still River has remained colder in the mid 40s. As you move downriver, water temps increase.

Bugs:
#16 Sulfurs (Invaria) are currently a major hatch everywhere, and they are finally starting to pop up in Riverton, and downriver (think Collinsville/Unionville) we are starting to see the smaller/brighter #18-20 Sulfurs (Dorothea) too. Assorted Caddis averaging #16-18 in olive-green & tan are all up and down the river, typically popping in the late morning to early/mid afternoon normally. #10-14 March Browns/Gray Fox are still hatching mid/upper river, still a few Vitreus (Riverton only), and depending where you are, you may see #12-14 Light Cahills, big 8-12 Isonychia ("Iso's"- hatching everywhwere except Riverton), #18-20 Attenuata (a bright green sort of Blue Winged Olive, hatch is still downriver), #8-10 Varia (Yellow Drake), #20-26 Blue Wing Olives (early/late, especially on cloudy days). And small Midges are always present, especially in the icy cold water up near the dam in Riverton.

At moments quite a few trout are holding in only 1-2 feet of choppy water (especially during hatches and/or low light conditions) and sometimes even skinnier water than that, so don't focus only on the deep stuff. Typically when trout are in shallower water, they are there specifically to feed. Plus many bugs like March Browns/Gray Fox, Vitreus, Isonychia and many Caddis species hatch in fast, often shallow water. Spinner falls typically occur over/in riffles and pocket water. Plus fast water is more oxegenated. All reasons you should should not ignore faster water. Personally I've been targetting fast water almost exclusively since early/mid May, and there have been plenty of trout in residence there. In water that's not too deep, dry/dropper with 1-2 weighted nymphs about 2-3 feet under a buoyant, visible dry fly can be very effective, not to mention fun. It also enables you stay back a bit, and gives you the opportunity to catch fish on both nymphs/pupa & dries. Most days they'll take the nymphs, but you will get plenty of bonus trout on the dry.

Subsurface, Sulfur-type nymphs, Caddis Pupa, Pheasant Tails/Frenchies, March Brown nymphs, and small Blue Wing Olive nymphs are taking trout, and big Stonefly nymphs are working (especially early/mid morning). A variety of attractor/hot-spot nymphs have been very effective also, including Antoine's Perdigon series. Catching trout is not always about exactly matching the hatch (sometimes it is though, especially during a hatch when trout are surface feeding), it's about getting a trout's attention and enticing them to eat your fly. The best nymphing has been in medium to fast water with some chop to it- just look for current breaks, seams between fast & slow water, drop-offs and structure. Wet flies & Soft-Hackles have been catching plenty of trout too, we have a good selection of them if you need us to pick you out a couple of winners. Wets are both fun to fish & good fish catchers. They also enable you to efficiently cover a lot of water and search for fish.

When trout aren't rising, the nymphing has been good. If you don't know how to nymph effectively, you really should learn. There are many good books, articles & videos out there. Or better yet, book a day with one of the local guides and have them teach you- there is no faster way to learn. Water temps well into the 50s has pushed many trout into the calf to waist deep riffled water and good catches are being made- ideal scenario for tight-line/Euro/short-line/contact nymphing with a pair of weighted nymphs and/or some split shot to get your flies down.

Streamers:
Try #2-14 patterns, especially in colors like olive, white, black or brown- other colors are good too, and it pays to experiment. Typically the low-light periods of early & late in the day are the optimum times to fish a streamer. During the day, target structure (undercut banks, fallen trees, undercut banks, big boulders, etc.) and shady areas. If you're specifically targetting larger trout, go bigger, but expect to catch less fish. Water temps are mostly in the 50s now (Riverton is mid 40s), which means you can speed up your retrieve. Play around with your presentation & retrieve and see what works. If you listen, the trout will tell you what they want. Think Zonkers, Woolly Buggers, Bruce's Yellow Matuka, Dude Friendly, Ice Picks, Mini Picks, Mop Heads, Slump Busters, Sculpin Helmet patterns (for a weighted sculpin imitation), etc.

If you have some equipment gathering dust in your closet, our shop is "hungry" for trade-ins. We give fair market value toward new equipment in the store..... no waiting for your item to sell, just bring your used fly rods, reels, and fly tying equipment  to us and we will turn it into something shiny and new for the upcoming season. Please call ahead for an appointment.
Posted by UpCountry Sportfishing at 4:05 PM