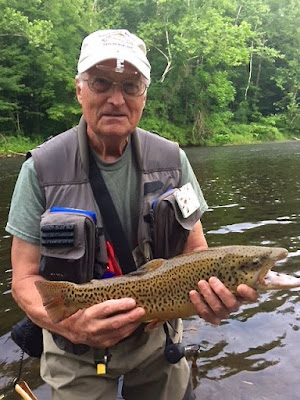 The parade of nice trout continues. Top photo is customer Wendy Neefus with a measured 20" brown, looks like a Two Year Old from earlier this spring. Next pic down is guide Zach St. Amand with a perfect 19" brown he caught while wet wading yesterday morning. Last pic is a 20" 'Bow I landed around dinnertime yesterday.

Interesting outing for me. I started in late afternoon, and there were fish popping on the surface to a variety of bugs. I missed/pricked a good number of fish, but could not seem to solidly hook & land one. And then I hooked the 20 inch rainbow pictured down below, it gave me 3-4 really good jumps before I was able to slide it into my net. She ate a small olive nymph (tied on a short shank #16, so more like a #18 or even smaller). And then not 15 minutes later I hooked a much bigger but unseen fish, which threw my hook after about 5 seconds. One hour plus later, in the same vicinity, I hooked another giant fish, had it on for maybe 10 seconds, it did a toilet bowl swirl on the surface, and again the hook popped out. This one at a small Sulfur nymph, and my hook was slightly bent out. Grrrr.....  Another fisherman witnessed the whole event, he said it was a big brown, easily 5 pounds and possibly in the 2 foot class. Not sure if I hooked the same big fish twice, or if it was 2 different ones. Oh well, better to have loved & lost, right? I prefer loved & landed though, hahah. 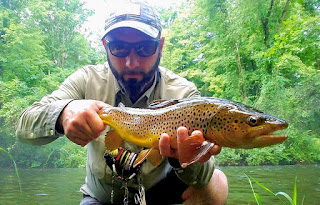 Currently the dam is still pumping out very cold water, I got 54 degrees right below the dam yesterday. The Still River dumps in warm water 2 miles down, and below that the temp reflects the mix of the two different rivers. As of this morning, there is twice as much cold dam water mixing with the warmer Still river flow, so you can fish downstream quite a ways in still be in water that is in the 60s. Personally I'd probably stay from about Church Pool & up. If you start in the early to mid morning, water temps are coolest then, and you can venture downriver further (but not below New Hartford), and I'd work upstream as the day progresses and the temps rise. It really helps to carry a thermometer this time of year, that way you can find optimal water temps & good fishing. FYI in the summertime after a good rain, the warmer Still River water raises the downstream water temps, and as it drops things cool off again. Fortunately the Still drops fast. 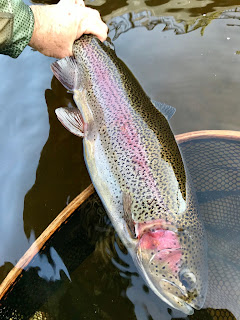 Conditions/Flow:
The total flow in the Catch & Release area through Barkhamsted is medium/normal at 311cfs (204cfs cfs below Goodwin/Hogback Dam in Riverton, plus an additional 107cfs & dropping from the Still River). Water temps right below the dam today is about 54 degrees, and should be low to mid 60s in the permanent TMA/Catch & Release (C&R). The further downstream you go, the warmer the water. Water temps are at their lowest in the early mornings, and at the highest in late afternoon/evening. Hot/sunny days will see the biggest temp increases, cloudy days the least. Colder water below the dam often means the "evening hatch" will start in late afternoon. Further downriver, hatches happen at the more traditional times, with early & late in the day normally being the peak times.

Plenty of bugs hatching, with the caveat that you need to be in the right place at the right time. I get customers coming in the shop in the early afternoon asking me "What's hatching right now?", to which I reply "Nothing"- they look at me like I slapped them. Bugs don't hatch all day, every day, everywhere. It's summertime, and just like on most trout streams in the northeast, early & late is typically the best (with a few exceptions). Midday is the slowest hatchwise, with mornings & late afternoons through evenings seeing various insects (depending upon what section of the river you are located). Mornings bring Winter/Summer Caddis #20-24 in the very early hours. 7am-10am has been seeing Needhami Duns #22-26. Late morning through the evening brings various Caddis #16-20. Isonychia #10-14 are still hatching in the late afternoon and evening. Sulfurs are mostly uprvier now, and I'm not sure exactly where the lower boundary for them is (it keeps moving up), but I'd stay from Campground and up to the dam. They are definitely still hatching quite well all throughout Riverton in the late afternoon. We are seeing mostly the smaller Sulfurs now, averaging a #18- look for them in the evenings, but you may see them as early as late afternoon up closer to the dam. Terrestrials such as ant & beetles have been excellent as well during the day. Other bugs hatching include Light Cahills #12-14 (eves), and small Blue Wing Olives #18-26 (afternoon/eves). Hatch times will vary depending upon time of day, air temps, and how far up or down river you are. Make sure to have more than one size Sulfur, because if they are on the smaller ones, they likely will refuse a #16 (there are still some bigger #16 Sulfurs in Riverton, as well as the smaller #18s). Isonychia live in fast water so look for them there- pool heads, riffles, pocket water & runs, Sulfurs live/hatch in a variety of water types (especially medium-slow to medium fast). You can even blind fish large Isonychia dries and bring fish up to them. Dry/dropper is very effective in the summer here, run one or two small weighted nymphs behind a buoyant visible dry (2-3 feet under your dry if you are searching/blind-casting the water, but only about a foot if fish are actively rising during a hatch). Isonychia nymphs are also very effective- try both dead-drifting & swinging/stripping them. They are excellent/fast swimmers, and sometimes the trout want them moving, and sometimes they don't.

George Daniel Clinics coming this fall at UpCountry- click on the clinic name to take you to link with clinic descriptions/info. Call shop at 860-379-1952 to sign up, cost is $150, paid in advance, nonrefundable. FYI payment in full is required when you sign up, we cannot "hold" a spot for you without payment. The 9/29 Nymphing Workshop is full now, but we have a #2 Nymphing Workshop scheduled for Saturday October 20th, 9am-2pm, plus a 3rd on on Sunday October 21st:
-9/29/18 Nymphing Workshop (full but we have another on 10/20, and 10/21 also)
-9/30/18 Streamer Fishing Workshop

Subsurface, Sulfur-type nymphs, Caddis Pupa, big Stonefly nymphs (especially mornings), Pheasant Tails/Frenchies, #10-12 Isonychia nymphs, and small Blue Wing Olive nymphs are all taking trout at the right moments. A variety of attractor/hot-spot nymphs have been very effective also, including Antoine's Perdigon series. When trout aren't rising, the nymphing has been good. Catching trout is not always about exactly matching the hatch (sometimes it is though, especially during a hatch when trout are surface feeding), it's about getting a trout's attention and enticing them to eat your fly. The best nymphing has been in medium to fast water with some chop to it- just look for current breaks, seams between fast & slow water, drop-offs and structure. Wet flies & Soft-Hackles have been catching plenty of trout too, we have a good selection of them if you need us to pick you out a couple of winners. Wets are both fun to fish & good fish catchers. They also enable you to efficiently cover a lot of water and search for fish. They are most deadly when fish 2 or 3 at a time, with tag end droppers.

Quite a few trout (including some BIG ones) are holding in only 1-2 feet of choppy water lately (especially during hatches and/or low light conditions) and sometimes even skinnier water than that, so don't focus only on the deep stuff. Typically when trout are in shallower water, they are there specifically to feed. Plus many bugs (Isonychia and many Caddis species for example) hatch in fast, often shallow water. Spinner falls typically occur over/in riffles and pocket water. Also, fast water is more oxygenated. All reasons you should should not ignore it. Personally I've been targeting fast water almost exclusively since early/mid May, and there have been plenty of trout in residence there. In water that's not too deep, dry/dropper with 1-2 weighted nymphs about 2-3 feet under a buoyant, visible dry fly can be very effective, not to mention fun. It also enables you stay back a bit, and gives you the opportunity to catch fish on both nymphs/pupa & dries. Most days they'll take the nymphs, but you will get plenty of bonus trout on the dry.
Posted by UpCountry Sportfishing at 9:47 AM