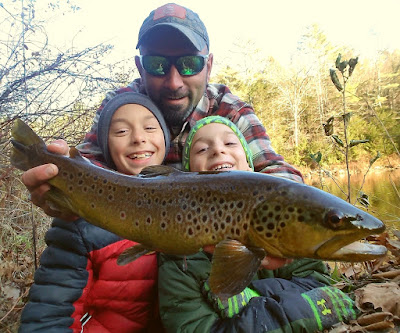 More nice trout were landed over the weekend. Despite colder temps, Saturday seemed to be the better day, but some good ones were landed Sunday too. Egg patterns continue to be hot and seem to be accounting for the majority of the bigger trout you see pictured the past few weeks. Some are also getting caught on streamers & regular nymphs. Water level remains excellent, with medium flows. Weather is kind of all over the map this week. Generally the more pleasant time of day is when the trout bite best, with occasional exceptions. Expect to see Blue Winged Olives around 2pm most days, regardless of if it's sunny or cloudy.

Top pic is Zach St. Amand and his boys, with an awesome 21" brown he sight nymphed. 2nd down is Derrick Kirkpatrick's client Brett with one of five 17" browns he nailed in the first hour of fishing, and below that is Jonhny Stavs with a nice one. Last fish pic is Steve Hogan's client Jim Berry with a nice November brown. 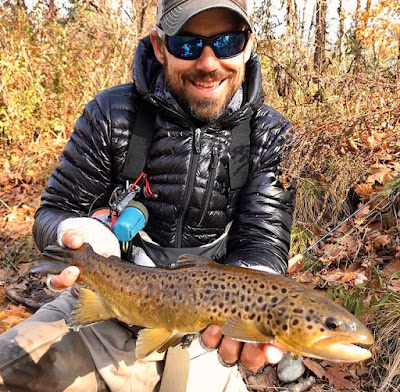 Wise anglers are starting later and focusing on the late morning to late afternoon period when water temps are highest and both the trout & bug activity are at their peak, it's not worth starting at first light this time of year IMHO- I wouldn't start before 9am, and I'd expect later to be better.  If you MUST start mega early, fish flies that are independent of hatching activity: Junk Flies (Eggs, Mops, Squirmies) and streamers, and fish them all slow & deep. Various nymphs & streamers continue to produce, and along with mid-afternoon hatches of small Blue Wing Olives (BWOs), there are a few Tan Caddis (near the end). BWOs will be the dominant afternoon hatch in November and into December.

Thomas & Thomas has debuted their Paradigm series of moderate action, dry fly type rods, along with a new Contact 10' #3, and a Zone 10' #4. We just received samples/demos of the new Contact & Zone 10 footers, and should be getting in Paradigms in 9' #4 & #5 any day now. Zach St. Amand has been beating up the new 10' #3 Contact and loves it so far. Grady & I were impressed with the Paradigms, they are on the moderate action/somewhat softer side, but they cast beautifully from up close to far out and will protect lighter tippet. FYI the Paradigm series won "Best New Dry Fly Rod" in the 2020 Fly Fisherman magazine Gear Guide!  The Contact 10' #3 feels awesome in the hand, and it's a more portable length than it's longer brothers. Due to it being shorter than the 10' 8" & 11' 3" models, it has a crisper action that would make it a very good choice for someone who likes to tight-line/Euro nymph, but also likes to throw fly line with dries, wets, and small/medium streamers. 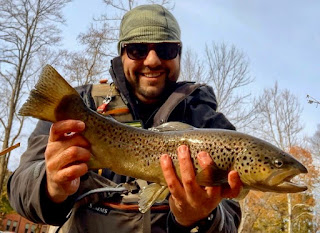 No need to get here at the crack of dawn, wait until late morning/early afternoon when the water temps rise and the trout get more active and you get some insects hatchng. Plus it's a much more comfortable time of day to be out. Junk Flies (eggs, Mops, Squirmies, Green Weenies) remain solid choices, along with streamers. Expect to see some tan Caddis & small Blue Wing Olives in mid/late afternoon- match them with dries if you find risers, or go underneath with the corresponding pupa & nymphs if they aren't rising. The entire river from Riverton to Unionville continues to fish well, so don't limit yourself to just one section or pool, it's literally all good. 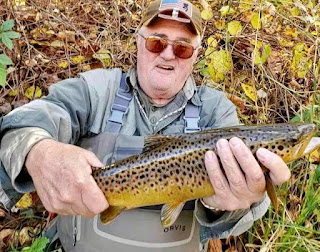 Flows:
Total 8am flow today (Monday) in the permanent Catch & Release was 284cfs (181cfs from the dam, and 103cfs from the Still River). 8am water temp in Riverton was 48 degrees. Lowest water temps will be at first light, highest will be mid/late afternoon. Currently trout are most active when water temps are at their highest and/or moving upward, morning have been very slow.

Successful flies & tactics lately have included quite a variety of patterns: streamers, nymphs, "Junk Flies" (eggs/Mops/worms), dries, and wets/soft hackles. Junk Flies have been working well during non-hatch times & moments when flows bumps up due to rain. Streamers can work anytime of day in the Fall, especially early & late in the day during low light. Trout, especially browns, get extra aggressive toward streamers this time of year. Go with bigger streamers for less but bigger trout, or small to medium for better numbers but smaller trout- 3" long (give or take) would be the in-between size choice for the best of both worlds. Main hatches are Tan Caddis (mostly #16-18) & Blue Wing Olives (averaging #22-24 of late). Overall the best insect activity is in the afternoon to dusk period when air temps are more pleasant. Cold nights mean that early morning can be slow due to big water temp drops overnight, so if you start early try bugs & techniques that are not hatch dependent during that time slot: streamers, or Junk Flies (Mops, Squirmy Worms, and especially Egg Flies). As water temps rise in the afternoons, both bugs & trout get more active. Soft Hackles sometimes work quite well when Caddis are hatching.

Trout are still spawning (FYI it can go as late as early/mid January), so watch out for redds (light colored patches of gravel in riffly areas where the female browns dig a depression in the gravel to lay their eggs). Several points: 1) please leave the spawning trout alone so they can make more wild trout, 2) spawning is very stressful, so don't add to their stress by catching them, and 3) don't walk on the redds or you will crush the eggs and kill them- some eggs end up in the light colored redd, but many end up slightly below them, maybe 3-10 feet or so. Fish in the darker/deeper water downstream of the redds and there will likely be hungry, egg-eating non-spawning trout there . An egg fly can be absolutely lethal as they are a calorie-dense high-value food item for trout, they cannot escape/swim away, and bigger trout love them.

We now have Fasna F-415 Jig hooks in stock in sizes #14-20. They are high quality, stronger than average, come 30 to a pack, and similar in shape/design to the ever popular Hanak 450 (which is wide gap/short shank/curled in point). They run about a size smaller than marked compared to the Hanak 450 (i.e. the #16 is more like a #18, and so on)- compared to a standard jig hook they are a full two sizes smaller. Check 'em out if you are looking for a smaller jig hook with a wide gap, shorter shank with a turned in barbless point. These hooks won't bend out when you are playing a bigger trout- many comp style hooks are medium wire, and when you combine that with a wide hook gap (especially on the smaller hook sizes) and a big trout, the result can be a lost fish when the hook bends.

Cortland's "Top Secret" Ultra Premium Fluorocarbon tippet has a glass-smooth Plasma finish and is by far the best and strongest stuff out there: it has the most abrasion resistance, stretch, flexibility & clarity. Total game-changer, and an extra-good choice if you like to nymph with lighter tippets - here's a link to purchase it off our site: http://www.farmingtonriver.com/cortland-top-secret-ultra-premium-fluorocarbon/
Posted by UpCountry Sportfishing at 10:34 AM