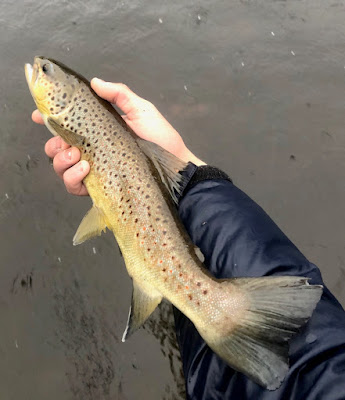 We will be closed on Thanksgving this Thursday 11/28, but open normal hours every other day.

Looks like some very mild weather through mid-week, then highs drop down into the 30s by the weekend. As of this morning, the river is high & dropping (upper 700cfs range at 8am). We definitely got more rain than predicted yesterday, but we should drop back down quickly. All the extra water is coming from the Still River, and she drops fast. You always have the option of going upstream of the Still in the upper 2 miles below the dam, its almost unaffected by rain in that section due to the controlled dam release. Personally I love fishing in higher flows, as long as it's not muddy (and it's not). I tend to catch some bigger fish when the flow comes up. When fishing in higher flows you can use bigger flies & heavier tippet. It's a great time to throw a big streamer in search of a big trout, they come out to feed in higher flows and are more prone to making a bad decision on what to eat. Nymphwise, think Junk Flies for sure: Egg flies, Squirmy Worms, and Mops. Also big Stonefly nymphs. High water makes it easy to find the fish: out of the heavy current. They tend to move in closer to the banks.

Top pic is a brown with a big motor (tail) that Justin Barden tricked on a streamer Sunday, and below that is his buddy Paul Battaglia with a nice brown he nymphed up. 3rd pic down is a late season Atlantic Salmon Parr (notice heavily forked tail). 4th pic down is the view behind UpCountry this morning. 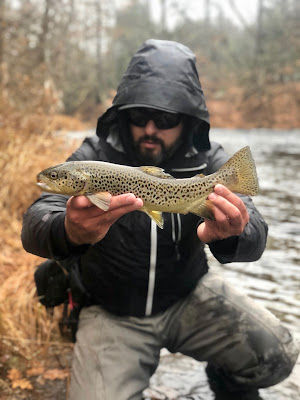 Hatches include Winter/Summer Caddis, Midges, and small Olives. Lately the Winter Caddis & Midges have been better hatch than the Olives FYI. The higher flows will reduce the dry fly fishing, I'd check Church Pool for risers. Other than the early/mid morning Winter Caddis, the other bugs are afternoon deals. Generally afternoons have provided the better fishing (higher water temps = more active trout & bugs). The most consistent action, and especially for bigger fish, has been subsurface with nymphs & streamers. Good nymphs include Junk Flies (eggs, worms, mops), Stones, Caddis larva, Midges & Olive nymphs. With nymphs, Junk Flies have dominated the earlier part of the day, and generally nymphs that imitate bugs have been better in the afternoons. Makes sense, as that's when most of the real insects are active. With streamers, experiment with colors & retrieves, and make sure to get them deep. 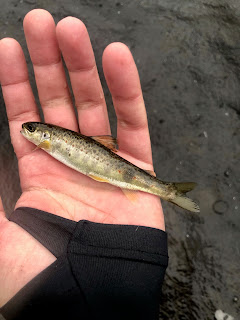 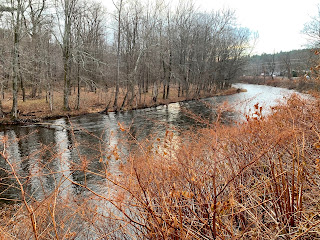 Junk Flies (Eggs, Mops, Squirmies) are still top producers almost anytime of day, especially when nothing is going on (they are independent of hatching insects. Midges and small Blue Wing Olives (BWOs) #22-26 and Midges are the main afternoon hatches now. Before & during the afternoon BWO hatch, the nymphs that imitate them can be very effective- usually something with a mayfly shape in olive to brown in #18-20 will get the job done, even though the adults are smaller than that. The entire river from Riverton to Unionville continues to fish well, so don't limit yourself to just one section or pool, it's literally all good.

Flows:
Total 8am flow today (Monay) in the permanent Catch & Release is high & dropping at 779cfs (272cfs from the dam, and 507cfs from the Still River).  Flows are dropping fast, and even though 779cfs is high, it's fishable for sure with bigger nymphs, Junk Flies, and streamers. 8am water temp in Riverton was 42.5 degrees. Lowest water temps will be at first light, highest will be mid/late afternoon. Currently trout are most active when water temps are at their highest and/or moving upward, the early to mid morning period has typically bee slow, fishing picks up as the day progresses and water temps rise.