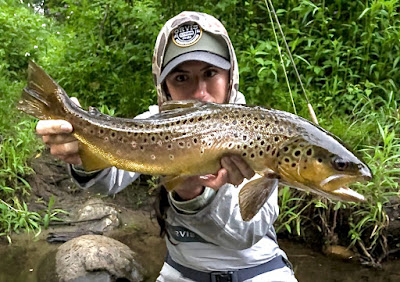 The bug activity of late has better fish on the feed, both on top & subsurface. Waaaay too many fish pics from customers to post on here, so I just picked out a few. Alexis Williams is up top with another big brown, this one on a dry. Mike Andrews below that doing what he does best with a big holdover brown laid on his blue net. Our own Joey Takeman is third with a wild beauty on an Isonychia dry laid on his big Fishpond El Jefe net, and fourth down is Jason Grieco with a long holdover dry fly brown. 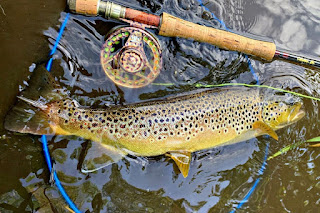 We have some availability for our awesome upstairs apartment rental- go to our Lodging page to check if it’s available. Great place to stay riverside, completely furnished with a kitchen, big flat screen TV, and a deck that gives you a view of the river out back. All that and very reasonably priced.

Looks like some pretty warm weather for this weekend (mid/upper 80s),and no rain- flows are great and in the mid 300cfs range in the permanent TMA/Catch & Release (C&R). Fishing has been good, with plenty of bug activity to create some surface activity and also get them feeding subsurface on nymphs. Sulfurs remain the #1 hatch, but there are other bugs too. It pay to know your bugs, their habitat, and their hatching behavior. What you see for bugs and when they hatch will totally depend upon the time of day and how far below the dam you are. Sulfurs & Caddis are all up and down the river, there are Attenuata up to at least the upper permanent C&R, and from Canton & downriver (Collinsville, Unionville & downstream) there are big Isonychia- FYI Iso’s typically don’t make it as a legit hatch in the permanent TMA/C&R until July. If you are on the water during bug activity, expect to see some risers if you look around. Remember that many bugs ONLY hatch in water with some good current. Big Stoneflies & March Browns live in fast water broken with rocks (pocket water), and most Caddis hatch & egg-lay in faster water. Sulfurs like medium-slow to medium-fast water. Mayfly spinners usually do their thing over riffles.

The hotter weather this weekend may make the evening hatches start later, so stay until full darkness if you can! 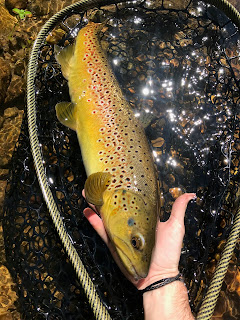 Attenuata have joined the fray recently on most of the river-they often get mistaken by anglers for a small Sulfur- but they are NOT. Size is #18-20, and the winged dun pops out of the nymphal shuck on the stream bottom, and then rises/swims to the surface (like the Quill Gordons & Vitreus). The color upon first emerging is a bright greenish yellow, sort of an apple green- and yes, we have the matching dun pattern that Don Butler ties for us. I’ve been seeing them pop in the gentle riffles in New Hartford around 7pm’ish, about the same time I’m seeing the #16 Invaria Sulfurs. We’re also seeing an afternoon hatch of the Sulfurs in the afternoons sometime between 1pm and 5pm in the middle to upper river. Still a few evening Vitreus averaging #14 in the mid to upper river too, they tend to emerge in faster water/riffles, that hatch is near the end though. And at dusk there are #16 Sulfur spinners & #10-14 March Brown/Gray Fox spinners. Both will fall over the riffles and drift down into the pools, helpless & spent on the water. The March Browns in particular will often fall over heavier pocket water. They typically sporadically emerge in faster water, along the edges, from late afternoon through eves.

Various assorted Caddis (#12-22, averaging #14-18) remain a staple bug, with the pupa consistently producing subsurface- the adults come back in the evenings to egg-lay in faster water. Tans & olive/green are common colors, but also gray, brown & black. Keep your eyes out for spinner falls of Sulfurs & March Browns in the eves as this can bring some large trout to the surface. Caddis are a possibility at any time. They tend to hatch here in the mornings/afternoons in riffles & faster water, and then come back at dusk and egg-lay/dive in the riffles & faster water. A Caddis pupa is a great choice for nymphing any time of day, but especially during emerge, and even during egg-laying, just be sure to let them swing out a the end of each drift. Large Stoneflies averaging #6-10 are starting to emerge/crawl out in the early to mid mornings now- you will see their empty shucks on the rocks in the fast water. That is also the water type you want to focus on when nymphing imitations of them in the mornings-this can produce some BIG fish. Pair them up with a Caddis Pupa or a smaller Pheasant Tail/Frenchy/Mayfly nymph. 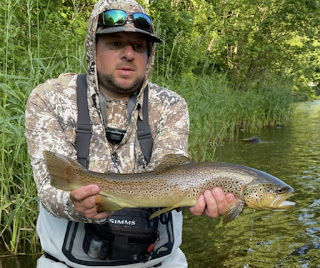 Terrestrials such as regular Ants & Beetles are both good options this time of year during non-hatch times as the milder weather has them active. If it ain’t happening on the surface, the nymph fishing underneath has been good. Imitations of all the bugs mentioned above are good choices. And if you are out in early to mid morning, try a big Stonefly nymph #6-10, as they are active and hatching/crawling out on the rocks now.

Tip: this is a great time of year to fish wet flies & soft hackles. Fish them 2-3 at a time, on short tag end droppers, spaced 20-30” apart. Use 3x-5x fluoro tippet (depending upon fly size), and keep your rod tip up. The elevated rod tip prevents break-offs, gives you strike detection (watch the bow and look for changes), helps to better animate the flies, and allows a better hook-up percentage (creates just enough slack to allow the trout to suck your fly into their mouth). Riffly water 3 feet and shallower is prime for this, but it can catch trout on a variety of water types.

Flow:
The Farmington is medium and about perfect at a total flow of 354cfs this morning in the permanent TMA/Catch & Release (C&R). It’s 310cfs below the dam in Riverton, and the Still River is adding in 47cfs – it dumps in a little below the Rt 20 bridge in Riverton. The Still River currently runs warmer (60s) than the water from the dam (upper 40s) this time of year, and so right now it has a positive affect on water temps (raises them well into the optimum range in the 50s). The East Branch is releasing no water last I knew- it comes in about 3/8 of a mile below UpCountry. Unionville USGS gauge is a vary fishable/wadeable 404cfs this morning- medium & very nice. Riverton water temp was 49 degrees at 8am, yesterday afternoon it reached 52 degrees at the Riverton gauge (water temps are higher downriver, and can reach mid/upper 50s currently, low 60s in Collinsville/Unionville during hot sunny afternoons).

Posted by UpCountry Sportfishing at 11:18 AM