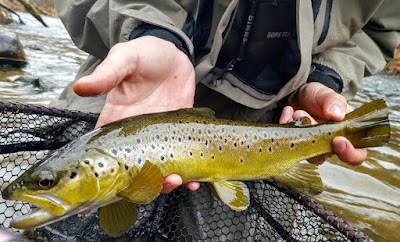 Absolutley flawless brown by Wade Schools this week, looks like it could be a wild fish to me- a holdover at the very least. The spring-like conditions continue straight through the weekend, and anglers are enjoying this unusually mild weather- high of 50 today, 59 for Sunday! Water level is normal for this time of year- total flow in permanent Catch & Release area is a medium level of 279cfs (131cfs from dam in Riverton, 148cfs from the Still River). Plenty of good reports in December, especially from those who know how to nymph and cover lots of water. Dries & streamers have also been very effective at moments, cooler nights starting Sunday/Monday should increase the morning Winter Caddis hatch. Change spots and/or techniques if you are not catching trout, experimentation & covering water are keys to success right now. Move around until you find some willing fish. Fish are still scattered all over the river and not all stacked up in the usual slower water winter lies they they migrate into when water temps are in the 30's. I'm finding trout in medium-slow to medium-fast water in pool heads, deeper riffles, deeper runs, and softer/deeper pockets. Daily water temps will vary depending upon distance from dam, sunshine, daily high, and daily low- they've been averaging in the low/mid 40's. Normally water temps would be in the 30's in an average December. Eventually when temps go into the 30's and stay there (probably not until sometime later in January!), you will see most trout migrate into the slower/deeper pools & softer runs. Most browns are post-spawn right now and as such are feeding, but moving around too, so cover lots of water to find fish.

Fish are rising in the mornings to Winter Caddis #20-24, in the afternoons Midges #22-32 are hatching, and  there are still a few small Blue Wing Olives #22-28 (light hatch. almost over) on milder days -Midges & Winter Caddis will hatch straight through the winter. Ironically, when winter weather normalizes and gets colder, the morning Winter Caddis hatches get heavier. If you are nymphing in the early to mid mornings, try egg patterns, Squirmy Worms & big stoneflies, and pair those up with a smaller nymph in the #16-20 range. Streamers are another good choice in the mornings, but fish them slow & deep, don't rip them in fast like you would in May or October as water temps are colder now and trout are more lethargic, make it easy for them to "catch" your fly. If your primary goal is numbers, go with medium sizes (#6-8), or go bigger if you want a crack at the biggest trout, but are willing to catch less and forgo some of the average fish. Assorted smaller nymphs in the #16-20 range are some of the more consistent fish catchers right now- try Flashback WD-40's, Zebra Midges (black, olive, red), and Pheasant Tails. Caddis Larva in #14-16 too, there are TONS in the river. Also try attractor nymphs in #12-18 (Prince, Rainbow Warrior, Yellow Sparkle Prince, Lightning Bug, etc.).

Other suggested flies include the following nymphs: Yellow Stoneflies #8-16, Black Stoneflies 8-14, Fox Squirrel Nymph #12, Hot Spot Baetis #16-20, Olive nymphs #16-22, Rainbow Warrior #16-18, Tan Caddis Pupa #14-16, Green/Olive Caddis Larva #14-16, Pheasant Tails #16-22, Prince Nymph #12-18. Play with colors on your streamers, lately some of the better ones have been white, olive, and brown. Nothing lighter than 2-3x on your streamers (for average sizes streamers), and go heavier if you are tossing big ones. 5x fluoro is a good average for your nymphs, and 6x-7x tippet for your dries (depending upon size). Long tippets help with both dries & nymphs: it will give you "S" curves to get a drag-free float with dries, and it will sink faster with less weight when nymphing.

Our apartment is now closed for the season, and will be available again starting in April 1, 2016.
Posted by UpCountry Sportfishing at 8:54 AM