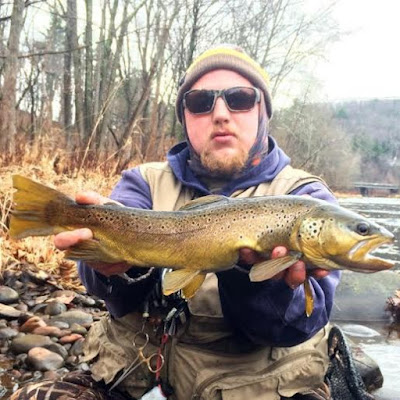 Some really nice browns keep showing up regularly- check out this beauty caught Sunday by Mike Andrews, a recent convert to Euro Nymphing. The adipose fin clip shows it was stocked as a Survivor Strain Two Year Old, and it evidently held over and got even bigger. Water level is in the normal range for this time of year- total flow in permanent Catch & Release area is a medium 247cfs (125cfs from dam in Riverton, 122cfs from the Still River). We are starting to see some winter weather after the mildest December I can remember. Long Range Forecast calls for highs in the 30's-40's, lows mostly in the 20's. This will have several effects. First there will be less anglers. Second, cooler, normal winter nights means that the Winter Caddis hatch will get heavier, the mild temps had it lighter than usual. Thirdly, trout will start to transition into their typical winter lies- this means slow to moderate speed water with some depth. Once they move, they will often pod up, so where you find one, there may be a bunch more At the moment they are still scattered all over the place because water temps have been well into the 40's, we've been catching them in the medium-slow to medium fast water. Over the next week or so as water temps decrease into the 30's they will start to move into the pools and softer/deeper runs, so look for them there. Nymph slow & deep and expect strikes to be subtle. Get your streamers well down into the water (using weighted flies, split shot, sinking leaders, or sink-tips/sinking lines) column and don't fast strip them, but rather swing, twitch, and slow retrieve them. Due to the slower water you will be fishing & less aggressive presentations, don't use to much weight or too fast sinking of a line or you will hang up on the bottom a lot. Slow streamer presentations mean that you fly will fish deeper than normal. If you fish a weighted fly on a 200 grain line, you will have to fish it way too fast to keep it from snagging. Winter trout like their streamers slow, deep & easy to catch.

Our apartment is now closed for the season, and will be available again starting in April 1, 2016.
Posted by UpCountry Sportfishing at 9:11 AM