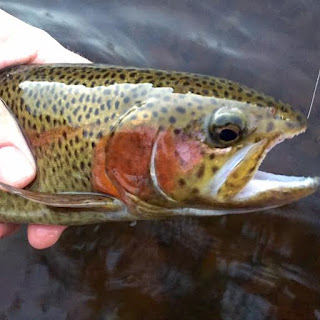 Some very colorful rainbows are showing up lately. Fishing remains above average, with long range weather reports calling for continued mild temps- mid/upper 50's for Thursday through Monday, and every day will be at least into the mid/upper 40's, wow! MDC reduced release from the dam in Riverton by about 60cfs yesterday afternoon, bringing total flow down to 234cfs this morning, a very nice medium-low level for fishing & wading.  Good fishing reports keep rolling in lately, with fish coming to nymphs, streamers & dries. Quite a few 16-18" fish reported by anglers, with some up to 20 inches.  Nymphers are catching the most and having the more consistent action (no surprise there), however dries & streamers have both been very effective at moments.  Mild weather combined with nice flows are driving some above average December fishing by warming the cold water up a bit and creating some bug action/feeding activity. Look for water temps from upper 30's to mid 40's, depending upon the actual day, time of day, and distance from dam. Fish are rising in the mornings to Winter Caddis #20-24, and in the afternoons to small Blue Wing Olives #22-28, and Midges #22-32 - these insects will continue be the main hatches through December. You may still see a few #16-18 Tan Caddis on milder days as well as some random larger mayflies. Other than the Winter Caddis hatching in the AM, overall the bug activity is primarily in the afternoons, so if you start early try flies/techniques that are independent of insect hatches such as nymphing with egg patterns, Squirmy Worms & big stoneflies. Streamers are another good choice but fish them slow & deep, don't rip them in fast like you would in May or October as water temps are colder now and trout are more lethargic, make it easy for them to "catch" your fly. If your primary goal is numbers, go with medium sizes (#6-8), or go bigger if you want a crack at the biggest trout, but are willing to catch less and forgo some of the small to medium fish.  Assorted smaller nymphs in the #16-20 range are some of the more consistent fish catchers right now- try Flashback WD-40's, Zebra Midges (black, olive), and Pheasant Tails. Caddis Larva in #14-16 too, there are TONS in the river. Also try attractor nymphs in #12-18.

Our apartment is now closed for the season, and will be available again starting in April 1 2016.
Posted by UpCountry Sportfishing at 8:48 AM