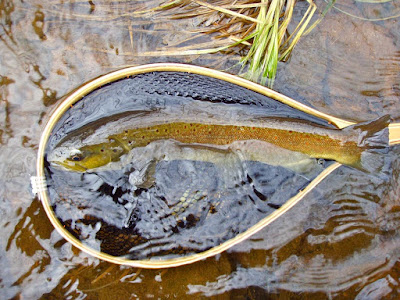 Healthy brown landed yesterday by guide Mark Swenson, big enough to go past his 16" net opening. Geez, is it December or October? Highs in the upper 50's the past couple days, nights in the 40's, and temps will stay like that through this week, with Sunday hitting 63 degrees, wow! Water temps were in the mid 40's yesterday afternoon. Flow is a medium-low 221cfs total in the permanent Catch & Release area (179cfs from the dam in Riverton). Winter Caddis excepted, normally you want to focus on the late morning through mid-afternoon period December through March, but with these air & water temps, the fishing the past 2 days has surprising been best in the early to mid morning, even subsurface. Interesting. Nights have been in the 40's, so the water is hardly cooling off at all overnight. Good fishing reports keep rolling in over the past week, with fish coming to nymphs, streamers & dries. Quite a few 16-18" fish reported by anglers, with some up to 20 inches.  Nymphers are catching the most and having the more consistent action (no surprise there), however dries & streamers have both been very effective at moments. Mild weather combined with nice flows has been driving some above average December fishing by warming the cold water up and speeding up the trouts' metabolisms.

Fish are rising in the mornings to Winter Caddis #20-24, and in the afternoons to small Blue Wing Olives #22-28 (light hatch), and Midges #22-32 - these insects will continue be the main hatches through December, with the Olives tailing off. If you are nymphing in the early to mid monrings, try egg patterns, Squirmy Worms & big stoneflies. Streamers are another good choice in the mornings, but fish them slow & deep, don't rip them in fast like you would in May or October as water temps are colder now and trout are more lethargic, make it easy for them to "catch" your fly. If your primary goal is numbers, go with medium sizes (#6-8), or go bigger if you want a crack at the biggest trout, but are willing to catch less and forgo some of the small to medium fish.  Assorted smaller nymphs in the #16-20 range are some of the more consistent fish catchers right now- try Flashback WD-40's, Zebra Midges (black, olive, red), and Pheasant Tails. Caddis Larva in #14-16 too, there are TONS in the river. Also try attractor nymphs in #12-18 (Prince, Rainbow Warrior, Yellow Sparkle Prince, Lightning Bug, etc.). 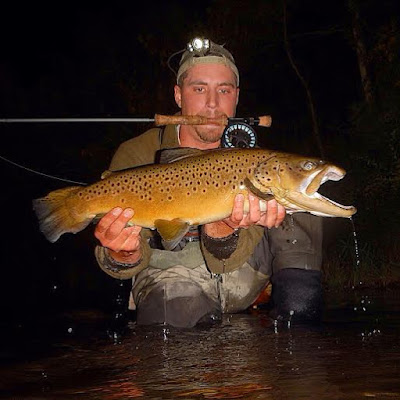 24" Farmington nighttime streamer caught brown, by DEEP Brian this fall. Judging by the tail I'd say it looks like a big breeder from this spring that managed to elude the catch & kill crowd. Well done Brian.
Posted by UpCountry Sportfishing at 8:46 AM