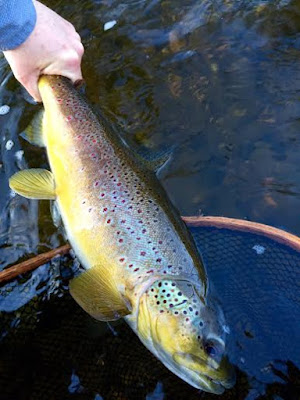 Had some awesome days recently while trying out the amazing brand-new premium Douglas Outdoors Sky 11' #3 rod, one culminated with me back-to-back landing two 20" browns on it, one wild & one holdover. Pictured is the wild one, she was perfect! Caught them both in the span of 3 casts. The other was an adipose clipped Two Year Old that probably was a one season holdover. Hendrickson hatch is moving upstream, it's heavy as far up as Pipeline/Lyman Rock, and a few Hendricksons were spotted in Riverton over the weekend- should see a hatch develop up there later this week. Saturday they were reported hatching downstream in Satan's Kingdom, but not as far down as Unionville. As the week goes on, if you are chasing the hatch I'd stay from the permanent Catch & Release section and upstream, as the hatch will dwindle downstream and keep moving upstream. Spinner falls go close to a week beyond the hatch, and they typically fall in the evening according to the books, but they can also fall in the mid/late mornings, and sometimes evening during the afternoon hatch. For the spinners, you need mild temps with no rain and not much wind, otherwise they go back into the trees. But when it happens, it brings some true pigs to the surface. Also hatching in the afternoons are #18 Mahogany Duns /Blue Quills, #16-18 Blue Wing Olives (a few), and Black  Midges #22-32. Starting to see some smaller Caddis mixing in at moments, not sure on the exact species. Caddis typically emerge in the AM (fish pupa), and egg-lay in the evenings (that's why you will often see them flying upstream).

The Farmington is currently a medium-low total flow of 229cfs in the permanent Catch & Release area- this is a very wadeable level, and great for dry fly & wet fly fishing. The entire river outside of the Catch & Release section has been stocked multiple times in March & April. Don't limit yourself to only the more popular sections of the river, as there is literally excellent fishing all over it. The permanent C&R section is slated to be stocked sometime this week, including the large Farmingtion River Survivor Strain Two Year Olds that typically are obese and average 14-18", with a few even bigger.

Nymphing has been a very consistent way to catch trout early in the season on the Farmington, and some truly large fish are getting caught on them. It's how I (Torrey) personally catch most of my bigger trout.  Underneath the water use Hendrickson Nymphs #12-14, Hendrickson Soft-Hackles, Olive/green Caddis larva #14-16, Prince Nymphs #12-16, Quasimodo Pheasant Tails #12-18, Strolis Dark Brown Quill Jigs #10-14, Strolis Rock Candy (olive, green) 10-12, Black Stoneflies #12-16, Golden Stoneflies #8-12, Zebra Midges #18-20, and Hot Spot Nymphs #12-16.
Posted by UpCountry Sportfishing at 9:28 AM