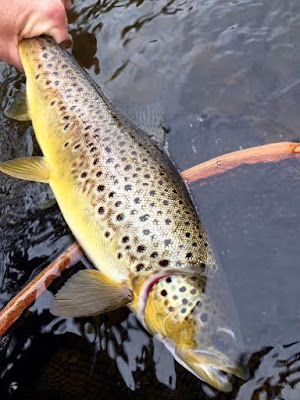 Fished hard the past two days, caught a veritable pile of rainbows, they are now literally everywhere- upriver, downriver, and in the C&R section. Pictured is a nice brown I managed to sneak out from among all the 'Bows. The big news this week is that they stocked the permanent C&R section (TMA) with Yearlings/Adults earlier this week, and 1,000 of the large Two Year Old Farmington River Survivor Strain brown trout are going in today, Friday 4/29. The Two Year Olds have a clipped adipose and a chartreuse elastomer tag behind their left eye, and they normally average 14-18" are are unusually fat when stocked. The adults/yearlings are right eye red for 2016, they DO NOT have a clipped adipose, and they will typically run 6-12". Some of these will hold over and become, big beautiful trout, so don't complain while you are catching 6-8" browns, they are future trophies. Total flow in the permanent C&R is 219cfs (145cfs from dam in Riverton, 74cfs from the Still River). Hendrickson's are still hatching, albeit getting lighter in C&R section. They are up into Riverton now, so your safest bet to catch the best afternoon hatch my be to fish from the upper C&R (Campground) to Beaver Pool or so. I personally saw a moderate hatch of Hendricksons at 3pm Thursday afternon in New Hartford, and there were plenty of trout working the surface. Spinners will continue to fall in the C&R when conditions are right (mild, not too windy, no rain). Traditionally the books say it's an evening event, but I've seen them fall lately in mid/late morning, and even overlap with the hatch. Even in sections where the Hendrickson hatch has ended, the spinners usually go about a week beyond.

Also hatching in the afternoons are #18 Mahogany Duns /Blue Quills, #16-18 Blue Wing Olives (a few), and Black  Midges #22-32. Starting to see some Caddis mixing in at moments, not sure on the exact species, I haven't been able to grab one in my hand yet. Tan Caddis are the next big hatch after the Hendricksons, they typically emerge in the AM (fish pupa), and egg-lay in the evenings (that's why you will often see them flying upstream). You should see a full-blown Caddis hatch first downriver (Collinsville/Unionville), and then it moves up to the C&R in a week or less.

The entire river outside of the Catch & Release section has been stocked multiple times in March & April. Don't limit yourself to only the more popular sections of the river, as there is literally excellent fishing all over it. The rainbows have totally scattered throughout the entire river, even in areas where they didn't stock them, many are 14-16", with a few even bigger.

Nymphing has been a very consistent way to catch trout early in the season on the Farmington when they aren't rising, and some truly large fish are getting caught on them. It's how I (Torrey) personally catch most of my bigger trout.  Underneath the water use Hendrickson Nymphs #12-14 (in the afternoons when the Henny nymphs are active), Hendrickson Soft-Hackles #12-14, Olive/green Caddis larva #14-16, Caddis Pupa #14-16 (tan, brown, olive/green), Prince Nymphs #12-16, Quasimodo Pheasant Tails #12-18, Strolis Dark Brown Quill Jigs #10-14, Strolis Rock Candy (olive, green) 10-12, Black Stoneflies #12-16, Golden Stoneflies #8-12, Zebra Midges #18-20, and Hot Spot Nymphs #12-18.
Posted by UpCountry Sportfishing at 10:03 AM