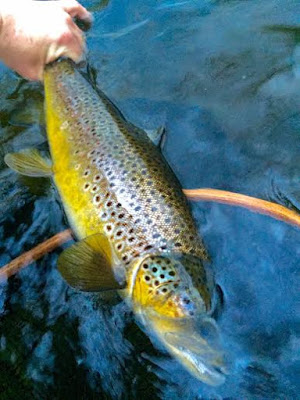 Absolutely perfect specimen of a big wild Farmington River brown trout I caught after work recently, they don't get much nicer looking than that. Lately the rainbows have spread out everywhere, to the point I'm having a harder time getting into the better browns when nymphing because the 'bows are so much more aggressive and usually pounce on your fly first. Not a bad problem to have I guess, catching a pile of rainbows, haha. Flow is a very angler-friendly, with a total of 232cfs in the permanent C&R section (New Harford/Pleasant Valley), with 145cfs from the dam in Riverton, and 87cfs from the Still River. Water temps are averaging low 50's. Most fishing reports of late have been good to excellent, with quite a few anglers landing larger trout. Move around if you aren't doing well, the trout are all over. Also play around with techniques, because dries, wets/soft-hackles, nymphs & streamers are all catching at moments.


The state stocked the permanent C&R section (TMA) with 5,000 Yearlings/Adults last week, plus 1,000 large Two Year Old Farmington River Survivor Strain brown trout (those have a clipped adipose and a chartreuse elastomer tag behind their left eye, and they normally average 14-18" are are unusually fat when stocked). The adults/yearlings are right eye red for 2016, and they will typically run 6-12". Some of these will hold over and become, big beautiful trout, so don't complain while you are catching 6-8" Yearling Survivor Strain browns, they are future trophies with fantastic genetics and will be extra pretty when they grow to a larger size. Weighted Woolly Buggers in colors like black, olive or white are typically very effective on the Two Year Olds for the first 2-3 weeks, then they wise up a bit . Swinging wets & soft-hackles has been very effective lately, both on the fresh stockers, AND on the holdovers & wilds.

Also hatching in the afternoons are #18 Mahogany Duns /Blue Quills, #16-18 Blue Wing Olives (a few, but heavier on crappy, wet, cloudy days), and Black  Midges #22-32. Starting to see some Caddis mixing in at moments, not sure on the exact species, I haven't been able to grab one in my hand yet. Tan Caddis are the next big hatch after the Hendricksons, they typically emerge in the AM (fish pupa), and egg-lay in the evenings (that's why you will often see them flying upstream). You should see a full-blown Caddis hatch first downriver (Collinsville/Unionville), and then it moves up to the C&R in a week or less.