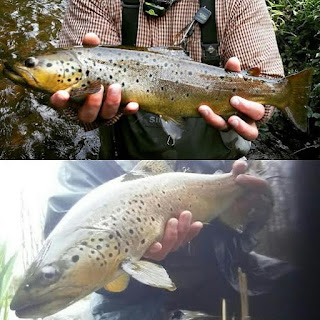 Catch & Release works: pictured is the same trout 1 year part. Upper pic taped at 20", and caught again in lower pic this week by guide Zach St. Amand, longer & fatter now, in the exact same spot. The good fishing reports continue, and with the permanent Catch & Release section stocked with 6,000 trout last week (including 1,000 large Two Year Old Survivor Strain Farmington River Brown Trout), as you might imagine its been fast & furious there at moments. Flow is a very nice & moderate 277cfs in the permanent C&R section (New Harford/Pleasant Valley), with 129cfs from the dam in Riverton, and 148cfs from the Still River. Water temps are averaging low 50's. Many anglers are doing well lately, with quite a few landing larger trout- both recently stocked and holdovers. Move around if you aren't doing well, the trout are all over. Also play around with techniques, because dries, wets/soft-hackles, nymphs & streamers are all catching at moments. Hendricksons are still hatching to some degree in C&R section, the hatch just won't end this year! Most days they come off around 3pm. I'd still say your safest bet is more upriver, as in upper end of C&R (Campground section) up to the dam. Some spring Caddis are mixing in, but not enough yet to call it a real hatch. However, pupa have been working underneath for the past 2 weeks.

Also hatching in the afternoons are #18 Mahogany Duns /Blue Quills, #18 Blue Wing Olives (a few, but heavier on crappy, wet, cloudy days), and Black  Midges #22-32. Starting to see some Caddis mixing in at moments, not sure on the exact species, I haven't been able to grab one in my hand yet. Tan Caddis are the next big hatch after the Hendricksons, they typically emerge in the AM (fish pupa), and egg-lay in the evenings (that's why you will often see them flying upstream). You should see a full-blown Caddis hatch first downriver (Collinsville/Unionville), and then it moves up to the C&R in a week or less.