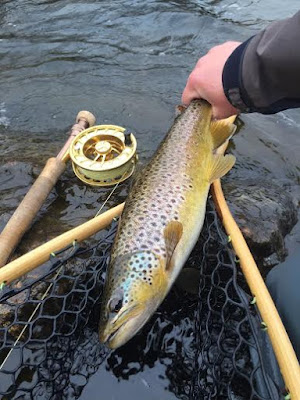 Picture-perfect brown by customer Sam Morse this past weekend, fishing was pretty darn good. After a week of rain, we're finally getting some beautiful weather, with sunshine and highs in the 60's-70's. Hendricksons are STILL hatching, they were downriver as far as Satan's Kingdown as of last Friday 5//6, but your safest bet to catch that mid to late afternoon hatch this week is to head upriver, I would stay between Campround and the dam in Riverton, with the upper 2 miles above the Still River your safest bet. You will see spinner falls farther downriver though, they go an easy week beyond the hatch, but you need nice conditions for a spinner fall- mild (60+ degrees), not windy, and no rain. Leaves are starting to pop now, so the spring Caddis hatches cannot be far behind. Flow is a moderate 271cfs in the permanent C&R section (New Harford/Pleasant Valley), with 127cfs from the dam in Riverton, and 144cfs from the Still River. Water temps are averaging low 50's (colder in Riverton near the dam).

Fishing remains good to excellent, and with the permanent Catch & Release section stocked with 6,000 trout recently (including 1,000 large Two Year Old Survivor Strain Farmington River Brown Trout), as you might imagine its been fast & furious there at moments. Many anglers are doing well lately, with quite a few landing larger trout- both recently stocked and holdovers. Move around if you aren't doing well, the trout are all over. Also play around with techniques, because dries, wets/soft-hackles, nymphs & streamers are all catching at moments.

Also hatching in the afternoons are #18 Mahogany Duns /Blue Quills (getting lighter now), #18 Blue Wing Olives (a few, but heavier on crappy, wet, cloudy days), and Black  Midges #22-32. Starting to see a few Caddis mixing in at moments, not sure on the exact species, I haven't been able to grab one in my hand yet. Tan Caddis #16-18 are the next big hatch after the Hendricksons, they typically emerge in the AM (fish pupa), and egg-lay in the evenings (that's why you will often see them flying upstream). You will see a full-blown Caddis hatch first downriver (Collinsville/Unionville), and then it moves up to the C&R.

The entire river outside of the Catch & Release section has been stocked multiple times over the past 2+ months. Don't limit yourself to only the more popular sections of the river, as there is literally excellent fishing all over it, and it gets you away from the crowds. I spend a lot of time in the open water, because I like a little elbow room. And FYI, in an average year both my biggest brown & rainbow usually come from OUTSIDE the permanent C&R section. The 2 fish, 12" restriction seems to keep a lot more trout in the river, and you would be surprised at the amount of holdover and wild fish that elude the catch & kill crowd. Recently the rainbows have totally scattered throughout the entire river, even in areas where they didn't stock them, many are 14-16", with a few even bigger, including the occasional monster broodstock fish in the 6-8# plus range.