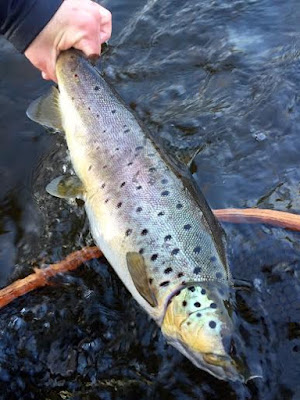 I fished Wednesday, and after a slow start in the morning, things really picked up in the afternoon as the water temps rose (went from low 40's in AM to upper 40's by late afternoon) and the Hendrickson hatch got going at about 2:30pm. First I had to catch a bunch of recent stockers in the run I was in (poor me, haha), but at day's end I was able to finally pull this perfect brown out of a spot that the catch & kill crew hits hard. I also caught an even bigger rainbow a couple of casts before it, in the exact same lie. Hendrickson hatch is officially going in the Catch & Release section now, this should be a good weekend to catch the hatch, and I imagine that with highs in the 60's we may even start seeing a spinner fall. The Farmington is currently an excellent & clear total flow of 297cfs in the permanent Catch & Release area (159cfs from the dam in Riverton, 138cfs from the Still River). FYI our apartment has become available for rent tonight (Friday) and Saturday night. Also hatching are #18 Mahogany Duns (aka Paraleps/Blue Quills) & #16-18 Blue Wing Olives (Baetis) in the permanent C&R section. For freshly stocked trout, small egg flies & Woolly Buggers are usually deadly, along with other standard nymphs & streamers. Fishing is definitely picking up again with the mild weather, Hendrickson hatch, and frequent stocking by the state (they've been stocking almost every day this week!). It's been good all up & down the river, from the dam in Riverton all the way down to Unionville . Don't limit yourself to only the more popular sections of the river, as there is literally excellent fishing all over it.

Nymphing has still been the most consistent way to catch trout early in the season on the Farmington, and some VERY nice trout have been landed on them this winter & early spring. It's how I catch  Underneath the water use Hendrickson-type Nymphs (brown mayfly) # 12-14, Olive/green Caddis larva #14-16, Prince Nymphs #12-16, Quasimodo Pheasant Tails #12-18, Strolis Dark Brown Quill Jigs #10-14, Strolis Rock Candy (olive, green) 10-12, Black Stoneflies #12-16, Golden Stoneflies #8-12, Zebra Midges #18-20, and Hot Spot Nymphs #12-16.
Posted by UpCountry Sportfishing at 9:15 AM