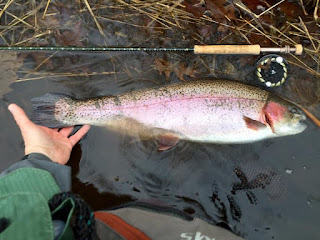 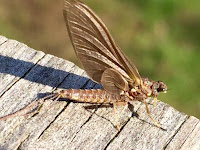 I went out for a couple hours after work on Saturday (Opening Day), managed to get this 26" (yes I measured it!) fatty rainbow in my net- the length/girth formula put it at 8.6 pounds.  This was one of the many large trout that get stocked in the river just before Opening Day, notice the beat up tail. Still a lot of fun on my 11' #3 Sage ESN. Caught it on a #16 nymph and 5x tippet. Hendrickson hatch is finally starting in the permanent Catch & Release section in New Harford/Pleasant Valley, received multiple good reports late on Sunday. The hatch came off on the later side, starting around 3pm. I saw quite a few behind the store when I got out of here a little after 5pm. The Farmington is currently an excellent & clear total flow of 303cfs in the permanent Catch & Release area (161cfs from the dam in Riverton, 142cfs from the Still River).  Starting Monday, highs all move into the 50's for Monday through Thursday, and into the 60's-70's Friday through Sunday.

Hendricksons #12-14 started hatching in the Collinsville/Unionville area a week or two ago and have moved upriver into the lower half of the permanent Catch & Release area now, and warm weather this upcoming week should crank up the hatch and keep it moving upstream, I imagine we will see spinnner falls in the C&R section by the weekend. The mild winter & mostly warm spring has the early spring hatches about 2 weeks ahead of schedule. Some days last week there were good hatches of both #18 Mahogany Duns (aka Paraleps/Blue Quills) & #16-18 Blue Wing Olives (Baetis) in the permanent C&R section, and there were rising fish at moments. For freshly stocked trout, small egg flies & Woolly Buggers are usually deadly, along with other standard nymphs & streamers.
Fishing has been good all up & down the river, from the dam in Riverton all the way down to the Route 177 bridge in Unionville . Don't limit yourself to only the more popular sections of the river, as there is literally excellent fishing all over it. In addition to the Hendricksons, we are seeing the following in the permanent C&R section: Winter Caddis # 20-24 (mornings), and Black Stoneflies #14-16, Mahogany Duns/Paraleps/Blue Quills #18, Blue Wing Olives/Baetis #18 & Midges #22-32 have been hatching in the afternoons and bringing good reports of trout rising to dry flies on milder, less windy days.

Nymphing has still been the most consistent way to catch trout early in the season on the Farmington, and some VERY nice trout have been landed on them this winter & early spring. Underneath the water use Hendrickson-type Nymphs (brown mayfly) # 12-14, Olive/green Caddis larva #14-16, Prince Nymphs #12-16, Quasimodo Pheasant Tails #12-18, Strolis Dark Brown Quill Jigs #10-14, Strolis Rock Candy (olive, green) 10-12, Black Stoneflies #12-16, Golden Stoneflies #8-12, Zebra Midges #18-20, and Hot Spot Nymphs #12-16.
Posted by UpCountry Sportfishing at 8:57 AM