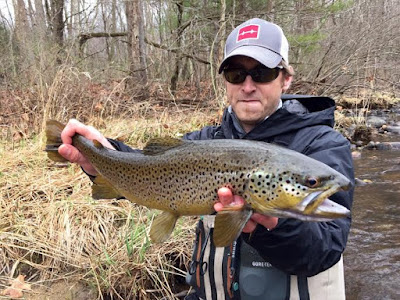 Derrick Kirkpatrick of CT Fish Guides with a trophy 20" plus Farmington River brown trout from this past weekend. Perfect fish, and fat too. A #8 Stonefly nymph did the trick for him. Bigger #6-10 stones don't always catch the most, but often they catch the biggest. Well we WERE getting April/May weather in March, and now it 's snowy February weather in April- welcome to New England! Ten Day Forecast sees lows from the teens (Mon & Tues nights), and highs up to 60 degrees. Back to mostly 40's-50's starting Wednesday. Don't forget CT Opening Day is this Saturday April 9th at 6am. We are stocked to the gills. The Farmington is currently 267cfs through the Catch & Release area (159cfs from the dam in Riverton, 108fs from the Still River), and was stocked for the second time this spring by the DEEP last week with 2,400 trout (except for permanent C&R section, that gets hit after Opening Day). Hendricksons #12-14 are hatching in the Collinsville/Unionville area and are beginning to move upriver, with a few being sighted in New Hartford. Look for a fishable hatch of Hendricksons in the permanent C&R section when the temps warm back up soon. The mild winter & mostly warm spring has the early spring hatches about 2 weeks ahead of schedule.

Fishing has been good all up & down the river, from the dam in Riverton all the way down to the Route 177 bridge in Unionville . Don't limit yourself to only the more popular sections of the Farmington, as there is literally excellent fishing all over the river. In addition to the Hendricksons in the lower river, we are seeing the following in the permanent C&R section: Winter Caddis # 20-24 (mornings), and Black Stoneflies #14-16, Mahogany Duns/Paraleps/Blue Quills #18, Blue Wing Olives/Baetis #18 & Midges #22-32 have been hatching in the afternoons and bringing good reports of trout rising to dry flies on milder, less windy days. Normally we'd be well over 500+ cfs right now (today's historically "normal"flow would be 723cfs per USGS), instead we are under 300cfs, which gives you more of a window at dry fly fishing & easier wading. To a degree, lower flows like this equals more rising trout (less efficient for them to feed on the surface during higher flows).

Nymphing has still been the most consistent way to catch trout early in the season on the Farmington, and some VERY nice trout have been landed on them this winter & early spring. Underneath the water use Hendrickson-type Nymphs (brown mayfly) # 12-14, Olive/green Caddis larva #14-16, Prince Nymphs #12-16, Quasimodo Pheasant Tails #12-18, Strolis Dark Brown Quill Jigs #10-14, Strolis Rock Candy (olive, green) 10-12, Black Stoneflies #12-16, Golden Stoneflies #8-12, Zebra Midges #18-20, and Hot Spot Nymphs #12-16.
Posted by UpCountry Sportfishing at 8:51 AM