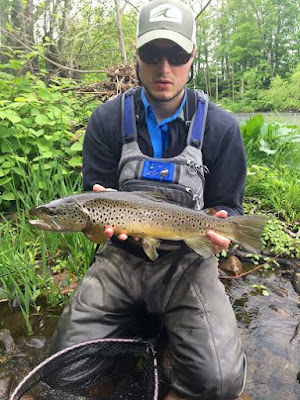 Wade Schools with a 21.5" Farmington River brown trout, wow!  I guess sometimes the Early Bird really does get the worm. FYI Wade is the younger guy who works in the shop, and also ties some of his deadly nymphs that you see in our fly bins. Water levels & temps are fantastic- medium, clear and very nice: 354cfs in the permanent C&R section (New Harford/Pleasant Valley), with 304cfs from the dam in Riverton, and 50cfs from the Still River. Water temps are averaging low 50's- colder than that up near the dam in Riverton (above the Still River, which runs warm), and higher downriver (Collinsville/Unionville) in the late afternoons. While other trout streams in the Northeast are very low and starting to warm up during the hot weather this past week, we are nice & cold with a great water level due to a bottom release out of the deep reservoir (Hogback/Goodwin Dam) up in Riverton.

March Browns/Gray Fox #10-14 are currently a very good hatch on the Farmington. This is typically a "trickle hatch" that starts mid/late afternoon, one here and one there straight through the evening (similar to Isonychia), typically heaviest in the early evening. FYI they hatch in faster water, as they live under the rocks in pocket water. The nymphs migrate to the edges about 1 week prior to hatching. Hatch typically goes close to 4 weeks. You can use a specific nymph pattern subsurface, or fish a Hare's Ear or Fox Squirrel nymph. Blind fishing dries in the broken water can work too, as trout will be on the lookout for them from late afternoon onward. We are just starting to get reports of a few #14-16 Sulfurs downriver in Collinsville/Unionville. Caddis are all up & down the river, both #14-18 tan ones & #16-18 green/olive bodied- they are active from mid/late morning right into the evening. Larva, pupa, wet flies/soft-hackles, and dries are all possibilities with the Caddis, depending upon the time of day and whether they are hatching or egg-laying. A pupa or soft-hackle hung 12" off the back of a dry can be deadly when they are rising to Caddis. Vitreus (aka Pink Lady/Pink Cahill, Pale Evening Dun, etc.), a #12-16 pseudo Sulfur-type mayfly, are hatching from anywhere from the Still River downstream to Unionville and below, they typically hatch between late afternoon & evening (can be earlier on cooler, cloudier days). In addition to matching dries like the Usual and others, wets/soft-hackles work great during that hatch, as the winged dun pops out of the nymph on the stream bottom & swims to the surface, so a swinging orange or yellow bodied soft-hackles/wets can be very effective in broken water.

Most Caddis look tan when in the air, so make sure to catch one in hand and flip over to look at the body color. When in doubt, try both colors, the trout will tell you which one they prefer. Tan/light brown, however, IS the predominant color right now. Nymphing the medium to fast water with #14-16 Caddis pupa is deadly, and swinging wet flies/soft-hackles is also very effective when they are both hatching and egg-laying. Be aware that this bug is frequently is most active in low-light conditions with mild air temps (overcast, warm, cloudy/drizzly days can be fantastic), but don't rule out midday hatches in the sunshine either, especially on a cold rivers below dams like on the Farmington River. On really bright sunny days, Caddis normally get more active when the sun drops low on the horizon & shadows appear.

The 6+ mile permanent Catch & Release section was stocked in late April with 6,000 trout (including 1,000 large Two Year Old Survivor Strain Farmington River Brown Trout), as you might imagine its been fast & furious there at moments. Many anglers are doing well lately, with quite a few landing larger trout- both recently stocked and holdovers. Move around if you aren't doing well, the trout are literally all over. Also play around with techniques, because dries, wets/soft-hackles, nymphs & streamers are all catching at moments. Don't be afraid to venture outside of the C&R section, there are plenty of trout outside of it. The Two Year Old Farmington River Survivor Strain brown trout that the state recently stocked have a clipped adipose and a chartreuse green elastomer tag behind their left eye, and they typically average 14-18" are are unusually fat when stocked. The adults/yearlings are right eye red for 2016, and they will typically run 6-12". Some of these will hold over and become, big beautiful trout, so don't complain while you are catching 6-8" Yearling Survivor Strain browns, they are future trophies with fantastic genetics and will be extra pretty when they grow to a larger size.