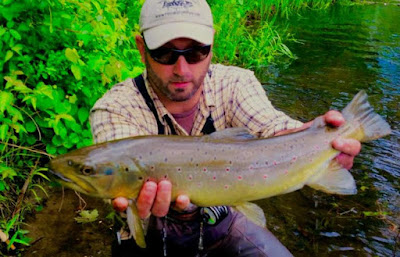 Guide Zach St. Amand with yet ANOTHER big brown- this is a wild 22 1/4" brown caught on a Sulfur Dry over the weekend. I caught the same fish on a nymph a year ago, it grew 1 1/4" during that time period. Absolutely beautiful trout with unique red spotting on it. Sulfurs averaging a #16 (I think it's mostly Dorothea's now) are still the glamour hatch, but there are a ton of other bugs hatching too. Seeing a FEW #10 Iso's (Isonychia, also known as the Slate Drake or Dun Variant) in the lower part of the C&R section, should be a full-blown hatch  by this weekend. They've been hatching down in Collinsville/Unionville for at least a week. Water level, temps & clarity are all excellent, 325cfs total flow in the permanent C&R section (New Harford/Pleasant Valley), with 281cfs from the dam in Riverton, and 44cfs from the Still River. Water temp was 53 degrees Saturday evening in the lower part of the C&R section when I fished after work- it's colder than that up near the dam in Riverton (above the Still River, which runs warm), and higher downriver (Collinsville/Unionville) in the late afternoons on warm/sunny days. Long Range Forecast has highs averaging in the mid 70's through the low 80's, with lows in the 50's. Hatchwise, it's the beginning of "Crazy Time" now- Sulfurs, assorted Caddis (especially tan), March Brown/Gray Fox, and Vitreus (Pink Lady) are all hatching in the Catch & Release area. Even seeing a few #12-14 Light Cahill & #10 Isonychia. Some days, like Sunday, the "evening hatches" have started at lunchtime (happens mostly commonly on cooler/cloudy days).  March Browns/Gray Fox & Vitreus (Pink Ladies) are getting light in the C&R section, but you will see them up in Riverton due to the colder water near the dam. Nymphing remains effective all day, with skilled nymphers giving us great reports. Caddis pupa in tan has been a consistent producer.

Isonychia, or Iso's, are JUST STARTING to show up in the C&R section, but they been a legitimate hatch down in Collinsville/Unionville for at least a week now. I'd expect a fully developed hatch in the permanent Catch & Release area by this weekend. Like the March Browns/Gray Fox, they are a "trickle hatch", coming off one here & one there, heaviest from mid/late afternoons through early evening normally. Cooler, cloudy days can see them start earlier. They are a big bug, with a gray/brown body and medium to dark gray wings, and very light colored legs. They like faster water- pool heads, riffles, pocket water & rapids. The nymphs are excellent swimmers, they can rapidly dart 6-12", just like a small minnow. The June/July batch averages a #10 on the Farmington, but they can be as big as a #8, and as small as a #12. They get smaller later in the summer, and even smaller in the fall. You can blind fish Iso dries, and nymphing with Iso-type nymphs can be very effective. If nymphing, try both dead-drifting, swinging, and stripping them. Overall I do best on the dead-drift, but I've seen many days when the trout won't eat your nymph if you don't move it. Iso's migrate shoreward and often crawl out on rocks to hatch, but some emerge on the surface just like most other mayflies. Specific Iso nymphs, emergers, duns & spinnners all have their moments. You can also fish bigger #10-12 Prince Nymphs & Adams dry flies to match this bug.

Sulfurs are hatching from just below the Still River in Riverton (but not above it yet), all the way down to Unionville & below. Average size is #16. Look for spinner falls at dusk, they bring big trout to the surface. Make sure you have duns, emergers & spinners. Nymphing with #16 Quasimodo Pheasant Tails & Sulfur nymphs has been effective in the afternoons & evenings.