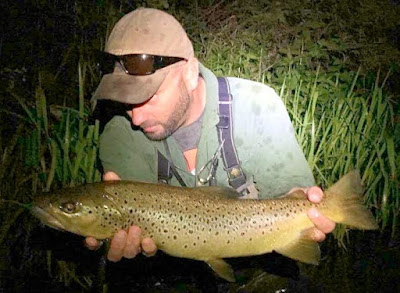 Guide Zach St. Amand with a measured 23" brown, on a Sulfur dry at dusk, yowza. Sulfur hatches get big trout all fired up, with both dries & nymphs catching trophies sometimes. Water remains at a beautiful medium level, 319cfs total flow in the permanent C&R section (New Harford/Pleasant Valley), with 258cfs from the dam in Riverton, and 44cfs from the Still River. Water temps are still averaging low/mid 50's in the C&R section - colder than that up near the dam in Riverton (above the Still River, which runs warm), and higher downriver (Collinsville/Unionville) in the late afternoons on warm/sunny days. 10 Day Forecast shows highs in the 70's through Monday, moving into the 80's after that. Long Range lows all average in the 50's, not bad. Sulfur hatches have been good this week. Look for them in the evenings, but... we've been getting reports of afternoon hatches too (#14-16). The cool weather yesterday had everything hatching heavy in the afternoon- Sulfurs, March Brown/Gray Fox, Vitreus, and Caddis. Nymphing remains deadly, with skilled nymphers giving us great reports. We are also seeing March Browns/Gray Fox, assorted Caddis (tan is the dominant one), and Vitreus (Pink Lady).

Sulfurs are hatching from just below the Still River in Riverton (but not above it yet), all the way down to Unionville & below. Average size is #16, but we are seeing some #14's too. Guide Zach tells me he is seeing the smaller yellow/orange Dorothea Sulfurs (#16-18) down in Collinsville/Unionville. Up in the C&R section I've mainly been seeing what I think are the Invaria, averaging a #16, with some as big as #14. Look for spinner falls at dusk, they bring big trout to the surface. Nymphing with #16 Pheasant Tails & Sulfur nymphs has been effective in the afternoons & evenings.

March Browns/Gray Fox #10-14 are still hatching. This is typically a "trickle hatch" that normally starts mid/late afternoon, one here and one there straight through the evening (similar to Isonychia), typically heaviest in the early evening. FYI they hatch in faster water, as they live under the rocks in pocket water. The nymphs migrate to the edges about 1 week prior to hatching. You can use a specific nymph pattern subsurface, or fish a Hare's Ear or Fox Squirrel nymph. Blind fishing dries in the broken water can work too, as trout will be on the lookout for them from late afternoon onward. If you like to fish wet flies/soft-hackles, standing near the shoreline and swinging a March Brown wet fly back toward the banks can also be very effective when they are emerging in the latter hatch of the day.

Caddis are all up & down the river, both #14-18 tan ones & #16-18 green/olive bodied- they are active from mid/late morning right into the evening. Larva, pupa, wet flies/soft-hackles, and dries are all possibilities with the Caddis, depending upon the time of day and whether they are hatching or egg-laying. A pupa or soft-hackle hung 12" off the back of a dry can be deadly when they are rising to Caddis.

Vitreus (aka Pink Lady/Pink Cahill, Pale Evening Dun, etc.), a #12-16 pseudo Sulfur-type mayfly, are hatching from anywhere from the Still River downstream to Unionville and below, they typically hatch between late afternoon & evening (can be earlier on cooler, cloudier days). In addition to matching dries like the Usual and others, wets/soft-hackles work great during that hatch, as the winged dun pops out of the nymph on the stream bottom & swims to the surface, so a swinging orange or yellow bodied soft-hackles/wets can be very effective in broken water. Hare's Ear bodied soft-hackles and Partridge & Green soft-hackles work great to imitate the Caddis- either swung, dropped under a dry, or dead-drifted deep in a nymph rig with split shot (or with a weighted nymph).

Most Caddis look tan when in the air, so make sure to catch one in hand and flip over to look at the body color. When in doubt, try both colors, the trout will tell you which one they prefer. Tan/light brown, however, IS the predominant color right now. Nymphing the medium to fast water with #14-16 Caddis pupa is deadly, and swinging wet flies/soft-hackles is also very effective when they are both hatching and egg-laying. Be aware that this bug is frequently is most active in low-light conditions with mild air temps (overcast, warm, cloudy/drizzly days can be fantastic), but don't rule out midday hatches in the sunshine either, especially on a cold rivers below dams like on the Farmington River. On really bright sunny days, Caddis normally get more active when the sun drops low on the horizon & shadows appear.

Nymphing has been a very consistent way to catch trout when they aren't rising, and some truly large fish are getting caught on them. Subsurface effective patterns include: March Brown Nymph #10-14, Caddis Pupa #14-16 (tan, olive/green, brown), Quasimodo Pheasant Tails #14-18, Sulfur nymphs #14-16, 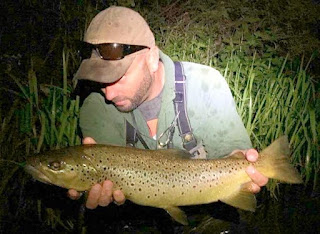