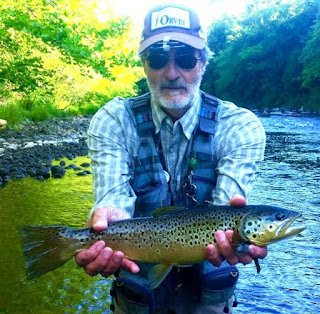 Sweet Farmington River summertime brown by Paul D'Amato, client of Zach St Amand. No major changes since my last report. We are still low in flow, albeit as I write this it's up about 15cfs with a total flow of 81cfs & dropping (59cfs from dam in Riverton, 22cfs & dropping from Still River). Fish from from New Hartford center to the Goodwin Dam to stay in the trout-friendly water temps, they've been averaging low to mid 60's through most of that stretch, with coolest temps closest to dam. Staring early in the day, work your way upstream closer to the dam. You won't see water temps above the low/mid 60's in Riverton, even at the day's end. Tricos are a major morning hatch in the permanent Catch & Release, upstream at least as far as Pipeline. The next few nights will only drop into the mid 70's- this means to catch the Trico Spinners #22-26, arrive near daybreak. They fall early on hot summer mornings, it's based on air temps for the spinners. We are on the tail end of the Needhami Dun #20-26, you may see a few but they are definitely toward their end. Summer/Winter Caddis #18-22 are hatching in the mornings in good numbers. As always, smaller nymphs fished in the riffles with take trout all day, and terrestrials such as beetles & ants can put trout in the net for you during the late morning and afternoons. Streamers should be downsized, and are best at first & last light. Evenings will see Isonychia #10-12 , Blue Winged Winged Olives #20-26, Rusty Spinners #18-26, Caddis #16-22 (tan, black, olive), Light Cahills/Summer Stenos #12-22, and Midges #22-28. Riverton will see many of the same bugs,  though with the colder water there the Tricos haven't arrived upstream yet. Evening fishing often kicks off earlier in Riverton, also due to the cooler water near the dam.

New Sage & Redington rods have arrived at the store: the hot new Sage X (replaces the ONE), the new version of the Sage ESN, and the Redington Trout Spey rods in 2-4wts are all in stock and online as well. We still have a bunch of both demo & new Sage ONE's, Circa's and ESN's on sale, priced to sell. Current stock is listed on our website if you can't make it in to the store. Our George Daniel Nymph & Streamer Clinics are coming up in September & October and are filling fast. George is one of the premier nymph and streamer fisherman for our generation so don't miss an opportunity to learn from the best. Give us a call to reserve a spot.

The MDC has reduced the flow from the dam over the last few weeks This is due to the lack of rainfall combined with no snowpack this past winter. I'm amazed they were able to keep the flow normal for so long, kudos to them. Unless we get a lot of rain, I suspect we will see a low release in August & September.  Despite the low water, we are getting some really good reports, both in terms of numbers & size caught. The downside of fishing in low water is that you can spook trout easier and there is less good holding water. The upside is that it concentrates the trout, making it easier to locate where they are holding and when there is a hatch, many trout will feed on the surface. Don't neglect knee deep water right now, especially if it has a riffled surface- it can hold surprisingly large trout, and also more trout than you might think.

Somebody turned in a very nice camera they found in the woods recently, call the shop at 860-379-1952 if you can identify it. Despite being outside in the rain, it appears to be in working order.

Summertime Fishing Advice:
The trout have been getting caught & released for months, the water is the lowest of the year. Lower flows means it is easier to spook the trout, so a stealthy approach can be very important, especially on flat water pools and trout laying in skinny lies. Trout sipping bugs on flat water requires using better techniques to drift the fly. Use a Reach Cast, which helps present your fly to the fish before your leader, and also usually makes it easier to get a drag-free float. Longer leaders (12' and up to 15' +), lighter lines (#2-4), lighter tippets, smaller flies, proper fly selection, accurate casts, and drag-free presentations are the keys to unlocking the puzzle. Many anglers think they are getting a drag-free float, when in reality they are getting micro-drag they cannot see. Longer tippets & shorter casts will help give you a natural, drag-free presentation, and as flies get smaller you need to lighten your tippet. For all but the biggest dries, think 6x & even 7x tippet (for tiny flies like the #24 Tricos for example), for Isonychia and big foam terrestrials you can do 5x and even 4x (it's a bigger, more wind resistant fly, and you are usually fishing it in the fast water). If it's not too windy and you are able to turn your dry fly over, lengthening your tippet out to 3 or even 4 feet will do wonders for reducing drag, it will give you the same effect as dropping down 1-2 tippet sizes.

For nymphers, some of the same advice for the dry fly guys applies to you too. Longer leaders (12' or even longer, Euro-style nymphers often use 30+ foot leaders or pure mono set-ups), accurate casts, and drag-free floats are all very important. While there are exceptions (#6-12 Stonefly nymphs & #10-12 Isonychia nymphs), I frequently find smaller nymphs (no bigger than #16-20 patterns if tied on short-shank curved scud hooks, and #18-22 if tied on standard hooks) to be the key to success many days in July, August & September. Many of the natural bugs are smaller this time of year, and our highly pressured trout seem less suspicious of smaller flies too. Use a two fly rig with a bigger fly, but make your second pattern something SMALL. If one of your flies is gaudy, flashy or has a hot-spot, make sure your second pattern is drabber & more natural (maybe beadless or with a black or brown bead instead of a shiny gold, copper or silver one). Usually 5x fluorocarbon tippet is light enough, but sometimes in pressured spots (like Church Pool) I'll go down to 6x, especially if it's sunny, the water is low, and the flies are small. If you like TroutHunter fluoro tippet, they do in-between sizes: 4.5x, 5.5x & 6.5x- I use the 5.5x a lot in the summertime, and so do some of the guides. Lots of trout pile into FAST water in the summer, so make sure to make some casts there. Big Stones, many Caddis larva/pupa, and certain Mayflies all live in faster water, so put your flies where the food (and the trout) are.