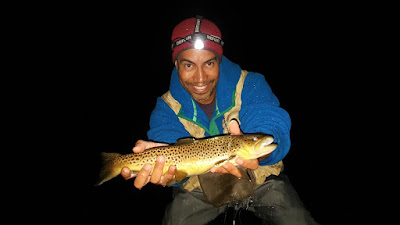 We are opening at 7am (instead of 6am) this Sat/Sun 10/1 & 10/2. Pictured is Jose Vega, successfully working the night shift. Despite continued low water, still getting good fishing reports, and some rain is on the way for today and this weekend- we need lots & lots of rain. #16-18 tan/brown Caddis and #12-14 Isonychia (also known as Slate Drakes or Iso's) are both ramping up with the cooler, more normal fall weather here now. Streamers could also be good this weekend in the low light, just downsize them for the low water conditions. Caddis and Iso's are both active emergers, and so are great candidates for a wet fly/soft-hackle swing on a down & across presentation. Terrestrials continue to be best dries for late morning through mid/late afternoon, and Iso's are hatching starting as early as mid-afternoon on cooler, cloudy days. The overcast & damp weather may get Blue Winged Olives (BWO's) hatching too. As has been the case, small nymphs fished in the faster water are consistent producers. You can also do Dry/Dropper and drop a small beadhead nymph under a larger buoyant dry (such as an Iso or Mini Chernobyl). Look for the FRAA to stock 1,000+ rainbows & brook trout in the upper river in early October, as well as 1,000+ browns from the MDC. Don't have exact dates, but it will be soon. The state was spotted stocking trout down in Collinsville earlier this week. Flow is currently 66cfs in the permanent Catch & Release area in Pleasant Valley/New Hartford  (60cfs at the dam in Riverton, with an additional 6cfs from the Still River).

Despite two straight months of unusually low water, there is still plenty of deeper water in the main pools & deeper runs. Where you find some trout, you are apt to find many. Just skip the shallower sections and focus on water with more depth. Make your leaders longer (12' or even more), and use mostly smaller flies to match the conditions & mostly smaller bugs that are hatching. The biggest exception to the small flies would be the Isonychia, which are currently running from #10-14. Still seeing #6-10 big Stonefly nymph shucks on the rocks in the fast water, so a #8-12 Stonefly nymph imitation is still a good choice, especially in the mornings when they are most active. #16-18 tan/brown Caddis are getting increasingly active in the mornings & evenings, they constitute a significant hatch here in the fall- make sure you have both #16 pupa & #16-18 dries in tans/browns to properly imitate them. Soft Hackles can work well for them too.

FYI we are overflowing with used rod & reels from trade-ins recently. We have many inexpensively priced ones that are not listed on our website. Those not listed are for walk-in customers only, so please don't call on the phone and ask us to run through them. We don't like to list rods online with much wear on them, plus the free shipping makes it unprofitable to sell them online, hence we only sell them IN the store.

Colebrook Reservoir (which is the main/bigger reservoir that feeds the Hogback/Goodwin Dam) remains very low and they need to conserve what they have left, so until we get many, many inches of rain, expect a minimal release from the dam. However, each rain will temporarily increase tributary flows, which all add to the flow of the Farmington, with the Still River being the main one (up in Riverton, right below Rt 20 bridge). The downside of low water is obvious: less good spots & spookier/pickier trout that are focusing on smaller bugs/flies, the upside is that it concentrates trout in the deeper water that has some current, and they are more prone to surface feed during a hatch because it's more efficient in shallower/slower water than it is in deeper/faster water. Despite the low water conditions, many anglers are experiencing good fishing, plus it's keeping the fishing pressure down lower than it would normally be.

The upper river was stocked with 2,000 trout for Labor Day. They were stocked from the Goodwin Dam/Hogback in Riverton, downstream to Whittemore Pool which is at the northernmost point of Peoples State Forest, above the Campground, and Monday 9/26 the state stocked downriver in Collinsville. We are  starting to see the smaller tannish/brownish smaller fall Caddis in about a #16-18  both in the morning & evenings, look for them especially in broken, riffly water. Also seeing #20-24 Summer/Winter Caddis in the AM. Tricos are  done, but you may still see a few stragglers in the mornings up in Riverton. The best afternoon dry fly action remains with terrestrials- Ants, Beetles, Hoppers and Mini Chernobyls have been excellent for bringing trout to the surface even if they are not rising (drop a small beadhead nymph off the hook bend to up your odds). The cooler fall temps are getting the Isonychia hatching as early as mid/late afternoon now. Evenings are seeing Blue Wing Olives #20-24, Tan/Brown Caddis #16-18,  Isonychia #12-14 (fast water only), White Flies #12-14, Yellow Sally Stoneflies #14-16, Midges #24-28, Summer Steno/Light Cahill #16-20, Rusty Spinnners 18-24. Smaller nymphs #16-22 are a good choice anytime of day.  Bigger #8-12 Stonefly nymphs (brown, yellow/golden) are working in the AM, and you can try #10-14 Iso nymphs from late afternoon through the evening (try also swinging a #10-12 Leadwing Coachman  wet fly in the faster water when Isos are active, deadly). #14-16 Yellow Sally Stonefly nymphs are a good choice throughout the day (you will see their shucks on the rocks, they look like miniature Golden Stones and can run from #14-20). FYI #16 Sulfur nymphs will double nicely as a Yellow Sally nymph.

UpCountry has just acquired $30,000 of Simms closeouts that are now on sale. There is a huge selection of Mens & Womens: Gore-tex jackets, packs, slings, shirts, pants, tee shirts, shoes, wading boots, and waders. Sizes are limited and there are only a couple of each item so when they are gone they are gone. In addition to the Simms items we will be closing out Lamson Litespeed Reels, Sage "One" Rods, Scott A4 rods, and Temple Fork Outfitters Deer Creek Spey rods. There is also a large selection of used freshwater/saltwater rods and reels from Sage, Orvis, TFO, Redington, Scott, Winston, including some that are not listed for sale on our website. The fly tying bargain bin is currently overflowing with saltwater bucktails, necks, saltwater hooks, Mustad freshwater hooks and more.

Late Summer/Early Fall Low Water Fishing Advice:
The trout have been getting caught & released for months, and the water is very low. Reduced flows means it is easier to spook the trout, so a stealthy approach is very important, especially on flat water pools and trout laying in skinny lies. Trout sipping bugs on flat water requires using better techniques to drift the fly. Use a Reach Cast, which helps present your fly to the fish before your leader, and also usually makes it easier to get a drag-free float. Longer leaders (12' and up to 15' +), lighter lines (#2-4), lighter tippets, smaller flies, proper fly selection, accurate casts, and drag-free presentations are the keys to unlocking the puzzle. Many anglers think they are getting a drag-free float, when in reality they are getting micro-drag they cannot see. Longer tippets & shorter casts will help give you a natural, drag-free presentation, and as flies get smaller you need to lighten your tippet. For all but the biggest dries, think 6x & even 7x tippet (for tiny flies like the #24 Tricos for example), for Isonychia and big foam terrestrials you can do 5x and maybe even 4x (it's a bigger, more wind resistant fly, and you are usually fishing it in the fast water). If it's not too windy and you are able to turn your dry fly over, lengthening your tippet out to 3 or even 4 feet will do wonders for reducing drag, it will give you the same effect as dropping down 1-2 tippet sizes. FYI the main reason for lighter tippets is not so much so the trout cannot see it (I don't believe going down 1/1,000 of an inch suddenly makes your line invisible), but rather to get a better drag-free natural presentation with smaller/lighter flies, which is easier with thinner, limper, and more flexible smaller diameters. Thinner tippet is also more prone to land in "S" curves and create slack for a drag-free float. If your tippet lands poker straight, say hello to instant drag.

For nymphers, some of the same advice for the dry fly guys applies to you too. Longer leaders (12' or even longer, Euro-style nymphers often use 30+ foot leaders or pure mono set-ups), accurate casts, and drag-free floats are all very important. While there are exceptions (#8-14 Stonefly nymphs & #12-14 Isonychia nymphs), I frequently find smaller nymphs (no bigger than #16-20 patterns if tied on short-shank curved scud hooks, and #18-22 if tied on standard hooks) to be the key to success many days in late summer/early fall. Many of the natural bugs are smaller this time of year, and our highly pressured trout seem less suspicious of smaller flies too. Use a two fly rig with a bigger fly, but make your second pattern something SMALL. If one of your flies is gaudy, flashy or has a hot-spot, make sure your second pattern is drabber & more natural (maybe beadless or with a black or brown bead instead of a shiny gold one- trout see TONS of gold bead flies). Usually 5x fluorocarbon tippet is light enough, but sometimes in pressured spots (like Church Pool) I'll go down to 6x, especially if it's sunny, the water is low, and the flies are small. If you like TroutHunter fluoro tippet, they do in-between sizes: 4.5x, 5.5x & 6.5x- I use the 5.5x a lot in the summertime, and so do some of the guides. The competition anglers use the 6.5x a lot. Thinner tippets also sink your nymphs faster due to less water resistance. Many trout pile into FAST water in the summer, so make sure to make some casts there. Big Stones, many Caddis larva/pupa, and certain Mayflies (Isonychia for example) all live in faster water, so put your flies where the food (and the trout) are.

If you like our fishing report, please consider buying your gear from us. We generally ship the same day, for free anywhere in the country on all but the smallest orders. Our shop can only exist with your patronage.
Posted by UpCountry Sportfishing at 9:23 AM